84th precinct’s top cop is moving on to Bushwick 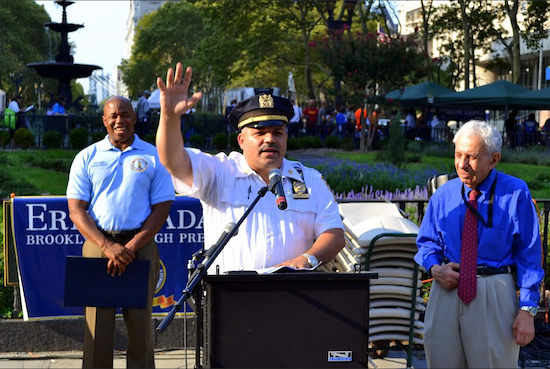 The 84th Precinct’s top cop is stepping down. As of Monday morning, NYPD Captain Maximo Tolentino is no longer in charge of the 84th Precinct. He will be the new Commanding Officer of the 83rd Precinct in Bushwick.

“It was a fantastic experience working at the 84th Precinct,” Tolentino said. “I felt that there was a lot of support from the community to get the work done. It was a real eye opener. Some of the challenges that are there are different than other parts of the city. This place can be as demanding with any type of police work.”

Tolentino, a Queens native who took on the job of policing the 84th Precinct back in October 2012, told the Brooklyn Eagle that he is surprised that he’s moving on so quickly. A member of the NYPD for the past 28 years, he added that the move is a positive one and he considers it a promotion.

“It’s going to be more involved in crime fighting, a different type with more violence, but equally as important,” he said. “I’m eager to go there and help them out.”

“He was the executive officer here a while back,” Tolentino said of Centa. “He’s familiar with the place. I think people are going to like him because he’s the right shoe for the right foot. I expect that he’ll do an exceptional job.”

“He’s a guy that we liked,” said Leslie Lewis, the civilian president of the 84th Precinct Community Council. “We have to wish him well because he did a good job and deserves to move on with his career. I’ve been doing this for over 25 years, and he was one of the captains that I liked the best. He just had a way of working with the community.”

“I’m going to miss him,” said Judy Stanton, executive director of the Brooklyn Heights Association. “I think that Tolentino did an excellent job. He was a good communicator. Brooklyn Heights doesn’t have the same kind of crime that other neighborhoods have; it’s a lot of quality of life stuff, but he was always attentive to our needs as a community took our issues seriously.”

Assemblymember Millman recalled an incident during which she was arrested by members of the 84th Precinct while she was protesting plans to close Long Island College Hospital, and said that Tolentino and the officers couldn’t have been more respectful.

Members of the community will have an opportunity to meet the 84th Precinct’s new police captain, Sergio Centa, on Aug. 21, as the 84th Precinct Community Council is hosting a street festival. The block party will be held on Johnson Street between Adams and Cadman Plaza West, rain or shine, from 11 a.m. to 4 p.m. There will be arts and crafts for kids, general merchandize and food on sale as well as entertainment and unique gifts.