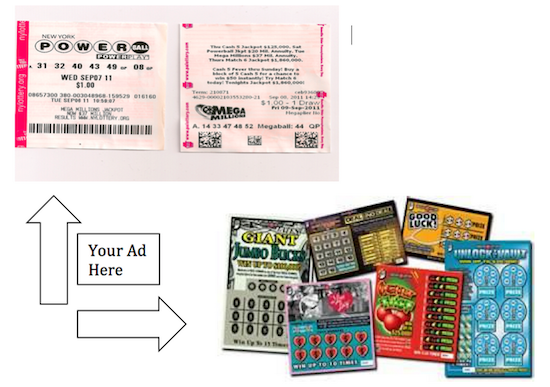 A bill passed by the State Assembly would allow for advertisements on lottery tickets and “quick draw” terminals, potentially earning the city hundreds of millions in revenue without the need for tax increases. Similar legislation is before the State Assembly, and supporters say passage is likely. But the same legislation two years ago never became law, and only a day remains in the legislative calendar.

Like the previous effort, the legislation is sponsored by State Senator Diane J. Savino (D-South Brooklyn), long an advocate for government and authorities to produce revenue through advertising on their assets; such as advertising on buses and bridges. The bill passed in the Senate several days ago by a margin of 58-2.

“Hopefully, in the near future, New York Lottery will have a new way to bring in hundreds of millions in revenue,” Savino said.

Michigan and Massachusetts now allow for ads on their lottery games and keno style “quick draw” game.  Michigan estimates that its ads on lottery tickets and commercials on their quick draw games terminals brought in about $45 million dollars to State coffers in 2013.  Massachusetts Lottery officials have no revenue estimates, as the program only began this year.

“New York State recently participated in a record $654 million power ball lottery–according to lotto officials, an estimated 137 million tickets were sold in New York State alone,” Savino said. “Imagine if all those tickets had advertisements on them that could have raised revenue for New York State. That’s less money we need from your pocket in taxes to run schools and colleges.” Former DA Hynes celebrated for career as a reformer Blackbirds break through in Maine