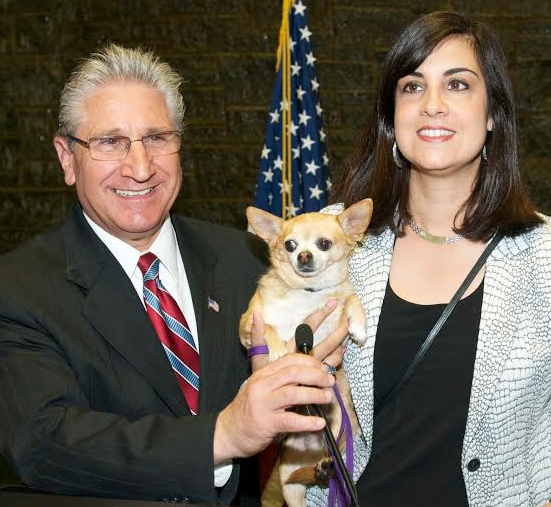 Peanut, a Chihuahua owned by Assemblywoman Nicole Malliotakis, was one of several pets brought to the State Capitol by their owners on Wednesday to illustrate the call for stricter laws to prevent animal cruelty.

It was all part of the Fourth Annual Animal Advocacy Day in Albany, an event that brought lawmakers, their pets, animal advocacy groups, and law enforcement officials together to discuss ways to protect their four-legged friends.

Malliotakis (R-C-Bay Ridge-Staten Island) is the sponsor of several bills to protect animals and increase penalties against animal abusers.

“Animal Advocacy Day is both a celebration of our four-legged friends and an opportunity to rally support for legislation to protect defenseless animals that have no voice,” Malliotakis said.

“Throughout this session, I have been a proponent for animal related legislation, especially my legislation to prohibit animals from being subjected to piercings, tattooing, or unnecessary cosmetic or aesthetic surgeries. Having Peanut with me today provided a great opportunity to put a real face alongside this important legislation. Our pets are some of our closest companions and I will continue to work with my colleagues to make sure New York has the toughest penalties possible for anyone who harms or neglects an animal,” Malliotakis said.

Malliotakis originally introduced the tattoo-ban legislation in 2012 after viewing “Pet Crazy,” a “20/20” documentary on ABC about animal owners who gave their pets surgical procedures with no medical benefit, such as tattoos, piercings and tummy tucks.

She renewed her call for the bill’s passage this year after the New York Post carried a story about Brooklyn tattoo artist “Mistah Metro,” who bragged about inking his dog with a heart and his wife’s name while the animal was drugged after surgery.

A Fox News station in Albany reported that a former Seaworld Killer Whale trainer, a dog from Afghanistan that was adopted by a U.S. Special Forces office, and a disabled dog that uses a wheelchair to walk around, were featured at the event.