SUNY says it’s a 'rumor,' refuses to meet with officials 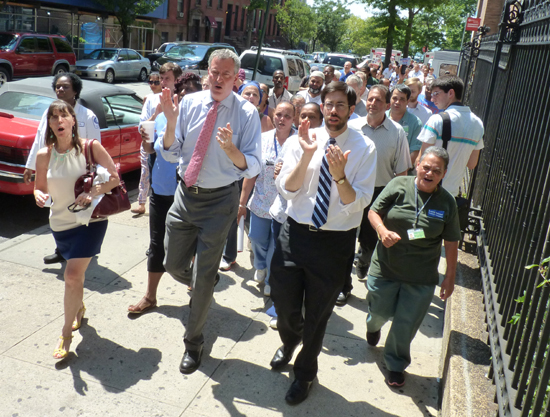 Long Island College Hospital (LICH) doctors say they’ve been told by SUNY Downstate administrators to transfer all their patients out by Friday so that LICH could be shut down by Sunday.

Dr. Alice Garner, head of the neonatal unit at LICH, said “I received verbal orders that we are to transfer all patients by tomorrow so they can shut us down by Sunday. We did not receive one written word to substantiate this. We were told the surgical areas and the G.I. suite will be closed tomorrow in direct violation of the restraining order, putting the community at risk.”

Dr. Garner said that only one baby was left in the neonatal unit. “They want to transfer the baby against the mother’s wishes,” she said. “I will not break the law.”

SUNY claimed late on Thursday, however, that the order was a “rumor.”

Hundreds of protesters shouting “Shame on SUNY!” gathered in the 97-degree heat outside LICH in Cobble Hill Thursday afternoon after getting the word.

As dozens of cars honked their horns in solidarity, state Sen. Daniel Squadron, Councilman Steve Levin, Public Advocate Bill de Blasio and Councilman Brad Lander told the crowd that SUNY officials refused to meet with them or put the orders in writing, in order to avoid legal culpability. “They’re acting like thieves in the night,” said de Blasio. “I have one question: Where is Mayor Bloomberg? Where is Governor Cuomo? SUNY Downstate is moving more aggressively than ever to shut down the hospital this community needs in violation of a court order. We’re not standing for it. SUNY is violating the law and the public trust.”

All four officials headed into LICH to attempt to meet with hospital administrators, while security guards tried to block their way. The officials and a handful of nurses and staff made it to the administration floor, where they asked to speak to interim CEO James Karkenny.

Karkenny, however, ordered them to leave and threatened to call the police. Sen. Squadron said, “You refuse to speak to elected officials?”

“You’ve been asked to leave,” Karkenny barked. “You barged in illegally!”

Karkenny then locked himself inside his office and refused to come out.

While barricaded on the fourth floor, Sen. Squadron called Carl McCall, head of the SUNY Board of Trustees, explaining that Karkenny “refused to have a private conversation” with elected officials.

“People need to understand a public health emergency is playing out in Brooklyn, and it is SUNY’s fault,” said an exasperated Councilman Levin. “Placing the ambulances on diversion at LICH has overwhelmed other hospitals in the area. They are putting real people’s lives at risk. It’s abhorrent and inexcusable.”

Councilman Lander said he brought his son to LICH when he has bronchiolitis. “He had to spend a couple of days in the hospital. Where did we take him? LICH. What happens tomorrow if a child in Red Hook gets bronchiolitis? Or if someone in Brooklyn Heights goes into cardiac arrest? People are going to die.”

Levin said that what SUNY is saying contradicts what the staff was told. “In our experience, the staff, doctors and nurses are telling the truth. SUNY refused to meet with us today.”

De Blasio said that he expected a “bait and switch” from SUNY. “They must tell us the full truth about what their intentions are.”

As Thursday’s drama played out statements from representatives across Brooklyn, BP Marty Markowitz and City Council Speaker Christine Quinn came in support of LICH, saying SUNY has “gone rogue” and calling for an independent overseerer.

“Patently false statements and rumors about the immediate closure of LICH obfuscate the truth, which is SUNY’s commitment to securing proposals to provide healthcare services in the community.  While SUNY has made it clear that it will not continue to operate LICH, as is reflected in the state-approved sustainability plan for Downstate, the hospital is not closing this weekend. No hospital in New York State can close without the approval of the Department of Health.”

LICH Dr. John Manny confirmed, however, that LICH’s operating rooms were closing Friday, “at the end of shift.”