Community board chairman calls on members to report sex trafficking 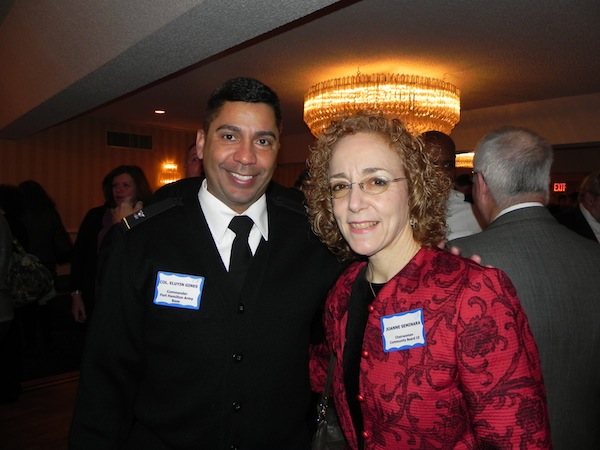 Seeking to bring a shocking crime out of the shadows and into the spotlight, a Brooklyn community board chairman called on her members to report sex trafficking to police if they see evidence that it is taking place.

Calling it “an evil that is easy to ignore because it takes place tucked away behind the closed doors of residences and commercial establishments,” Seminara said sex trafficking is a horror.

The crime’s victims are usually immigrant girls, who are hustled into the US and then enslaved by sex traders.

“I suggest that it is time that we open our eyes and take action to protect powerless victims and bring its perpetrators to the justice they deserve,” Seminara, a lawyer, said.

“Many of whose victims are young teenagers desperate for our awareness and protection. The extraordinary courage of a few victims of this enslavement is making it possible to prosecute these crimes against humanity,” Seminara said.

Government and law enforcement are taking steps to combat it, she said. “Governor Cuomo, in his State of the State address, promised legislation to combat trafficking. Both Manhattan DA Cyrus Vance and our own DA Charles Hynes are making this heinous ‘business’ a priority and devoting considerable resources to it,’ she said.

“But they need our eyes and ears, courage and common sense to be aware enough to report if and when we see evidence that it exists,” Seminara told board members.

“Much of the trade involves Asian girls and women but the trade’s victims also include Russian, Eastern European, Mexican and other Hispanic girls and women who may not be English conversant and have little contact with those who can help them. The trade is very difficult to investigate and prosecute because of the economic and emotional dependence of the victims, especially if they are young. Many traffickers prevent their victims from running away by taking away all their identification documents and threatening harm to their families who are often abroad,” Seminara said.

The average age of entry into the sex trade is 12 to 14 years of age, according to the US Department of Justice.

“It is our moral imperative to help spread the message that there are safe places where victims can seek help. I urge you to join this effort and call the office if you have any information or see signs of this horrific activity anywhere,” Seminara told board members.

While many victims are beaten during their enslavement, it is still a crime, even if physical beatings are not taking place, authorities said.

In October, Hynes announced the sentencing of a sex trafficker, Kendale “Ace” Judge, 21, for forcing a 13-year-old girl into prostitution.

Judge was sentenced to serve six to 18 years in prison.

Judge pleaded guilty to Sex Trafficking, on September 27. In addition to his prison term, when he is released, he will have to register as a sex offender.

Judge met the 13-year-old runaway in 2011 and gained her trust by promising to love and take care of her. But instead he beat her and forced her into prostitution.