All in a busy morning’s work for Hicks Street firefighters 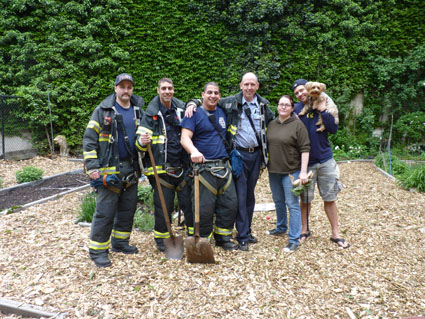 Firefighters with FDNY’s Engine Company 224 trekked to Mickel’s Garden in the Willowtown section of Brooklyn Heights this past Saturday to conduct a fire safety awareness event with South Heights residents.

“We talked to the kids about smoke detectors and having a fire safety plan in the house,” said Lt. Glenn Soans.

While they were there, however, a truckload of mulch arrived — and the crew sprung into action with shovels and wheelbarrows, making short shrift of the heavy job of spreading the wood chips around the community garden.

The story does not end there, however. While helping out with the mulch, word came that an SUV had crashed into a building and collapsed the scaffolding at Remsen and Henry streets, just a few blocks away. The crew dropped their shovels and raced to the scene. (See story about the crash here.)

After securing the site, closing Henry Street and assisting NYPD and the Office of Emergency Management, the firefighters headed back to the garden to help finish the mulch spreading.

And they did all of this before lunch.

To appear at Willowtown Fair on May 19

Engine Company 224 will be holding another fire safety seminar at the upcoming Willowtown Spring Fair on Saturday, May 19 (unless duty calls).

The fair takes place on Willow Place from noon to 5 p.m. and will feature music, a spring plant sale, a jumping castle, games and races.

New trees have been planted on Columbia Place and along the Palmetto Playground on State Street. During the fair two of the trees will be dedicated in memory of longtime local residents Caroline Palestino and Mary Merz, both of whom died last year.