BAY RIDGE — Eighty-Sixth Street is a mess for motorists and for pedestrians. That much everyone seems to agree on.

Traffic experts from the Department of Transportation (DOT) said they’ve come up with a plan to make it safer for everyone.

But the “86th Street Traffic Calming” plan presented by DOT representatives to Community Board 10’s Traffic and Transportation Committee at Fort Hamilton High School on March 14 got a mixed reaction from board members and residents.

Ian Richards, a local resident and the parent of a student at P.S. 185 at 8601 Ridge Boulevard, liked what he heard from DOT at the meeting.

“I’m in support of this plan. I think it’s outstanding,” Richards said. “It could lead to changes in behavior. You will have people making different decisions and better decisions.”

The full membership of Community Board 10, which met on March 19 to vote on the plan, decided to postpone action to give members a chance to learn more about it.

The plan would involve making major changes to the 86th Street corridor from Shore Road up to Fourth Avenue.

The DOT decided to address traffic conditions on 86th Street because the corridor is dangerous, Quirk said. “It is a high pedestrian crash location,” she said.

In 2010, there were 23 accidents in which pedestrians were hit by cars, she said. One of those accidents was fatal, she said.

“We’ve also heard a lot of community concerns,” said Quirk, who noted that there are four schools located along 86th Street, including P.S. 185 on 86th Street and Ridge Boulevard.

There were a total of 54 traffic accidents last year, said Brian Kieran, chairman of Board 10’s Traffic and Transportation Committee. Kieran said the DOT’s analysis showed that the accidents are concentrated mainly at two intersections: 86th Street and Third Avenue, and 86th Street and Fourth Avenue.

Eighty-Sixth Street is in the 88th percentile of dangerous corridors in New York City, according to Quirk, who said that means it is more dangerous than 88 percent of the streets in the entire city.

Similar changes that have been tried in other parts of the city have worked well, Quirk said.

“Accidents were cut in half,” she said.

“Everyone on our committee wants traffic safety,” he said.

The committee members did like some aspects of the DOT plan, including the idea of having turning bays, Kieran said.

Some Board 10 members at the committee meeting took issue with the idea of creating turning bays and the parking lanes, however.

Greg Ahl charged that the turning bays will slow down traffic.

“What’s going to happen is that you’ll get a lot of back-up on 86th Street,” Ahl said.

The creation of a wider parking lane will encourage double parking, which is illegal, board members charged.

Romero said DOT should go back to the drawing board and develop a different plan.

“There are other ways you can accomplish the same thing,” she said. She suggested that the agency change the timing of traffic lights instead. 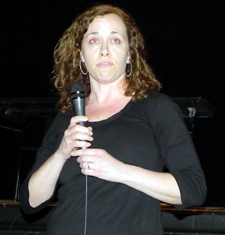 Tressa Kabbez, PTA president at P.S. 185, said she thought it was “extreme” of DOT to bring the changes down to the section of 86th Street that includes her school.

“We want to protect our children. This isn’t doing it,” she said.

Kabbez added that parents have been requesting for several years that DOT install a stop sign on the 87th Street side of the school to increase safety for children crossing that street, “but the plea has been ignored.”

Another resident, Maureen Landers, said she was hit by a car on 86th Street and Fourth Avenue.

“I am still terrified to cross Fourth Avenue,” Landers said. “I am in support of this plan.”