Jonathan, who attends The HeartShare School, on the dance floor with his mother, Marie, at the “Dream Prom” for teens with autism hosted by the 86th Street Kiwanis Club
Share this:

A group of kindhearted Bensonhurst civic leaders made sure that autistic kids ended their school year in style!

Members of the 86th Street Kiwanis Club organized a “Dream Prom” for students from The HeartShare School in Bath Beach and the HeartShare Respite/Recreation Program. The school and the recreation program are sponsored by HeartShare Human Services of New York, a non-profit social services agency headquartered at Metro Tech.

The festivities took place at Sirico’s Catering on 13th Avenue in Dyker Heights on June 24.

Music, dancing, and plenty of good food were enjoyed at the prom.

“I am grateful to the 86th Street Club Kiwanians for generously hosting this event,” said Carol Verdi, HeartShare’s vice president of Education Services. Verdi has been a member of the Kiwanis Club for nearly 20 years.

The prom marked an important milestone in the lives of the students, according to Verdi.

“This is the first time that young people at HeartShare were offered the opportunity to gather together for such an event. For teens with autism, it’s not just about having a good time, but also providing a unique setting to socialize and bond with one another,” she said.

The 86th Street Club is part of Kiwanis International, a volunteer service organization founded in 1915.

Joseph Aiello, New York district governor of Kiwanis International, who recently received a Children’s Champion Award from HeartShare, got the idea for the prom while speaking to Lenny Gioia, a member of the 86th Street Kiwanis Club, about HeartShare’s commitment of service to children with intellectual and developmental disabilities. From that conversation, the idea for the “Dream Prom” was launched.

Parents were also invited to attend. Another guest, Christina Moore, Miss Cosmopolitan 2014, posed for photos with the teens. She greeted the students wearing her pageant gown and crown.

A photo booth was set up to give kids a chance to playfully pose for pictures with friends wearing feather boas, oversized sunglasses and top hats.

“The overwhelming generosity of our members and the community made this event possible. The kids are very appreciative and we’re honored to be hosting them and their families tonight,” said Steve Spinelli, president of the 86th Street Kiwanis Club.

In addition to the boutonnieres and corsages, the Kiwanis Club also donated dresses for the girls to wear to the prom.

Current and former members of the John Dewey High School Key Club volunteered at the event.

“I was a former Key Club member at John Dewey and returned to give back to the community,” said one volunteer, Tina Lee, a sophomore at the State University of New York at Binghamton.

“The HeartShare teens deserve all the attention and care in the world, especially tonight,” said Steve DiGidio, who helped secure a limousine that the teens used for photos. His daughter, Amanda DiGidio, is a teacher assistant at The HeartShare School. 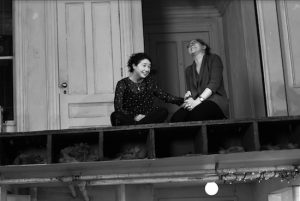 HeartShare to host events each month to mark centennial Giuliani admits he was wrong about Clinton and 9/11