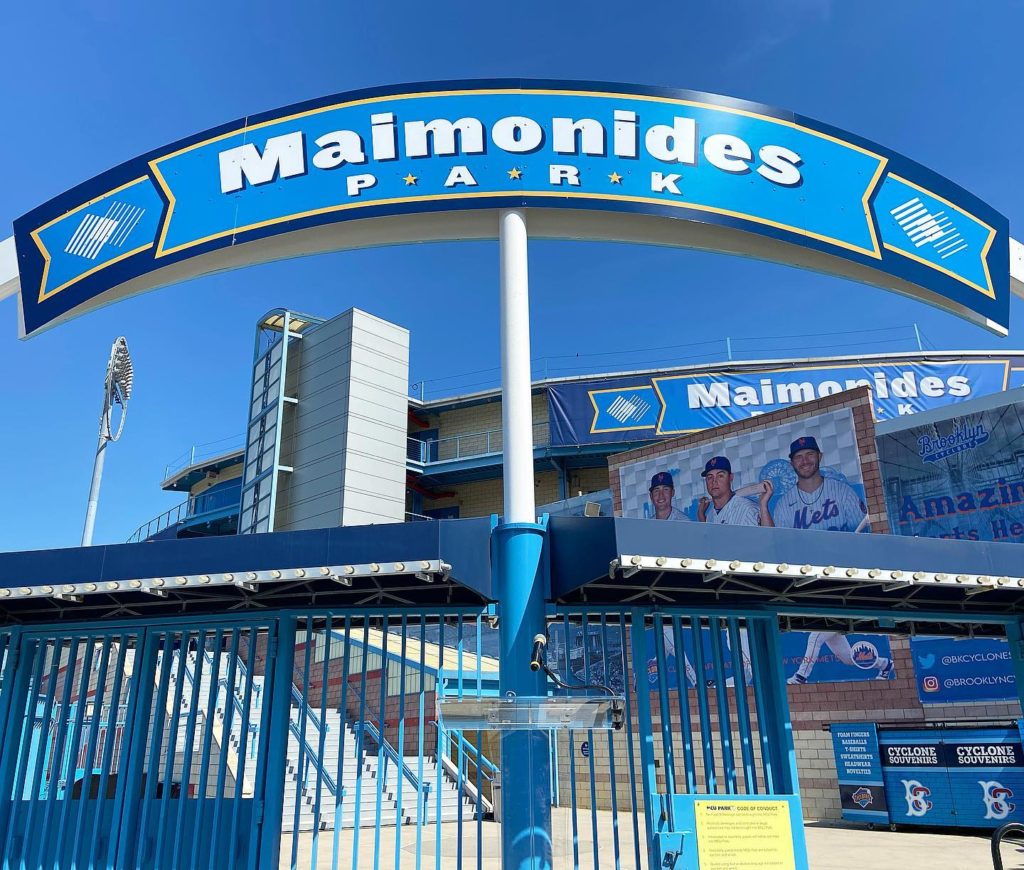 The Brooklyn Cyclones are not only in a new league, their field also has a new name.

It was revealed on May 18, during the team’s home opener and first game since the COVID-19 pandemic, that the ballpark in Coney Island is now named Maimonides Park.

The new name, Maimonides Park, reflects a new naming rights agreement with Maimonides Medical Center, located in Borough Park. It also coincides with the team’s first season as a High-A affiliate of the New York Mets.

Since 2010, the park had been known as MCU Park, reflecting an 11-year naming-rights deal with the Municipal Credit Union. This year, MCU did not renew the deal, clearing the way for a new name.

According to the Cyclones organization, which said that the deal’s dollar amount is “not public information,” the name reflects a new partnership that unites two of the borough’s iconic institutions.

Cyclones Vice President Steven Cohen told the Eagle that the opener marked over 600 days since baseball had been last played in Coney Island, due to the pandemic.

For this reason, Cohen said, “It’s profoundly fitting we will also be celebrating our new partner, an organization of heroes that not only helped lead our community through this pandemic, but also one fundamentally committed to the well-being of Brooklyn residents.”

“The agreement with MCU expired in 2020,” said Billy Harner, director of communications for the Cyclones. “So with us moving to full season and moving up in classification, it was a great opportunity to have a fresh start with Maimonides as we begin the next chapter in Cyclones history.”

The park was first named KeySpan Park in 2001. The deal that gave rise to that name expired in 2009, after KeySpan ceased to exist as a corporate entity. That company, itself a successor to Brooklyn Union Gas, was absorbed by National Grid.

The naming rights agreement between the Cyclones and Maimonides Medical Center is designed to span 10 years, meaning it will last through the end of the 2031 season.

Ken Gibbs, president and CEO of Maimonides Medical Center, was excited about the name change.

“Maimonides is extremely proud to extend our name, reputation and commitment to health to a Brooklyn landmark that provides family-friendly entertainment to thousands of residents each summer,” he said. “We are also grateful to the donors who help make this partnership possible, enabling us to raise awareness of the world-class services available here in Brooklyn and to provide information and programs that will help Brooklynites lead healthier lives.”

The hospital is celebrating its 110th year of service to Brooklyn.