The price of filling a prescription: Independent pharmacies fight for survival

Nine in 10 independent pharmacy owners in Brooklyn are facing potential cuts to staff and hours this year. The reason? Third-party pharmacy benefit managers. 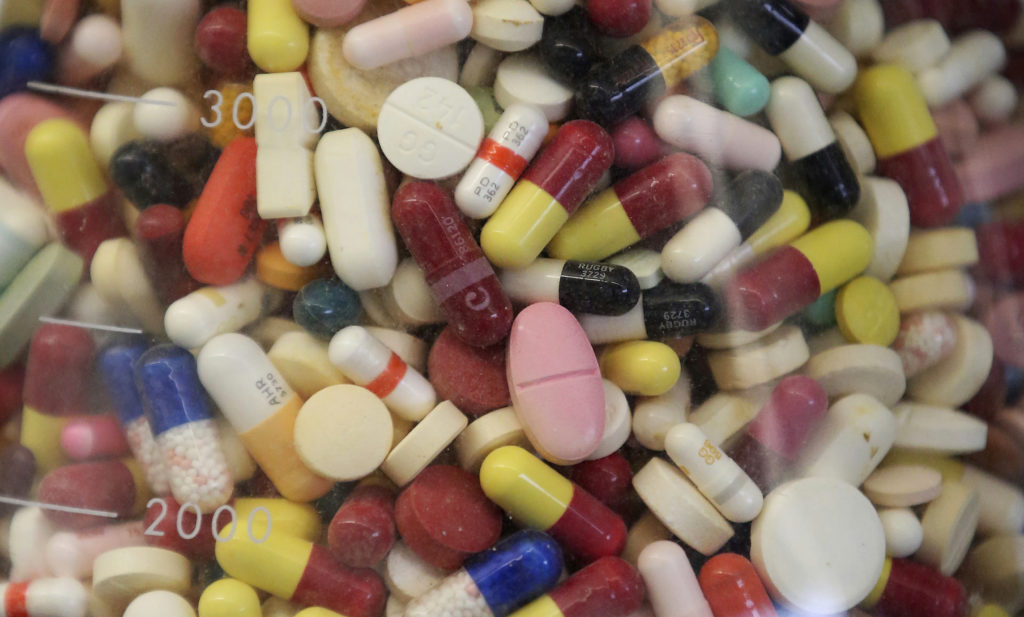 Pharmacy owners across the state say the source of their pain is clear: pharmacy benefit managers who have been pushing drug reimbursements down to unsustainable levels. AP Photo/Rick Bowmer, File
Share this:

Revenue at Bridge Pharmacy in Bay Ridge, open since 1998, is down 10 percent the past year, co-owner Stephen Cilento said. He and his partner have already laid off one pharmacy technician, and Cilento worries that if things don’t improve, he may have to shed another position or close the store an hour earlier each day.

Krishna Inapuri, co-owner of Vanderveer Pharmacy in East Flatbush, has already laid off two workers, a technician and a cashier. In January, he began closing the store an additional day each week. Inapuri disclosed that his partner has also cut his own salary.

More than 90 percent of independent pharmacy owners in Brooklyn said they are considering similar slashes to operating hours and jobs in 2019, according to a survey of members of an industry trade group.

Both pharmacy owners — and hundreds more across the state — say the source of their pain is clear: pharmacy benefit managers who have been pushing drug reimbursements down to unsustainable levels.

“Independent pharmacies, for the past two years, have been railroaded by the pharmacy benefit managers,” Inapuri said. “They have no transparency, and there is no reason told to us as to why the reimbursements are cut down in some cases on a daily basis, with no prior warning.”

The pharmacists say that if their existence is threatened, so are options for consumers, in terms of preferred service as well as drug availability.

Little-known by consumers, pharmacy benefit managers — or “PBMs” — are third-party administrators hired by insurance companies, government health programs and other bodies to negotiate drug prices with manufacturers on their behalf. PBMs’ impact on the prescription drug business is multifaceted, but in dealings with pharmacy owners they ultimately control the cost of a prescription filled. The PBM issues reimbursements for drugs purchased by the pharmacy ahead of time — reimbursements pharmacy owners say have shrunk dramatically.

“Oftentimes we are paid less than what we pay for the drugs, or at the same cost,” said Roger Paganelli, co-owner of Mt. Carmel Pharmacy in the Bronx and a spokesperson for FixRx, a statewide advocacy group comprised of 3,000 pharmacists, many of them independent pharmacy owners. “In some cases we make money, which is why we have a viable business, but we’re seeing a trend over the last couple of years where it’s just getting worse and worse.”

FixRx, which is fighting for regulations of PBMs, recently surveyed more than 500 of its pharmacy-owner members across the state. Nearly three-quarters of them reported that they were forced to reduce store hours or lay off employees in 2018, and 92 percent said they are considering doing so this year. The survey also found that “99 percent of them are concerned about the abusive PBM practices that jeopardize their businesses,” Paganelli said.

“All of the big insurance companies now, don’t deal directly with [independent] pharmacies, or us little guys,” said Cilento, of Bridge Pharmacy. “They hire companies that are like middlemen, the PBMs … that decide what we get paid. … We have no input in that. I don’t know of any other business that’s run that way.”

Between one-quarter and one-third of prescriptions filled at Bridge Pharmacy, Cilento said, are reimbursed by PBMs at less than the initial, wholesale-purchase price.

“Over the last year it’s really, really intensified,” Cilento continued. “There are these hidden fees that they take out on the back end that you don’t even know what they’re for. So you think you have a prescription where you have, let’s say, gotten paid a little more than you’ve paid for the drug, and when you do your paperwork later on, when the reimbursement comes in, you see that [you’re] reimbursed below what [you] pay.”

What is equally, if not more disturbing to Inapuri about the power of PBMs is that they provide the drugs to pharmacies with only the most positive impact on their own bottom lines—consequently compiling the list of drugs, known as a “formulary,” from which customers can obtain through their insurance plan or an outright purchase.

“The only way a doctor changes a medication is if the side effects are not tolerable or the [desired] results are not achieved,” Inapuri explained. “Let’s say a patient has been on a certain kind of insulin that’s been working for her the whole year, and come January that’s off the formulary, because that’s when the new contracts are agreed upon between the manufacturers and the PBMs.”

In such a situation, the pharmacist would have to call the patient’s doctor, who may or may not change the prescription. If they do, they risk the patient suffering from new side effects, or the drug not providing equal quality of treatment.

“My question is, always, ‘Where is the patient care in this whole scheme of things?’ There is none,” Inapuri said.

The Brooklyn Eagle reached out to the three PBM companies — Express Scripts, CVS Health and OptumRx, which collectively service 72 percent of the prescription drug market — for comment. Express Scripts and CVS Health did not respond, and a representative from OptumRx directed us to the Pharmaceutical Care Management Association, the PBM trade association.

A representative from the PCMA wrote in an email: “PBMs’ core mission is to advocate on behalf of consumers to keep prescription drugs accessible and affordable. While drugmakers alone have the power to set and raise prices, PBMs reduce prescription drug costs while also fairly compensating pharmacies for services they provide. In addition, most drugstores hire powerful Pharmacy Service Administrative Organizations (PSAOs) to collectively bargain on their behalf with PBMs and other payers. The contract provisions that PSAOs negotiate include reimbursement rates, payment terms, and audits of pharmacies.”

In an email response to the PCMA statement, Paganelli wrote: “When it comes to contracts between PBMs and neighborhood pharmacies, PBMs have all the leverage. Plain and simple. PBMs have demonstrated they’ll go to any length to blame anyone but themselves for our broken prescription drug distribution system.”

In citing data provided by Quest Analytics, the PCMA representative added: “From 2010 to 2018, the number of independently owned pharmacies [in New York State] increased from 2,185 to 2,813.”

But Paganelli, Cilento and Inapuri all said the harmful PBM reimbursement skimping is a phenomenon that only began the past year or two.

Inapuri speculates that CVS Health’s purchase of Aetna, the large health insurance company, was what got the ball rolling.

“They need the money, that’s my take,” he said. Inapuri observed that the deal was announced in December 2017, and in the run-up to its being finalized last November, drug reimbursements began to plummet, with the other PBM companies following CVS Health’s suit.

Even national retail chain pharmacies are lashing out at PBMs.

Shortly after the CVS Health/Aetna merger, Walmart announced it would no longer accept prescription drug coverage from CVS Health. However shortly thereafter, the two companies struck a new terms agreement.

“While such contract disputes are common, this one involved two giant companies at a time drug prices are rising and the PBM’s role has been called into question by employers, consumers, Congress and the Trump White House,” Forbes wrote after the refurbished pact was announced.

A neighborhood pharmacy doesn’t generally have the means of a Walmart to mount legal, public warfare on a PBM corporation, but the legislative tide might be turning in their favor. Part of Gov. Andrew Cuomo’s 2019 budget included new regulations of PBMs, after a study by the Pharmacists Society of the State of New York indicated the state was overcharged on Medicaid managed care prescription drug claims by PBMs to the tune of nearly $300 million.

The PBM problem runs nationwide, too.

Last month, U.S. Rep. Jerry Nadler, whose district includes parts of Brooklyn, introduced the Prescription Pricing for the People Act of 2019, which “would require the Federal Trade Commission to conduct a comprehensive report on the state of competition in the drug supply chain. In particular, this study would focus on whether pharmacy benefit managers, or PBMs, have engaged in certain behavior for anti-competitive purposes, such as steering patients to pharmacies in which a PBM has an ownership interest, giving such pharmacies more favorable rates than it offers to competing pharmacies, or using its market power to depress the use of lower-cost prescription drugs.”

If Nadler’s legislation is enacted and PBMs become more highly regulated, it will matter even less to neighborhood pharmacy owners if “there’s a Duane Reade on every corner,” as many New Yorkers say in mocking the overt presence of chain retail in the city. (More than 300 national chain pharmacy locations are spread throughout the city.)

“When it comes to service, that’s what the independent pharmacists pride themselves upon,” Inapuri said. “We are next to none. We know our customers, they like our service, that’s the reason they come to us. If [we’re] on the same playing field, we can take on any chain, any day.”

Inapuri then noted it was only a month ago that CVS announced they’re launching a same-day, prescription drug delivery service.

“Independent pharmacies have been doing that for a hundred years,” Inapuri said.

He then mimicked a mic drop.

Michael Stahl is a freelance writer and editor. A former high school English teacher, he has written for Rolling Stone, Vice, The Village Voice, Narratively, Splitsider, Outside Magazine and other publications.