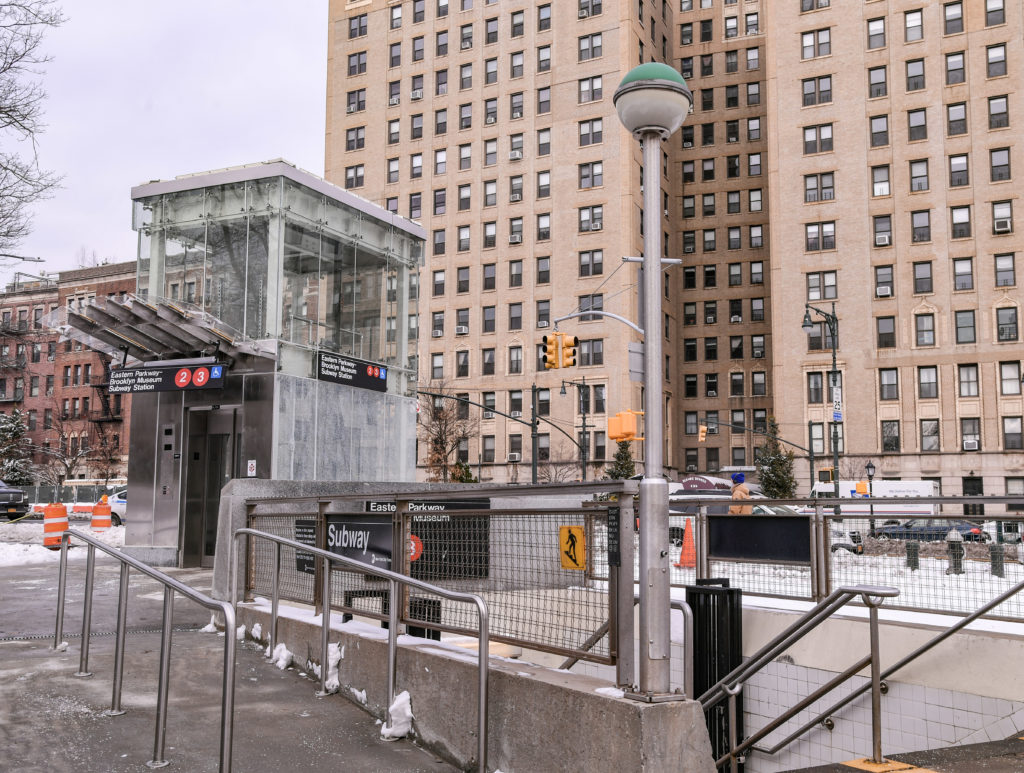 A new ADA-compliant elevator and a widened staircase will take commuters to the MTA’s Eastern Parkway-Brooklyn Museum subway station. The stately 1920s buildings of Eastern Parkway can be seen across the street. Marc A. Hermann / MTA New York City Transit
Share this:

That situation, however, was remedied on Friday as elected officials, representatives of those cultural institutions and community residents gathered on Friday to announce the completion of new accessibility features, including three new hydraulic ADA elevators, at the station.

The project, which was completed within budget, achieves full ADA compliance and improves access for straphangers. The ADA improvements include a street-to-mezzanine elevator on the Brooklyn Museum side of the station, along with two more elevators from the mezzanine to both the Brooklyn and Manhattan-bound subway platforms.

“We are elated to have a new accessible station on the doorstep of Brooklyn Botanic Garden. All New Yorkers and visitors should be able to access the Garden, Brooklyn Museum, Prospect Park and the other cultural, commercial, and residential amenities this neighborhood offers, and ADA-compliant public transit options are fundamental to ensuring that access,” said Brooklyn Botanic Garden President Adrian Benepe.

In addition to the three new elevators, other improvements completed as part of the project include:

“Over the past several months we have been able to complete 10 accessible station projects including this one, even with the challenges presented by the COVID-19 pandemic, demonstrating that we can deliver work that makes a difference for our customers,” said Janno Lieber, president of MTA Construction & Development. “Out-of-the-box thinking is enabling MTA C&D to deliver projects better, faster and cheaper.”

“I am pleased to see the MTA’s continued commitment to accessibility with yet another station unveiling — the second in Brooklyn in a week,” said Victor Calise, MTA board member and commissioner of the New York City Mayor’s Office for People with Disabilities. “Elevators and other accessibility improvements benefit everyone.”

Brooklyn Borough President Eric Adams said: “There is no reason you should have to map out your life based on you utilizing public transportation to get to and from our cultural institutions, visiting your loved ones and your neighbors. This is a crucial step forward, but is only the first of many steps. And again, congratulations to the great advocates, community leaders and all who came together to make this happen.”