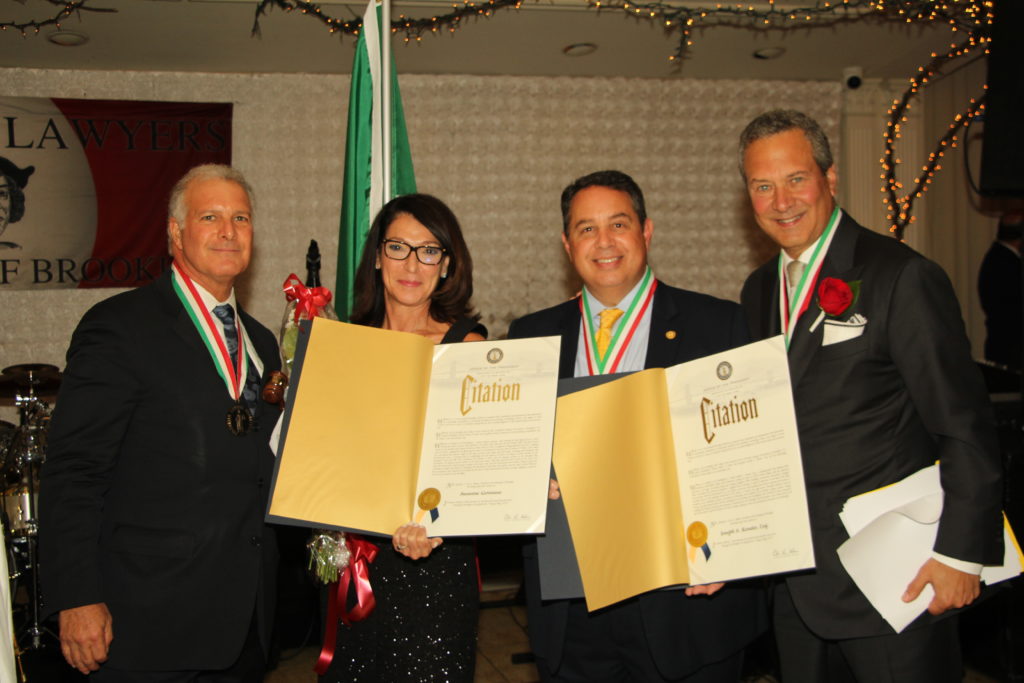 The Columbian Lawyers Association said goodbye to outgoing president Joseph Rosato (second from right) and installed Susanne Gennusa as its new president during the annual dinner that was held at El Caribe. Also pictured are Gregory Cerchione (left) and Steven Bamundo (right). Eagle photos by Mario Belluomo
Share this:

The Columbian Lawyers Association of Brooklyn honored outgoing President Joseph Rosato and installed its new slate of officers and directors during the group’s annual dinner on Friday, which was held at El Caribe in Mill Basin.

“It’s been an honor and privilege to be the president of this organization,” Rosato said.

Susanne Gennusa was installed as president of the association by Hon. Carl Landicino, a past president. Other officers installed included Christopher Caputo, Maria Aragona and Salvatore Scibetta as vice presidents; Mark Longo as treasurer and Yolanda Guadagnoli as corresponding secretary. In addition, John Dalli was added to the slate as the organization’s recording secretary.

Three members joined the board of directors including Robert Soos, Charles Siegel and Mario Romano.

Steven Bamundo, chairperson of the executive committee, served as master of ceremonies of the event. He introduced Rosato and then the officers and board members who were installed. He also explained the significance of Rosato’s presidency.

“Linda LoCascio was our last president hand-picked by the late Judge Anthony Cutrona, the heart and soul of our organization, but Joe Rosato represents another important landmark in our history because he was the first picked by our executive committee,” Bamundo said. “The judge left no stone unturned in preparing for the future of this organization so he picked a group of past presidents he felt would be representative of the association.”

Rosato was the first picked by the executive committee that Justice Cutrona put together and Bamundo said that the decision to pick Rosato was unanimous.

“They needed someone proud of their Italian heritage, respected by the bar and bench alike in the legal profession, and who had proven leadership skills,” Bamundo said. “That person was Joseph S. Rosato. I don’t mind patting the committee on the back for this choice because he made us look brilliant.”

Before he officially stepped down as president, Rosato gave a brief speech in which he thanked Bamundo; the executive committee; Lucy DiSalvo, the executive director; and also Gregory Cerchione, whom he credited with getting him more involved.

Rosato then offered advice to Gennusa.

“Trust the people around you, trust the executive board — they have been doing it for a long time — and above all trust Lucy,” Rosato said.

After the installation was completed, Gennusa was officially introduced by Lawrence Moringiello before she addressed the more than 300 members in attendance.

“I’m mindful that I have big shoes to fill not only in following Joe, who did an amazing job, but the long line of outstanding presidents that have served over the years,” Gennusa said. “Judge Cutrona created a family whose members extend to each other warmth and respect. I cannot tell you the level of support I have already received from past presidents, fellow officers, board members and judges.

“I thank all of you for making this organization what it is and continuing to show up and joining us at all of our events.”