Adams and Cornegy Charge Homes in Gentrifying Neighborhoods Are Being Stolen 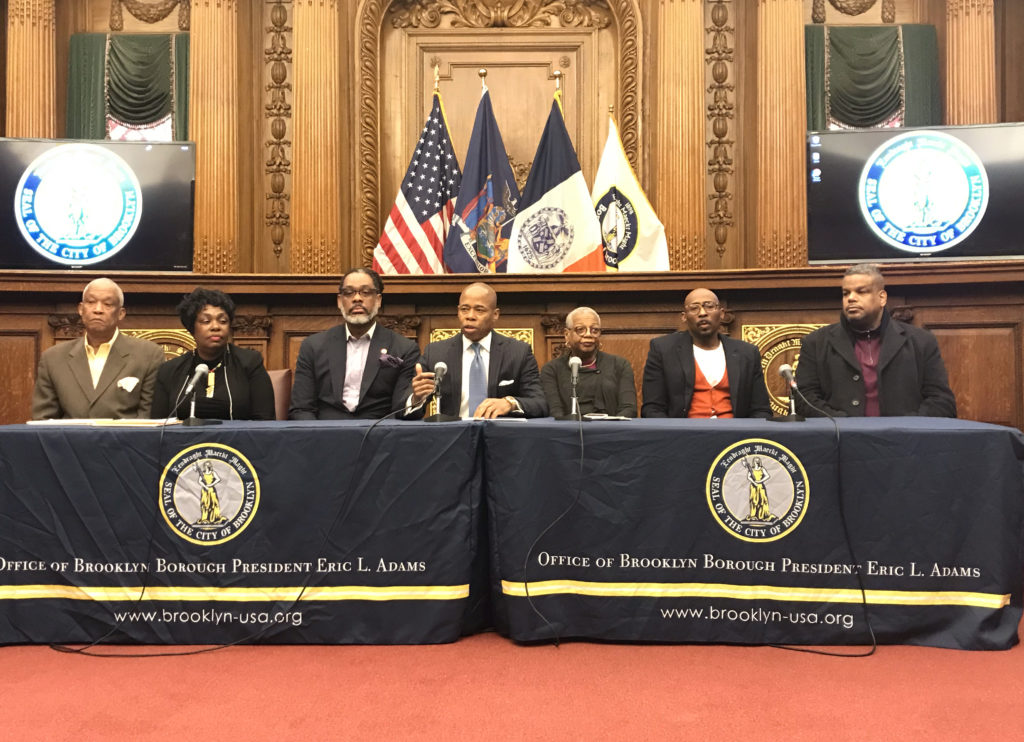 Marlene Saunders, a nurse who owns 27 Dean St., was talking to her adult son in the kitchen when they heard a noise out front. They found a piece of paper had been taped to the door. It told her tenants to pay their rent to the city from now on, not her.

Her son checked with the city and found she owed no taxes. He paid her water bill of just over $1,000 — which was not yet due — before he took off on a trip to Dubai. It took the city more than 21 days to post the payment to her account.

“I toiled three jobs to pay for that house. I don’t want anybody to think they can just come and take my property,” she said. But her house is still out of her possession and there’s no sign that she will get it back.

When McConnell Dorce went to HPD to pay $30,000 in taxes, they gave him the run-around, he said.

A woman named Fisher told him, ‘Okay, you come back next week,’” he said. “Next week I come back, she said, ‘Wait. Wait May. Wait June, wait July, wait end of August.’”

Finally a friend took Dorce to a free lawyer. “When they punched my name up, they said, ‘Your house has been foreclosed.’

“I was told that I was foreclosed due to violations that I was not even made aware of. It was not clear what I violated to designate my property as distressed,” he said.

After hearing heartbreaking stories from constituents who lost their million dollar homes over technicalities — a late water bill payment or a mistakenly checked box on a form — or unauthorized name changes on deeds, the officials called for a “full-scale forensic audit and investigation on the federal, state and city levels.”

The BP says his office is witnessing “serious red flags with HPD’s TPT program.” HPD’s Third Party Transfer (TPT) Program designate sponsors to purchase and rehabilitate distressed vacant and occupied multi-family properties. HTP says it does this “in order to improve and preserve housing affordable to low- to moderate-income households.”

In letters they sent last week to United States Attorney for the Eastern District Richard P. Donoghue, U.S. Attorney for the Southern District  Geoffrey Berman, NYS Attorney General Barbara Underwood, Brooklyn D.A. Eric Gonzalez and Public Advocate Letitia James, Adams and Cornegy asked for their partnership with the City Council to enact a temporary moratorium on TPT seizures and other foreclosures in Brooklyn to ensure that no illegal activity is occurring.

“We’re not talking about a lot or a particular location,” BP Adams said. “We’re talking about the transfer of wealth in traditional communities of color. When you take away a home from an African American or person of color, you’re taking away their largest asset and you remove their ability to hand down that asset to their children. Their long, hard labor to build that wealth is instantly removed.

Properties in the program are subject to an in rem foreclosure. The city says properties can become subject to this type of foreclosure if property taxes and other property-related charges are late for an extended period of time, and if the property is in an area the city considers to be “blighted and has been targeted for improvements.”

“For the city to take the position that at least the home owner is able to live inside an occupied space while they’re alive makes no sense because the wealth that’s associated with that family disappears,” Adams said. He pointed out that there are homes worth more than a million dollars being foreclosed for owing $3,000 in taxes.

Adams said the Borough President’s Office “does not have the bandwidth” to get the investigation that is needed. “We need the federal government to come in, utilize their subpoena power, and subpoena every agency that is involved in the removal of property of black and brown people in this city. This problem we believe is larger in scope than you can imagine. We thought the foreclosure crisis was behind us. In reality, it is not behind many people from the black and brown community.”

On Monday, Brooklyn District Attorney Eric Gonzalez said in a statement, “I am committed to protecting all Brooklyn homeowners, especially long-term residents who have been the backbone of the community for decades. These folks, many of whom are now seniors, have seen their property values skyrocket over the last decade as Brooklyn soars in popularity. My Office has an active Real Estate Fraud Unit that aggressively prosecutes deed theft and other real estate crimes.” (See below for his full statement and advice on what to do if you suspect you may be a victim of fraud.)

A ‘Commodities Market’ at 360 Adams

Dorce’s attorney Yolande Nicholson said the investigation should include “how the Office of Court Administration is “quietly and surreptitiously restructuring policy to expedite foreclosures of all types. It’s a commodities market every Thursday at 360 Adams St. What’s being stolen is equity.” Just a “handful of judges” oversee these foreclosure cases she added.

In Dorce’s case, no one at HPD told him of the property transfer under TPT, and the city’s Department of Finance “systematically reduced the value of his home. It’s unclear which violation they used to say his property was distressed.” Nicholson said that Dorce received a message from the city that he had no violations. But on Sept. 4 there was a “slew of violations,” none of them Class C. “It’s curiously systematic,” she said.

In another case, homeowner Van Walker told reporters, “My house was not only taken from me, but I’m also about to be taken into custody by the New York City Sheriff’s Office. They came to my house on August 2nd, threw me out — as well as my five-year-old daughter and 20-year-old son — and told us to pack up and leave the house under the threat they would incarcerate me. This was an order from the [Kings County] Supreme Court foreclosure division. I refused to sign my deed in lieu of foreclosure, so I was held in contempt of court and sentenced to jail time. The deed, bills, and taxes are still under my name.”

Home owner Ralph Parker (his brother is Derek Parker, aka the “Hip Hop Cop) said that while it was cheap and easy for criminals to get control of owners’ property, it takes thousands of dollars in legal work for the owners to fight to get it back.

“People know the system and create fictitious names and that’s how they get defrauded. Even if the fraudster is found, the homeowner still needs a lawyer to file papers and get the property back in their name,” Parker said.

The sheriff’s office is understaffed and not able to handle all the real estate fraud cases, he told the Brooklyn Eagle.

“It is not fair that criminals can do this, and we the victims must pay thousands of dollars to rectify it with nobody being punished,” he said.

A “foreclosure rescue scam” has been rampant in Brooklyn over the decade, according to the state Attorney General’s Office. As of February 2016, the New York City Department of Finance had 525 open investigations of mortgage rescue scams involving 671 properties across the five boroughs, mostly in Queens and Brooklyn.

In November 2017, the AG indicted Marilyn Sanchez, 49, for allegedly filing two fraudulent deeds and supporting documents with the New York City Register’s Office in order to fraudulently acquire ownership of two separate residential homes in Brownsville and East Flatbush. In both instances, the owners never signed the deed nor the supporting documents and they never gave Sanchez or anyone else permission to sign on their behalf, according to the AG’s Office.

Brooklyn DA Gonzalez announced in November that a former New York City police officer, Blanche O’Neal, 49, was sentenced to six months in jail and five years’ probation for transferring the title from a neglected three-family house in Bedford-Stuyvesant to herself. The defendant filed a deed transferring the property from the deceased owner’s nephew to herself in 2012. She was caught when the nephew was approached by an actual potential buyer in 2014.

On Monday, DA Gonzalez said, “I am committed to protecting all Brooklyn homeowners, especially long-term residents who have been the backbone of the community for decades. These folks, many of whom are now seniors, have seen their property values skyrocket over the last decade as Brooklyn soars in popularity.

My Office has an active Real Estate Fraud Unit that aggressively prosecutes deed theft and other real estate crimes. In recent years, we have had cases involving identity theft, where imposters sell other people’s houses, as well as other schemes. Susceptible properties include abandoned houses as well as family homes with deeds in the name of relatives who have passed. We have seen cases where scammers have transferred or attempted to transfer properties into their own names, forging the property owner’s name and then selling or attempting to sell the property.

Anyone who suspects they may have been a victim of a real estate fraud should call the KCDA Action Center at 718-250-2340. I also urge every homeowner to register with the Automated City Register Information System (ACRIS) so that they are alerted when documents such as a deed, deed-related, mortgage or mortgage-related document are recorded or changed on their property. Do this by visiting www.nyc.gov/finance or the ACRIS website, www.nyc.gov/acris and click on the “Recorded Document Notification” link. Finally, even without email alerts, owners should be diligent about tracking routine mailings (tax bills, utility bills, etc.). If any of these stop coming, the owner should check with the City and with the utility companies to find out why.”