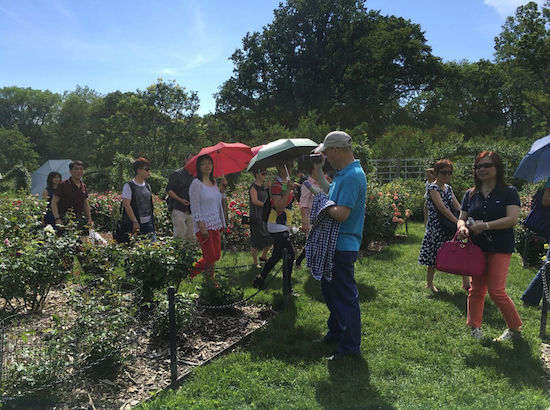 It’s prime time for these posies.

Brooklyn Botanic Garden’s roses are ready for their closeup.

Cherry blossoms may be the beloved horticultural institution’s most famous visitor attraction, but their brief season has come and gone for this year.

It’s the Cranford Rose Garden’s turn to enjoy the spotlight. Today it is one of the largest rose collections in North America, with more than 1,000 kinds of roses. Some of them have survived since the garden was originally planted. How’s that for longevity?

That which we call a rose by any other name would smell as sweet. (Remember that fine line from “Romeo and Juliet”?) At Brooklyn Botanic Garden, some of the roses have enchanting names like Queen of Hearts. Others are named for movie and television stars such as Betty White and Henry Fonda.

The perfumed air is filled with birdsong.

Besides beach-bumming, backyard barbecues and boating, a visit to the botanic garden’s roses was a Memorial Day weekend activity for many Brooklynites — and tourists, too.

They soaked up the sunshine, snapped selfies and rolled strollers along pathways overhung with trellises.