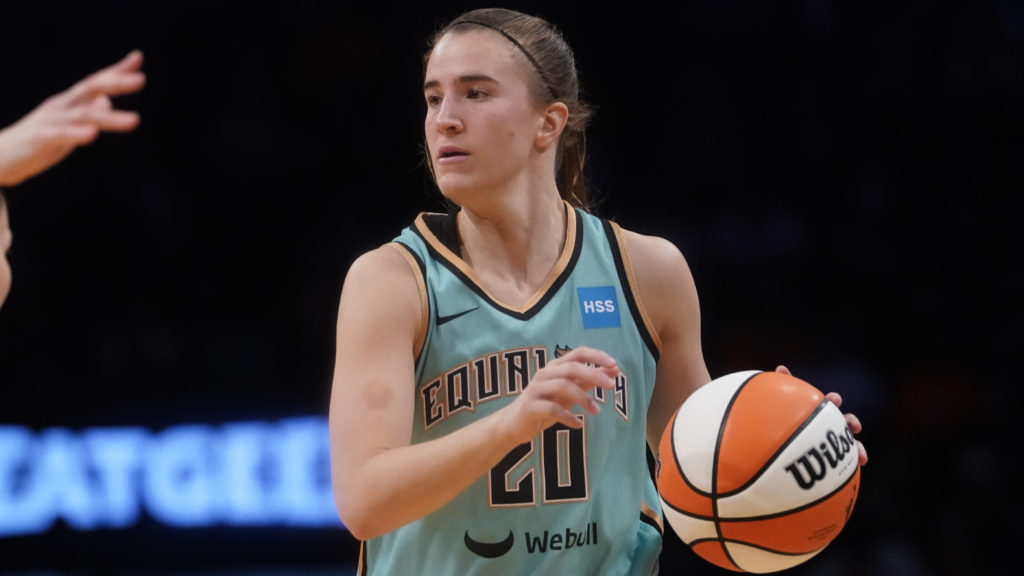 Sabrina Ionescu has high hopes for the New York Liberty and their pursuit of a playoff spot.

If it weren’t for Ionescu’s late-game heroics in Brooklyn last weekend, the Liberty (10-17) might be even further removed from serious playoff contention.

Entering Friday night’s rematch with the league-leading Sky (21-7) in Chicago, the Liberty sit 1 1/2 games behind Atlanta and Phoenix for the eighth and final postseason berth.

They appeared to be on the verge of a sixth consecutive loss Saturday when Ionescu took matters into her own hands in front of the 6,926 gathered on the corner of Atlantic and Flatbush.

With her team down 80-78 in the closing seconds of regulation, Ionescu drove past Rebekah Gardner and converted a tying layup.

Gardner fouled Ionescu on the way up and the reigning Eastern Conference Player of the Month made the free throw to put New York ahead to stay, 81-80.

“Well they were forcing me right, so I just went right,” she revealed. “But hats off to my teammates. They got me open and believed in me in crunch time. Really happy to have made that shot.”

Ionescu, who finished with 17 points, eight rebounds and nine assists, knew the Liberty needed to finish strong to beat the Sky and bolster their hopes of reaching the playoffs for a second straight season.

“That’s a big win for us to snap a five-game losing streak,” Ionescu said. “Sometimes seeing a win is all you need to get a spark and win a game. We have a lot more games left.”

New York has nine regular-season contests remaining to make a bid for one of the final few spots.

Ionescu thinks Saturday’s dramatic victory may be what she and her teammates needed to recapture the magic that led to a 7-3 spurt following a season-high seven-game slide in May.

“It started tonight and we’re gonna continue to chip away and hopefully continue to get some wins,” she added.

Candace Parker amassed 21 points and 11 boards for the Sky, who had their six-game winning streak snapped in Brooklyn.

Parker also missed a potential tying shot in the paint with two seconds remaining that may have forced overtime.

“That’s the play we wanted,” Chicago coach James Wade said of Parker’s attempt. “Nine times out of 10 she makes it.”

The one time she didn’t may have kept the Liberty in the thick of the playoff race down the stretch.

But first, they have to find a way to beat Parker and the Sky again Friday.

“We’ll continue to get better and not stress about what seed we are,” Ionescu said.

GIVE ME LIBERTY: Following Thursday’s visit to the Windy City, the Liberty can load up on home cooking as they host Phoenix and Los Angeles twice from July 31 to Aug. 3. … The Sky and the Las Vegas Aces are the only two WNBA teams to have nailed down a playoff spot thus far. …. The Liberty won Saturday despite committing 18 turnovers and forcing only eight from Chicago.