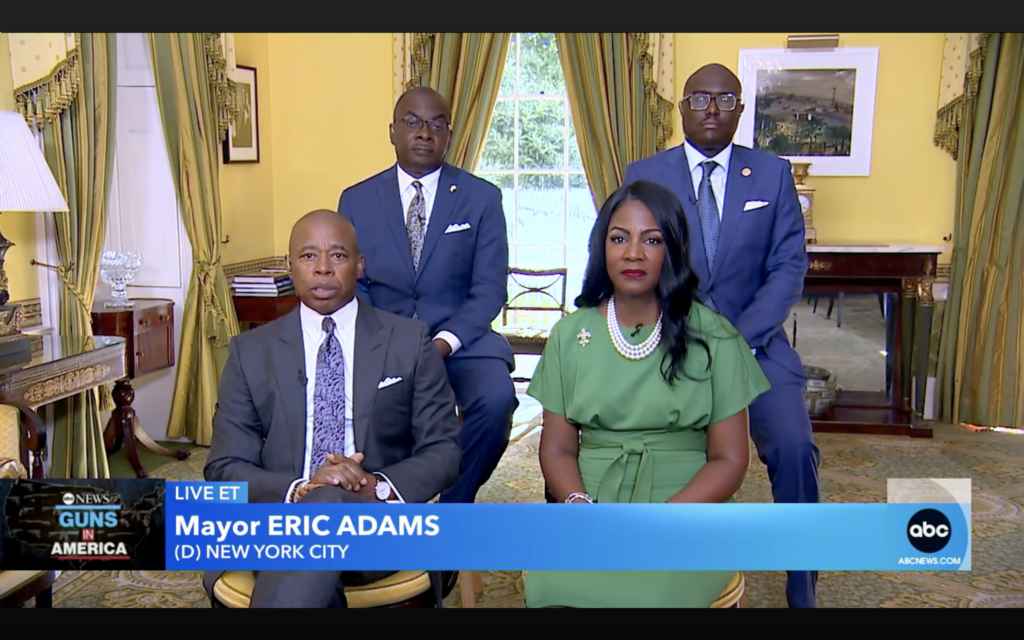 Mayor Eric Adams, in a conversation with George Stephanopoulos on ABC’s “Good Morning America,” discussed the municipal government’s role in curbing gun violence with Buffalo, NY, mayor Byron Brown, as well as St. Louis, MO, mayor Tishaura Jones and Little Rock, AK, mayor Frank Scott, Jr. The mayors emphasized that gun violence kills over 110 people per day and over double that amount of individuals are injured. In turn, it is the $9 billion industrialization of that violence and the “over-proliferation” of guns from which manufacturers profit – they “are turning pain into our communities,” as Mayor Adams told Stephanopoulos.

“So we want to mobilize, strategize, learn from each other and see best practices,” said Mayor Adams.

The rest of the interview is as follows:

George Stephanopoulos: Now to our GMA cover story on guns in America. Big city mayors from around the country are gathering today at Gracie Mansion here in New York for a summit on preventing gun violence. Joining us are New York Mayor Eric Adams, Buffalo Mayor Byron Brown, St. Louis Mayor Tishaura Jones and Little Rock Mayor Frank Scott, Jr. Thank you all for joining us this morning. Mayor Adams, let’s start with you. You’ve got 15 mayors coming together all in. What do you all hope to accomplish?

Mayor Eric Adams: Well, we have clearly identified that we’re dealing with the same problem, a $9 billion industry that their profits are turning pain into our communities. So we want to mobilize, strategize, learn from each other and see best practices. We were successful in decreasing shootings and homicides in the city, but we have a long way to go and the goal is to use a centralized database to show where guns are coming from, who are the manufacturers.

Mayor Adams: Five manufacturers in this country are producing over 50% of the guns that are used in crimes. We must learn from each other. United as mayors we can send a strong message on a national level and a state level that we have to stop this senseless over proliferation of guns.

Mayor Tishaura Jones: Well, if this were any other industry that was as deadly, then the government would’ve already acted to make sure that we got rid of whatever was killing our citizens. And we haven’t seen that sort of action from the federal government. So we have to look at the root causes and look at other strategies to try to cure gun violence in our communities.

Stephanopoulos: Mayor Brown, the day after the horrific massacre back in Buffalo where 10 Black people were killed at that shopping center, you said you believed it was a turning point in this debate. Do you still believe that?

Mayor Byron Brown: As we continue to heal and recover from the white supremacist mass shooting in Buffalo on May 14th, I do believe that it was a turning point. I’ve been talking to mayors all across the country, Republicans as well as Democrats who want to do something about the over proliferation of guns in our country that are taking innocent American lives. Over 110 people are killed by guns every day in our country and more than double that injured. Something has to be done about guns and sensible gun reform.

Stephanopoulos: But Mayor Scott in Arkansas, in your state, it seems like any kind of legislation would be a non-starter in a red state like Arkansas. What can you hope to accomplish there in your community?

Mayor Frank Scott Jr.: While violent crime is decreasing in the city of Little Rock, we understand that we have to bring attention as we address gun violence as an epidemic in our communities. Any of us at any point in time will receive a phone call about a homicide and 99.9% of the time it relates to a gun, and many times someone who has illegally accessed the gun or has illegally sold the gun. And What we have to do is continue as united as mayors what we do to continue to ensure that we have low violence, low crime, but we have to address the guns. Anytime that you have the ability to have a gun in a church or in a park, we can’t find this cold comfort when it happens at our doorstep.

Stephanopoulos: Especially when those guns are concealed. Finally, Mayor Adams, I think Mayor Jones did bring up importantly that the federal government has to act, but we know we’re seeing real paralysis. Have for a long time in Washington, despite the fact that they were finally able to pass some legislation last month. So on the state and city level, what kind of changes can you implement on your own? How do you do it?

Mayor Adams: Well, that’s part of the conversation today with these mayors. We not only must use the tools in our toolbox, we have to think outside the toolbox and we want to strategize together. We’ve shared the horrific actions of gun violence in our city, but it must be intervention and prevention. The prevention, we need more help from the federal government, but the intervention let’s use the tools we have.

Mayor Adams: ATF, let’s make sure we expand on the number of ATF agents. Let’s do information sharing. For the first time, this database that we’re going to use of where guns are coming from, we’re encouraging others to share this information and then let’s think differently. Let’s get that gun before it hits our streets. That is one of the most important things that we want to accomplish and ATF could be a real information sharing resource to accomplish that.

Stephanopoulos: Your work is critical. Thank you all very much.