May 9: ON THIS DAY IN HISTORY ON THIS DAY IN 1909, the Brooklyn Daily Eagle reported, “Fists, spikes, clubs, bottles and a few score other articles, including a baseball which hit the head of Knabe, second baseman on the Philadelphia nine, and then bounded in a graceful parabola in front of fifteen thousand people, were the weapons used in a riot which broke out in the fifth inning of the game between the Brooklyn and Philadelphia teams yesterday afternoon at Washington Park. The fight started from the spiking of Lennox, Brooklyn’s third baseman, by Knabe, who was put out at third as he came on a run to the bag. The crowd grew excited at the first sign of trouble, but when one of the men attached to the Philadelphia team ordered a special policeman to enter a box on the grandstand and arrest one of the men who were in it, in company with Peter Cleary, the popular president of the Brooklyn Letter Carriers Association, and William Kelly, the national president of the letter carriers, the crowd became frantic, and thousands of men left their seats and rushed on the field. That no one was seriously injured in the riot is considered extraordinary.”

ON THIS DAY IN 1936, the Eagle reported, “Brooklyn got up early this morning to wave a welcome to the mammoth Hindenburg. Thousands of persons, including some who had been out all night, were on rooftops and other vantage points when the mighty Zeppelin sailed into view at 5 a.m. Brooklyn was the first land the ship had passed over since leaving Ireland. After flying directly over the borough, the Hindenburg cruised for about 18 minutes over Manhattan, from the Battery to 110th St. Ship sirens were sounded enthusiastically and searchlights were played on the 803-foot craft. Many who had been sleeping were aroused by the din of the reception and rushed to windows and roofs to wave a welcome. Several hundred greeters were gathered on the roof of the Hotel St. George and traffic in front of the hotel was tied up temporarily when motorists stopped their cars to watch the huge airship.”

ON THIS DAY IN 1937, the Eagle reported, “CHURCHILL DOWNS, LOUISVILLE, KY., MAY 8 (AP) — War Admiral, son of Man o’ War and the favorite, raced to a smashing victory today in the 63rd Kentucky Derby before a crowd of 63,000. War Admiral led from start to finish, beating J.H. Louchheim’s Pompoon by two lengths and Mrs. Ethel V. Mars’ Reaping Reward by five lengths. Charley Kurtsinger, Louisville boy, who rode Twenty Grand to record-breaking triumph in the 1931 Derby, gained his second victory in the good time of 2:03 1-5 for the mile and a quarter. War Admiral, after behaving badly at the post, broke in front and never was headed. Kurtsinger hit the favorite only twice with the whip as they rounded the turn leading into the home stretch and beat off the only challenger, Pompoon. War Admiral paid $5.20 to win for each $2 Mutuel ticket, thus going to the post slightly short of 5 to 2 odds.”

ON THIS DAY IN 1963, the Eagle reported, “LANSING, MICH. (UPI) — Gov. George Romney returned to his state capital and promptly left the 1964 Republican presidential nomination battle up to Sen. Barry Goldwater and Gov. Nelson A. Rockefeller. Romney, home after an eight-day sojourn in Washington and N.Y., repeated that he is ‘not a candidate and I do not plan to be a candidate in 1964.’ The former industrialist said that Goldwater and Rockefeller are the ‘top candidates at this point’ and said he had invited both of them to come to Michigan ‘to let the state get a look at them.’ Romney said he was amazed at the publicity given his recent trip during which evidences of a Romney-for-President boom was growing within GOP ranks. ‘People have been interpreting things that aren’t there,’ he said. ‘All I’ve been doing is refraining from indicating what I’m going to do after this term as governor.’”

GOLDEN YEARS: Howard Carter was born on this day in 1874. The British archaeologist discovered the treasure-filled tomb of King Tutankhamun in Luxor, Egypt in November 1922. He worked on the excavation until 1932 and died in 1939.

CHANNEL ZERO: Television was derided as a “wasteland” on this day in 1961. Speaking before the bigwigs of network TV at the annual convention of the National Association of Broadcasters, new FCC chairman Newton Minow exhorted those executives to sit through an entire day of their own programming. He suggested that they “will observe a vast wasteland.” He also urged them to strive for “imagination in programming, not sterility; creativity, not imitation; experimentation, not conformity; excellence, not mediocrity.”

“If you tell kids they can’t have something, that’s what they want.”

— Rock and Roll Hall of Famer Billy Joel, who was born on this day in 1949 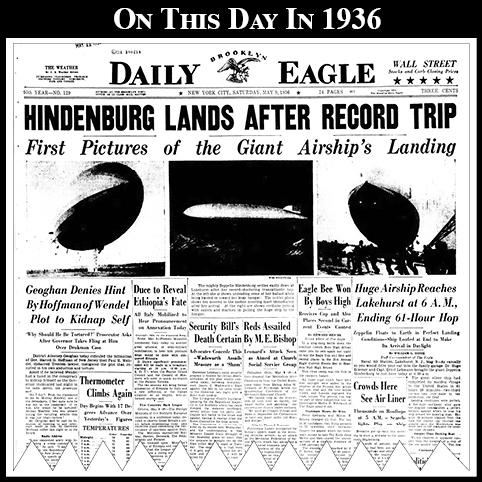