“The bird situation in Brooklyn Bridge Park is very good,” Heather Wolf, Brooklyn Bridge Park’s doyen of all things avian, said at the start of one of her celebrated birding walks on March 19. “Over 185 species have been sighted here, and I have seen 179 of these.”

The bird walks are sponsored by the Brooklyn Bridge Park Conservancy. Christina Tobitsch, the park’s education manager, and Haley McClanahan, lead environmental educator, handed out binoculars and field guides to anyone who wanted them.

Roughly 15 avid birders joined Wolf on Saturday’s ramble along the park’s pathways and meadows as she pointed out birds flitting, perching, soaring and swimming. Participants called out the birds they spotted, such as a Mourning Dove in the Dark Forest area. “Mourning Doves are starting to build nests right now,” Wolf said.

Wolf held a running conversation with the birders as the group traveled from Pier 1 to Pier 2. She explained how to identify distant birds by their silhouettes, the shape of their tails, and their distinct chirps, songs — or, in the case of Downy Woodpeckers, their drumming sound. When she spotted a bird carrying building material in its mouth, she told the birders to track it with their eyes. “When they take off flying, try to follow them. That’s how you’ll find the nests.”

Wolf, the author of Birding at the Bridge: In Search of Every Bird on the Brooklyn Waterfront, has been birding at Brooklyn Bridge Park since 2012. (Her book was a Staff Pick this past February in the “Brooklyn Books” category at Brooklyn Public Library.)

The park’s designer, Michael Van Valkenburgh, configured the 1.3 mile-long park and its variety of environments with birds in mind, Wolf said.

“Pier One used to be the main hot spot, but now so many new habitats have opened up throughout the park. The work that the gardening staff does here with the native prairie grasses and native shrubs, it’s just amazing,” she said. “Migrating Common Yellowthroat warblers even nested here last spring.”

The park is the year-round home to species such as Mockingbirds and Song Sparrows, while other varieties visit just during migration or breeding time, Wolf said.

Common Grackles are the first to arrive during migration, she said. “They’re here to build nests and breed. The Gray Catbird also will be arriving soon to nest. But there are a lot of birds that just pass through. There is the Eastern Phoebe, which is here right now —  it’s a flycatcher. It’s just going to pass through on its way to its nesting locations a little bit further out or further north.”

“Migration is going to peak in May, when we get a lot of these neotropical migrants passing through. It’s a stop to rest, seek shelter and eat – mainly eat. That’s what I like to do, too!” Wolf laughed.

“Heather’s bird walks are a fantastic way to learn more about the birds who call Brooklyn Bridge Park home,” Nancy Webster, executive director of Brooklyn Bridge Park Conservancy, told the Brooklyn Eagle. “An expert birder, she generously shares her tremendous knowledge and enthusiasm for birds and is a much loved cornerstone of the Conservancy’s environmental education programming.” (https://www.brooklynbridgepark.org/things-to-do/birding/)

Wolf’s blog, brooklynbridgebirds.com, documents the birds of Brooklyn Bridge Park. “I try to post photos every weekday of birds that are in the park right now,” she said. “It’s also on Instagram, Twitter, and Tumblr so any channel you are on you can see what’s in the park, so you know what to look for when you visit.”

Wolf is also a developer with https://ebird.org/explore, a citizen science project of the Cornell Lab of Ornithology and a great resource for finding birds and exploring bird hotspots. 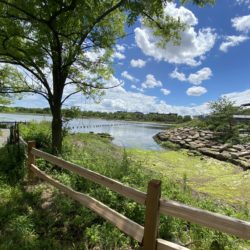