October 25: ON THIS DAY IN HISTORY ON THIS DAY IN 1941, the Eagle reported, “John F. Farley, a pressman, of 7 Pulaski St., today began his 51st year of employment on the Brooklyn Eagle. It was Oct. 24, 1891, that Mr. Farley started working for the newspaper as an office boy in the editorial department in the old Eagle building on lower Fulton St. In the next 15 years he worked in the editorial and business departments, then he became a pressman. He met his wife, Mrs. Kathryn Seaman Farley, whom he married 35 years ago, in the Eagle, where she was employed in the business office. His brother, Thomas, who started to work here on July 5, 1892, is less than a year behind him in total amount of service.”

ON THIS DAY IN 1945, the Eagle reported, “Sure, Tom Kelly was nervous when the president snapped the Congressional Medal of Honor around his neck, but being given an official hero’s welcome back to Brooklyn today was another thing. He actually cracked his face with a grin. The ceremony took place in Borough President [John] Cashmore’s office in the presence of Sergeant Kelly’s family from 219 Cooper St.; his local assemblyman, John R. Starkey, and representatives of the borough veterans’ organizations. When it was over, he found himself borough president of Brooklyn for the day, a precedent established when Mr. Cashmore welcomed home another Brooklyn hero, Sgt. Irving Strobing. But Sergeant Kelly, having finished one job with laurels, wasn’t so quick to take on another. ‘I am greatly honored,’ he told the borough president quickly. ‘And since, when you’re president, I understand you can do as you please, I’ll just take the day off.’ Which he did forthwith.”

ON THIS DAY IN 1962, the Eagle reported, “MOSCOW (U.P.I.) — Soviet Premier Nikita Khrushchev called today for a summit meeting to help settle the Cuban blockade crisis to prevent it from growing into a nuclear war. The official Soviet Tass news agency quoted him as saying in reply to a telegram from British philosopher and pacifist Lord Bertrand Russell that the Soviet Union ‘will make no rash decisions’ as a result of the Cuban crisis. But he also was quoted as saying that if the United States government ‘carries out its planned program of piratical action, then of course, we shall have to make use of the means of defense against the aggressor; we have no other way out.’ The Soviet premier said Moscow will ‘not let itself be provoked by the unjustified actions’ of the United States. He obviously referred to Washington’s decision to halt all further shipments of offensive arms to Cuba and its demand that present nuclear capable missile bases there be dismantled. ‘We will do everything which depends on us to prevent the launching of a war,’ Khrushchev said.”

STROKES OF GENIUS: Pablo Picasso was born on this day in 1881. Called by many the greatest artist of the 20th century, the Spanish painter, sculptor and engraver is said to have commented once: “I am only a public entertainer who has understood his time.” He died in 1973.

FED-XX: The first women to become FBI agents completed training at Quantico, Va., on this day in 1972. The new agents, Susan Lynn Roley and Joanne E. Pierce, graduated from the 14-week course with a group of 45 men.

“Inspiration exists, but it has to find you working.”

— painter Pablo Picasso, who was born on this day in 1881 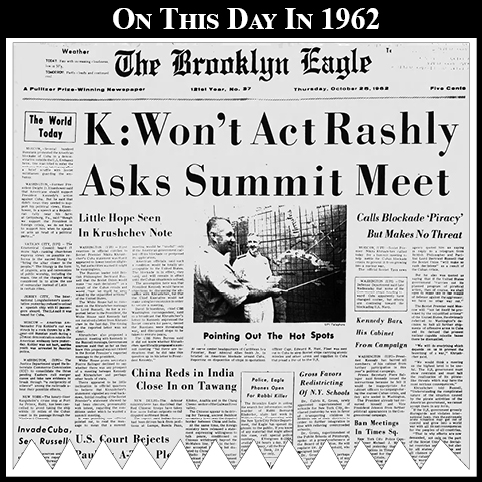