Vision Zero in Crisis: 2021 now on track to be deadliest year in De Blasio era 2021 is now on track to be the deadliest year for traffic violence under Mayor Bill de Blasio’s leadership, according to a new data analysis from the first six months of 2021, released by Transportation Alternatives and Families for Safe Streets on Wednesday. Through June 30, fatal crashes killed at least 124 New Yorkers — more than the first half of any year in the de Blasio administration. Transportation Alternatives and Families for Safe Streets are calling for City Hall and our city’s next leaders to immediately enact life-saving measures on our streets – including taking steps to implement NYC 25×25, a plan to give back 25 percent of NYC’s streetspace to people, not cars.

“More people are dying on Mayor de Blasio’s streets because he failed to quickly and aggressively scale the safety solutions of Vision Zero that he knows work, instead choosing to deliver piecemeal projects and unfulfilled promises,”  said Danny Harris, Executive Director of Transportation Alternatives. “We need Mayor de Blasio to fast-track redesigns on dangerous corridors, and we need the next mayor and City Council to significantly expand Vision Zero and to deliver on NYC 25×25 and prioritize people over cars in this city.”

“Every month in 2021 we are breaking records for lives lost to traffic violence. These are our neighbors, our parents, our siblings, and our children — killed because our elected leaders failed to expand the significant early success of Vision Zero. We need the next administration to act much more forcefully to expand Vision Zero to every neighborhood, and combat the public health crisis of traffic violence. And we need Mayor de Blasio, in his final months, to take immediate action to prevent 2021 from being the deadliest of his tenure,” said Families for Safe Streets member Judy Kottick, whose daughter Ella Bandes was struck and killed by the driver of an MTA bus in 2013. 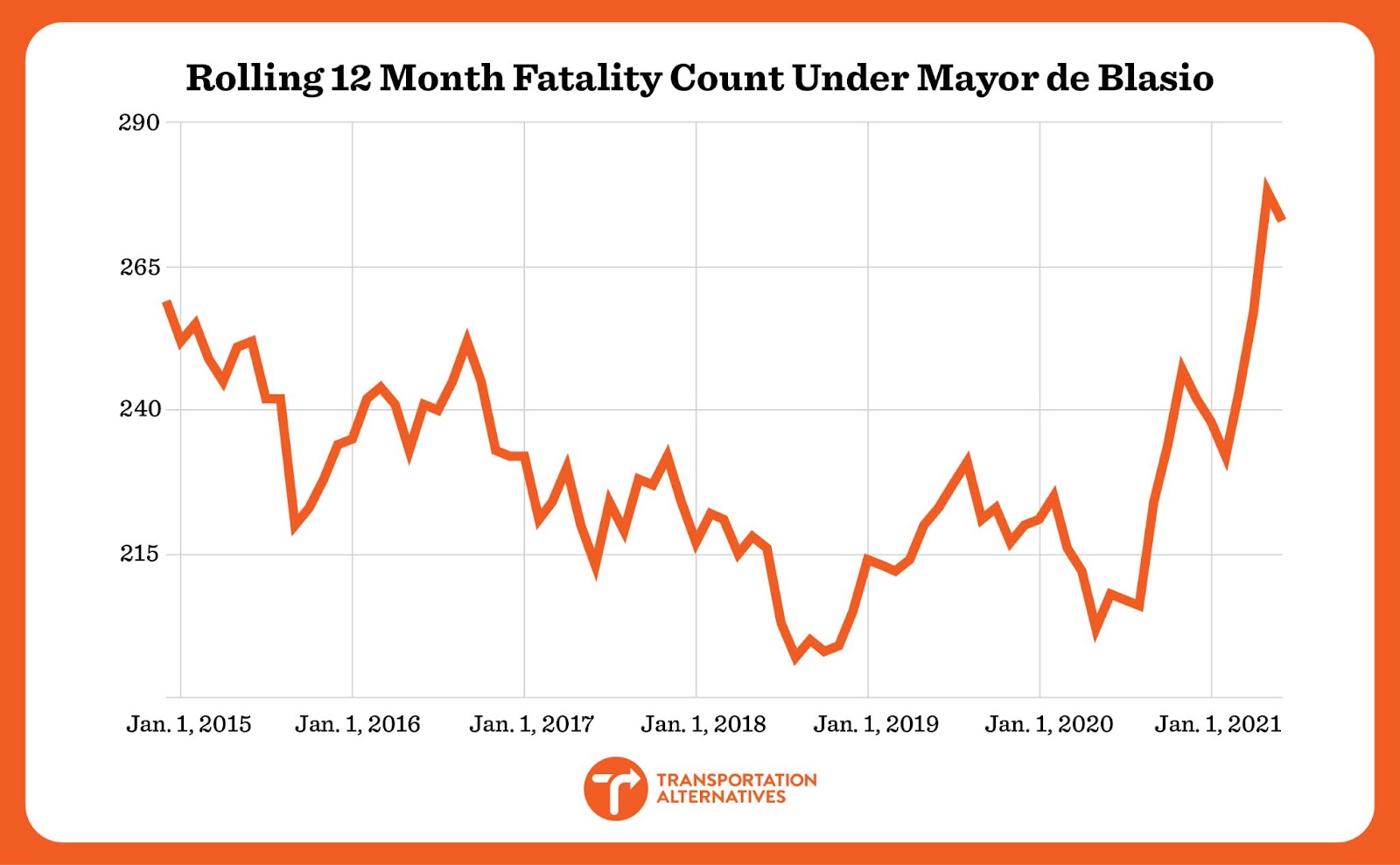 Drivers have killed more than 1,700 individuals since Mayor de Blasio took office. Even before the pandemic, traffic violence was rising. Pedestrian deaths increased year-over-year in 2018 and 2019. Cyclist deaths nearly tripled from 2018 to 2019.  This year, the numbers continue to rise – partially fueled by a speeding epidemic and dangerous rise in SUV ownership – and are reaching grim milestones:

What the Current Administration Must Do

The solutions that save lives on our streets are well known and proven many times over. Mayor de Blasio controls the streets across the five boroughs. He must scale what works. He must fast-track life-saving street redesigns on dangerous corridors across the five boroughs. He must heed the recommendations of his own Surface Transportation Advisory Council, which he has ignored for a year. He must ensure the Streets Master Plan, to be published in December, employs best practices from cities worldwide and sets up our streets to be healthier, fairer, and safe for all in coming years. The plan will only be a success if he begins to dedicate additional resources, contractors, materials and supply chains to reach these goals. Mayor de Blasio cannot leave these critical responsibilities to his successor.

In their final months, the current City Council must also build upon their pioneering legislative work, such as the Streets Master Plan, and pass additional measures to break New York City’s car culture and make our streets safe and equitable.

What the Next Administration Must Do

In the next administration, people must be prioritized over private vehicles. To date, 200 local organizations have signed on to Transportation Alternatives’ NYC 25×25 challenge, calling on the next mayor to convert 25 percent of space for cars into space for people by 2025. This vision is proven to help address air quality, climate change, economic inequality, and will also be a key way to reach Vision Zero. Fewer cars means fewer deadly, multi-ton machines on our roads. More car-free spaces means less conflicts between cars and vulnerable road users. Expanded sidewalks will lead to narrower travel lanes, requiring drivers to move at slower speeds. Our next mayor must combat the harm that cars inflict upon New Yorkers. They must put streets to better use than prioritizing the movement and storage of lethal multi-ton vehicles.

What Albany Must to Do

As discussions continue around the NYS Legislature returning for a special session this summer, the Assembly must pass Sammy’s Law without delay. This legislation, which already passed the Senate, would allow New York City to set lower speed limits on its streets. Every one mile per hour reduction in driving speed is shown to result in a 17 percent decrease in fatal crashes. Other cities that have lowered the speed limits found this to be an effective tool to rein in speeding. In Portland, the number of cars driving 30-35 mph dropped 26 percent and the number of cars driving over 35 mph dropped 47 percent when the speed limit was lowered from 25 to 20 mph, as Sammy’s Law would allow.

Next session, the legislature must address the traffic violence crisis and pass the entire package of lifesaving bills in the Crash Victims Rights and Safety Act.