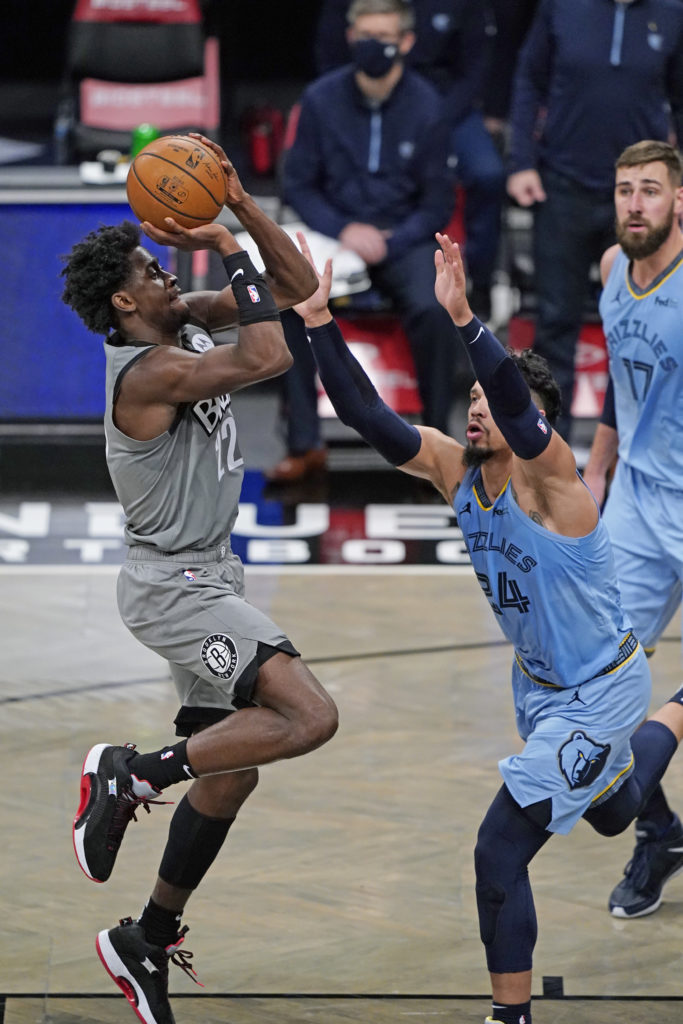 Despite a virtuoso effort by Caris LeVert, the short-handed Brooklyn Nets lost their second straight game at Barclays Center on Monday night. AP Photo by Kathy Willens
Share this:

First, the Nets got the news Monday that Spencer Dinwiddie, one of their key reserves and arguably the top sixth man in the Eastern Conference, will likely miss the remainder of this highly anticipated season due to a partially torn anterior cruciate ligament.

Then, Brooklyn went out and tried to beat the previously winless Memphis Grizzlies without the superstar tandem of Kevin Durant and Kyrie Irving, both of whom were given the night off on the second leg of an early season back-to-back set.

Though Caris LeVert, Timothe Luwawu-Cabbarot, Jarrett Allen, Joe Harris and Chris Chiozza did their best to remind Brooklynites how well they played together this past summer at the NBA’s bubble site in Orlando, Florida, it just wasn’t enough.

LeVert scored 28 points, handed out 11 assists and picked up five steals but misfired on a pair of potential game-winning shots in the final seconds of regulation as the Nets suffered their second straight loss, 116-111, in overtime to the Grizzlies at a still-fanless Barclays Center.

“As far as the play going into overtime in regulation, it was just an iso(lation play) up top,” LeVert said of the second of two 26-footers he missed with the game knotted at 106-106 and just 1.1 ticks left on the clock.

“I practice that shot every day. I’ll live with that,” he added.

Despite missing their first five shots in the extra session, the Nets still had a chance to take the lead with 5.6 seconds remaining, but Harris failed to hit a 3-pointer that would have erased Memphis’ 113-111 lead.

“Got it, had a pretty good one dribble, pull up 3 look at it. It just didn’t go down,” lamented Harris, who scored 14 points.

“It’s tough because you try and execute stuff late game but you definitely don’t want to be necessarily in that position,” he added. “There was a lot of things over the course of the game that we could have cleaned up and never got in that spot.”

Reigning NBA Rookie of the Year Ja Morant only managed seven points for Memphis before leaving in the second quarter with an ankle injury. But Kyle Anderson picked up the slack for the Grizzlies (1-2), scoring 28 points and grabbing seven rebounds.

Luwawu-Cabarrot poured in 21 points, Chiozza added 14 and Allen ripped down a game-high 15 boards for Brooklyn, which will wait to see how Dinwiddie comes out of surgery on the injured right knee this weekend.

“Just want to say, hat’s off to Spence, man. I know that’s a really tough injury. That’s one of my brothers,” said LeVert.

“We’ve built a close bond over these last couple of years. So definitely with him, prayers with him. I spoke to him earlier today, he seemed to be in good spirits. Definitely, definitely praying for him, fighting for him for the rest of the season for sure.”

As will Durant and Irving, when they return to the Barclays hardwood Wednesday night for the opener of a two-game set here against the Atlanta Hawks.

The dynamic duo paced Brooklyn to a pair of wins to open the campaign, but both sat out Monday after playing 36 minutes apiece in Sunday’s 106-104 loss at Charlotte.

“I think it’s sort of next-man up mentality. Everyone has to (step) up and embrace that the role they have when two of our most pivotal players on both ends of the ball are gone,” said Harris.

“But the thing at the end of the day we have enough depth where we can play well, we can play well together when we do have a man or two out. It’s just one of those things where it is so early in the year where I think for chemistry’s sake, unity’s sake it’s the first time we have played without Kevin and Kyrie.

But it won’t be the last as the Brooklyn hierarchy, including new head coach Steve Nash, are watching the tandem’s minutes closely.

Durant missed all of last season while recovering from an Achilles injury and Irving was limited to 20 games during his first year in Brooklyn due to knee and shoulder issues.

Both are likely to take occasional nights off during the NBA’s 72-game grind toward the playoffs for the Nets (2-2), who will also host Atlanta on Friday night.

Dinwiddie, who missed Brooklyn’s bubble site experience due to a positive test for COVID-19, suffered his injury during the third quarter of Sunday’s game in Charlotte. He averaged 6.7 points, 4.3 rebounds and 3.1 assists while logging 21.4 minutes over the Nets’ first three contests.

His loss could have crippled Brooklyn’s postseason hopes a season ago.

But for now, the Nets are still clinging to the belief that all will be well as long as Durant and Irving are healthy and ready to lead this franchise toward its first-ever NBA crown.

“We’ve gone through all of training camp, the preseason games everything where (Durant and Irving) are obviously the focal point,” noted Harris.

“And without them out there, guys like Caris, even Chris Chizza it just provides an opportunity for them to step up and be the primary sort of ball handlers and facilitators on the team.”

Nothing But Net: Nash was asked if he had learned anything during his first four games on the bench, especially after having to match wits with Memphis head coach Taylor Jenkins throughout the fourth quarter and overtime of Monday’s loss. “I’m not sure that I’ve learned anything specific, except obviously it’s a great experience for me to be in that situation that you can’t replicate that I’ve never been in before,” he said. “So, it’s important for me to feel it and to know what it takes to manage a game on the sidelines there. That was good for me obviously to get as many reps as I can over there in those situations. Lot of learning for me to do as well, but our staff does a great job and our players played hard, and that’s the most important thing.”