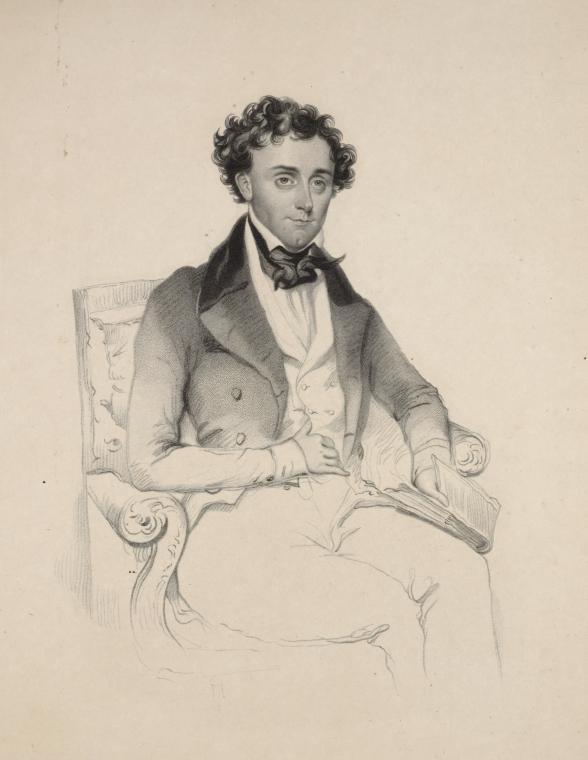 Popular early-1800s entertainer Thomas D. Rice didn’t invent blackface, but he is credited with popularizing it with the racist, career-defining “Jim Crow” song and dance that made him a star — and later lent its name to the segregation laws that were still in effect 100 years after Rice’s death.

Born in 1808 to working-class parents on Manhattan’s Lower East Side, Rice is interred on a hill in Brooklyn’s Green-Wood Cemetery; today, his gravesite lies literally in the shadow of the great Steinway family’s.

We recently took a stroll to Rice’s burial place with historian Zebulon Miletsky, PhD, an assistant professor of Africana studies at Stony Brook University. The following is an edited transcript of our conversation about Rice’s — and New York’s — connection to minstrelsy, blackface and the centuries-long legacy of slavery.

Dr. Zebulon Miletsky: I weave Thomas Rice into a lot of the classes I teach, because it’s relevant to African-American history, and it’s also obviously relevant to popular culture. Inevitably we’ll end up talking about how culture and art inform life, and how life informs art.

ZM: True. I’ve written an article that looks at Jim Crow. I was going through this library database that said, “Subject: African-American history. Name: Crow, James.” I was like, “James Crow?” … If there’s any doubt that few people know who or what Jim Crow is, I figure that if librarians put “James Crow,” then nobody knows.

EK: Talk to me about the origins of minstrelsy.

ZM: My understanding is that the Jim Crow character that Thomas D. Rice did was not the first use of blackface, certainly. In Europe they were using burnt cork to do this kind of imitation. But minstrelsy and blackface in America came of age around the same time as the abolitionist movement. The end of slavery was coming.

EK: Was it a backlash against that?

ZM: Maybe subconsciously. This stuff all dwells in the realm of the unconscious. It must have had a particular resonance and cachet with American society. You get a snapshot of America. If one believes the myths that are being told about slaves and slavery and Black culture, you almost get a sense of an invisible people.

But what gives lie to that whole thing is this white obsession and need to perform as Black people. The takeaway point is that this exercise in blackface and minstrelsy was something largely done by white people mainly for the entertainment of other whites. And then it became so popular, and so the main source of popular culture at the time, that even Black people were blackening their already-dark skin to do blackface.

The funny thing about all this is that I’ve been teaching about Thomas D. Rice for a long time. Over the years, I’ve gained a deeper understanding of the role that he played and how important it was. For example, I thought for a long time that the initial “D” was for “Daddy,” because that was his nickname, his performing name.

But it’s “Dartmouth!” He was born in Manhattan, with a working-class background. He was a Northerner.

EK: You find out that Justin Trudeau did blackface, and Robert Downey, Jr. was in blackface throughout “Tropic Thunder” … I don’t think it’s going to go away.

ZM: There’s this guy who was a major cultural historian who, in explaining the blackface phenomenon, was saying it’s not just white people performing in blackface; it’s white people releasing themselves in blackface. It’s just interesting that finding a release, for those people, meant being Black.

EK: I found Rice’s [Jim Crow] song online. It does have the N-word in it. It’s got a lot of lyrics. One of them is, he’s the white man, [made up] as a Black man, telling Blacks not to laugh at whites. And then in the next round, he says, basically, “I’m so happy I’m Black, because I get to be a star.” Because he wasn’t a star until he did blackface! He was broke until he did the Jim Crow character and hit on the zeitgeist.

ZM: Looking at it purely from a New York lens, this is the place for vaudeville and performance, Broadway, musical theater… To popular blackface performers, I think it was nothing more than, “I came up with a successful character that’s working.”

EK: Were there perceptions back then that Black people had an edge on entertaining?

ZM: I hadn’t thought about that. But entertainment is an area where African-Americans have been able to be present over a longer period. Ultimately it becomes a way of dialoguing with the country itself. Remember Al Jolson …

EK: He was huge. And he did blackface, famously. So that was the influence of Thomas Rice.

ZM: There’s some connection with Brooklyn, with New York, in earlier times, being this way of conceptualizing the country. New York in the 1800s was never as liberal and free of prejudice as we might like to think because it was in the North. The truth is, there are a lot of examples where New York had a sympathy or empathy for the South, for Southern ways and traditions.

EK: The fact that Rice’s character was so successful to New York crowds proves that. I went on to FindaGrave.com, where you can buy virtual flowers for people … A guy on there says that he’s an Al Jolson fan. But then you have some white women leaving him flowers, with no explanation.

EK: Then you have a couple of really moving messages. [Reads], “I am writing this because of how this man singlehandedly perpetuated the influence of discrimination by his minstrel acts for over a century. The legacy of his shameful practice has had a profound effect in this country which is still felt today.” That was one person’s message. And somebody else said, “I will note my objections to the memorial of this individual. His ‘act’ perpetuated the suffering of a segment of the American population for decades … for the record, he should be the object of scorn …”

ZM: Wow. This is why I try to fit him in in every discussion. There are these sort of pivots in American life that say so much. This one of them. In the current moment, when identification with white supremacy seems to be on the rise … Thomas D. Rice is a hero in that narrative. I find it fascinating that people derive such satisfaction and pleasure from imitating people that they supposedly say they hate. It just shows you that it’s not as simple as one group not liking another. It’s much deeper than that.

EK: With history that’s disturbing, do you teach it so that people don’t forget, and use the N-word, and use all of it? Do you censor it and teach it partway? Or do you completely erase it?

ZM: We need to have a sensitivity about history. You’ve got to know it, first, to do that. For example, I come from a racially mixed background. My mother’s African-American; my father’s Jewish. White. But people don’t always know where I’m coming from. So you have to be sensitive to people’s past. And there’s no way to have a sensitivity about the past without knowing it … I don’t think too many people know that Thomas Rice is buried here.

EK: We’re close to his grave, by the way.

EK: I think it’s in this section right there … I had thought, “Oh, he’s in an unmarked grave because people will deface it.” Come to find out that’s not true.

ZM: I read, too, that it was unmarked. Oftentimes the group of people that have unmarked graves are African-American. But there’s no reason Rice would have an unmarked grave, necessarily.

EK: When you go on the Green-Wood website, they call him “the father of minstrelsy.”

ZM: The power of art. I think that “unmarked” thing is just to throw people off.

At this point, photographer John McCarten locates Thomas Rice’s gravesite, but not his actual headstone. While there is a single legible stone memorializing Rice’s wife and two children, all of whom predeceased him, the stones surrounding it in Section 47 have all been wiped clean by the elements. One is now lying facedown in the dirt; the three of us pick it up briefly to verify that it, too, is blank.

EK: Here’s what it says on the Green-Wood site. [Reads], “Thomas Dartmouth Rice, the father of minstrelsy (performances by white performers of ‘blackness’ in exaggerated costumes and blackface makeup, supposedly for comedic effect, but relying on racist derision and stereotyping at its core, from the mid-19th century well into the 20th century) …”

ZM: It shows that people saw Rice’s act as being perfectly acceptable. He was the fun-loving avatar of it. … The system that bears his character’s name, Jim Crow, is our whole system of racial segregation, that brought us to the most painful experiences. That’s Rice’s legacy.

EK: How crazy that there’s a grave that’s toppled over right here.

EK: Maybe it is his. It would make sense to me.

ZM: Me too. That’s symbolic. I did not really want to come find some beautiful mausoleum for Daddy Jim Crow.

EK: You wrote an article about Plessy v. Ferguson?

ZM: Yeah. That’s separate-but-equal — “Jim Crow” — at the Supreme Court level. The North has a role in it, too. And this is a good example: A Northerner, ironically, is the one responsible for Jim Crow, the idea. Not someone from the South. Jim Crow is a Northern phenomenon. And that needs to be said. Jim Crow has important origins in the North. In New York. And Thomas Rice is the best example of it.

EK: And he’s buried in Brooklyn. But his legacy has not remained buried.

ZM: And where is his grave? Maybe that’s why it’s “unmarked.”

EK: But it’s not really unmarked. It’s just eroded. By time. Time erased his name from his gravestone. But it still lives on.