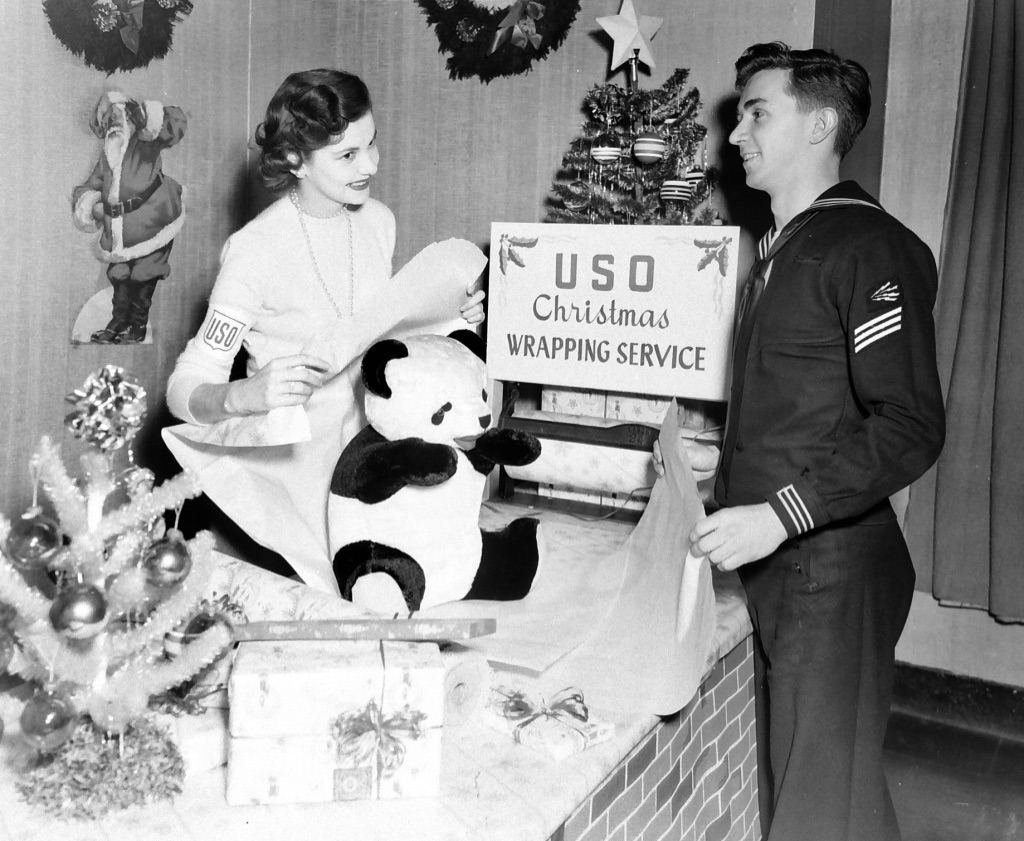 These past four days supplied at least a glimpse of the many and important ways U.S. citizens on the home front – and in Brooklyn in particular – helped the war effort. None of those millions of people paid a price like the soldiers and their families did, but when the situation is grave, every little bit helps, and these “little bits” added up to a whole lot.

For today I’ll add a couple of pictures of one other organization in action during the war years. It was started in 1941 but has continued to serve the armed forces since that war ended. The other pictures are a few post-war shots that help us remember and look back, but with the horror and sacrifice behind us. 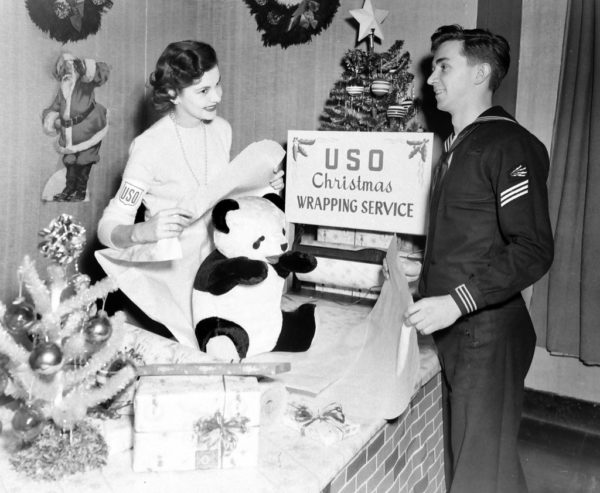 The United Service Organization (USO) has worked since its inception to be a home away from home for U.S. Armed Forces. They have provided services like the gift wrapping shown here, and many others – such as social events, help adjusting to new locales, and, of course, entertainment. With almost one and a half million volunteers between 1941 and 1945, the USO was another way the nation came together to support the war, in this case by making life a little easier and even pleasant, when possible, for the people who had to do the actual fighting. The Japanese surrender, officially ending the war, was announced in Japan on August 15th. But because of the time difference, Americans heard about it when it was late afternoon on August 14th. This is how a great many streets and neighborhoods greeted the news throughout the country. Here’s how it looked, through my father’s camera, on my street exactly a year and a day before I was born. My two brothers are among the revelers.

(I posted almost the same scene to mark the 75th anniversary of VJ Day four weeks ago. But it bears repeating this week as part of the week’s topic. This shot was taken moments before or after the one shown last month.) Back near the beginning of my displays with the Eagle – May 12th, to be exact – I showed a picture of Omar Bradley. The theme then was interesting individual people. Here I show him, in a different context, to illustrate the ongoing war-related realities in the years after 1945. He’s smiling with a group of recuperating soldiers in a Brooklyn VA hospital.

Bradley was the most senior commander of American ground troops in Europe from the time of D-Day (June 1944) to the surrender of the Germans in May 1945. After the war, Bradley headed the Veterans Administration, and then became Army chief of staff in 1948 and chairman of the Joint Chiefs of Staff in 1949. The first picture shows the parade passing in front of the JWV headquarters, with bunting decorating the building and the reviewing stand in front. There seems to be quite a crowd of onlookers. Though the photo is undated, the cars indicate it’s definitely post-war, but not by more than a couple of years. So, the WWII veterans and their families have very recent memories; the older members, WWI veterans, have more distant memories, but great respect and admiration for their younger colleagues.

The second photo shows the reviewing stand, with Borough President John Cashmore in attendance (center of platform, business suit, no hat) and many uniformed veterans. The final photo gives a close look at some paraders.