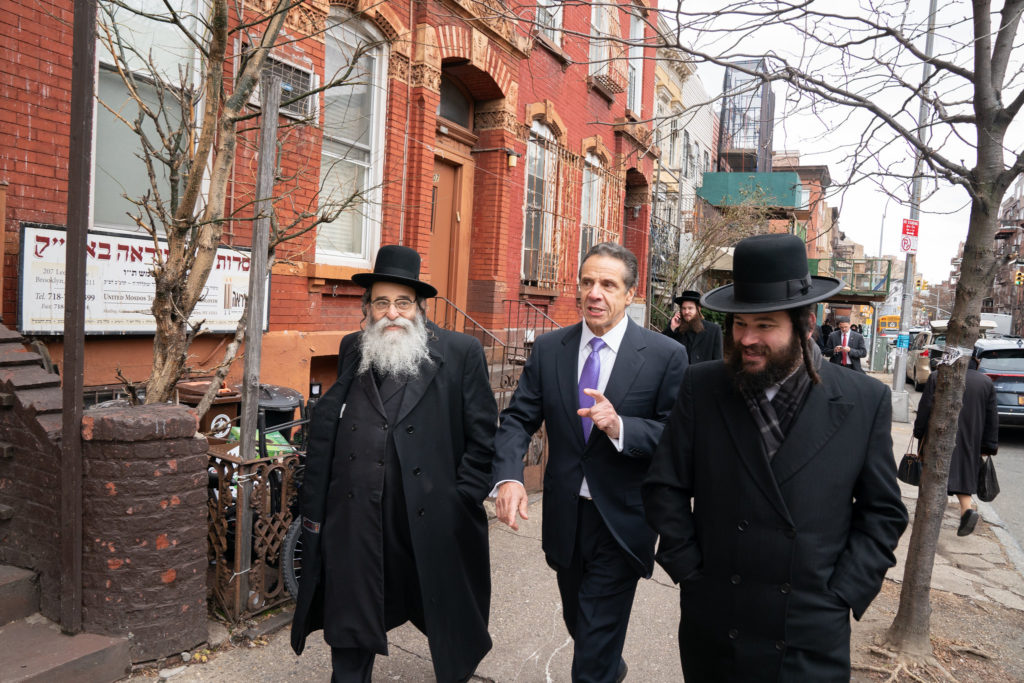 Gov. Andrew Cuomo visited a Hasidic Jewish neighborhood in Williamsburg with Rabbi David Niederman to show support for the Jewish community in the wake of a stabbing in Monsey, N.Y., and a rash of other anti-Semitic attacks, many of them in Brooklyn. Photo courtesy of Gov. Cuomo’s office
Share this:

A series of attacks on Hasidic and Orthodox Jews in Williamsburg and other Brooklyn neighborhoods were part and parcel of the fact that American Jews were targets of more anti-Semitic incidents in 2019 than any other year over the past four decades, the Anti-Defamation League reported Tuesday.

The ADL’s count of anti-Semitic assaults involved 95 victims. More than half of the assaults occurred in New York City, including 25 in Brooklyn. Eight of those Brooklyn assaults happened during a span of eight days in December, primarily in Williamsburg, Crown Heights and Borough Park, all neighborhoods where many Orthodox Jews live.

“Objects were thrown at victims, antisemitic slurs were shouted, and at least three victims were hit or punched in their heads or faces,” says the report.

In Brooklyn, for example:

Because of these and other incidents, the NYPD in December decided to beef up its presence in Brooklyn’s Hasidic and Orthodox Jewish communities as the city rolled out anti-bias initiatives in classrooms, on the streets and on social media to combat the “crisis” of anti-Semitic attacks, Mayor Bill de Blasio said.

Jonathan Greenblatt, the Anti-Defamation League’s CEO, attributes last year’s record high to a “normalization of anti-Semitic tropes,” the “charged politics of the day” and social media. This year, he said, the COVID-19 pandemic is fueling anti-Semitic conspiracy theories.

The ADL defines an anti-Semitic assault as “an attempt to inflict physical harm on one or more people who are Jewish or perceived to be Jewish, accompanied by evidence of antisemitic animus.”

Three of those 2019 assaults were deadly. A 20-year-old former nursing student, John T. Earnest, awaits trial on charges he killed a woman and wounded three other people during an attack on Chabad of Poway synagogue near San Diego in April 2019. The gunman told a 911 dispatcher that he shot up the synagogue on the last day of Passover because Jews were trying to “destroy all white people,” according to prosecutors.

Attacks in Jersey City, New Jersey, killed a police detective in a cemetery and three people at a kosher market in December. Authorities said the attackers, David Anderson and Francine Graham, were motivated by a hatred of Jewish people and law enforcement.

A 37-year-old man, Grafton Thomas, was charged with stabbing five people with a machete at a Hanukkah celebration at a rabbi’s home in Monsey, an Orthodox Jewish community north of New York City. One of the five victims died three months after the Dec. 28 attack.

The ADL report doesn’t try to fully assess online anti-Semitism, but it does include incidents in which individuals or groups received anti-Semitic content in direct messages, on listservs or in social media settings “where they would have the reasonable expectation to not be subjected to anti-Semitism.”

The ADL says it tries to avoid conflating general criticism of Israel with anti-Semitism. “However, Israel-related harassment of groups or individuals may be included when the harassment incorporates established anti-Jewish references, accusations and/or conspiracy theories, or when they demonize American Jews for their support of Israel,” the report says.