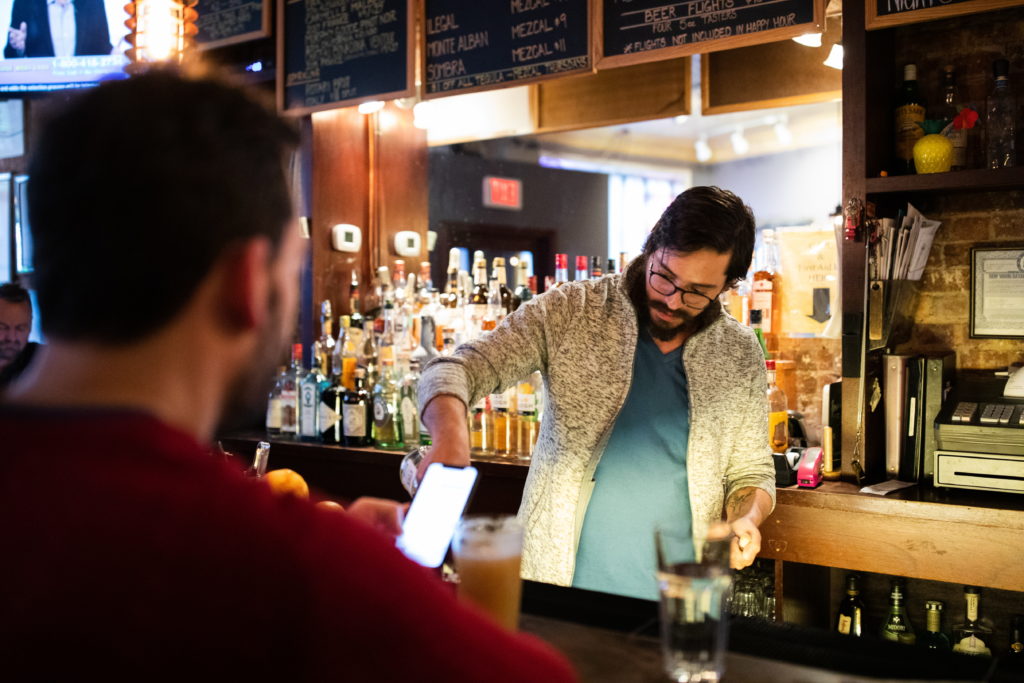 The bartender at The Brazen Head bar pours a drink on Monday night. Photo: Paul Frangipane/Brooklyn Eagle
Share this:

By order of Gov. Andrew Cuomo, Monday was the last night bars were allowed to be open in New York City due to the novel coronavirus pandemic. That evening, many establishments in Brooklyn were filled with customers trying to get in a final drink — despite warnings that social distancing was necessary in the time of COVID-19.

The Brooklyn Eagle went on a pub crawl to gauge the mood.

The Brazen Head on Atlantic Avenue, not far from the Brooklyn House of Detention, was packed.

“I think people are just trying to get their last hurrah in,” Brazen Head’s owner Sasha Kotlyer told the Eagle.

The bulk of the Brazen Head’s business comes from the courts and Downtown offices, and most of them are now closed.

“We have to lay off all ten of our employees, unfortunately,” Kotlyer said. “It’s just me and my GM and my assistant GM that are staying on board.”

Social workers Ben (who didn’t want to give his last name) and Paige McIalkcke were having a couple of beers at the Brazen Head Monday night.

“We both do community-based health care with medically frail people,” Ben said. The job requires them to wear masks, use Saniwipes and take other precautions even without the added stress from COVID-19.

“So … no vacation for us,” he said. “We wanted to have one last vent session at a bar before we got quarantined.”

“We still have work tomorrow so we can’t get too drunk,” Paige said.

The mood was sober (so to speak) at O’Keefe’s Bar on Court Street near Brooklyn Borough Hall.

“It’s frustrating because there’s no end date. And no one knows, do we have the resources to help?” said Crown Heights resident Haydn Long, sitting at the bar near the front.

“Can I get unemployment? Are the landlords going to stop collecting rent? The markets are getting — wow. You hear capitalism, then you hear socialism … Maybe if we had health care right now,” he mused.

Long, the former general manager of Cent’anni, an Italian restaurant in Crown Heights, asked people to remember the restaurant owners.

“If you’re going to order from a restaurant, don’t use Seamless, don’t use Grubhub [because of] the fees that restaurants have to pay. Profit margins are so slim,” he said.

The Someday Bar near Hoyt Street on Atlantic Avenue was full of last minute drinkers. Aaron Curran was enjoying a Finback Sour.

“I go to bars pretty much every night, but I have a lot of friends that work at bars so I’m kind of concerned what they’re going to do,” Curran said. “A friend of mine called and said he’s got at least eight weeks off, and a lot of people don’t have rent saved up months in advance.”

Curran said he’s currently doing bicycle delivery, “and since Thursday it’s been crazy busy. Maybe I’m going to figure out how to do deliver drinks, help my friends out.”

“Sometimes I feel bad because I’ve been going to bars every night to support my friends, and then I feel like I’ll read on Twitter that people were like, ‘Get out of the bars, go home.’ But I’m just trying to support people,” he said.

“I have no idea how we’re going to cope,” said Megan Rickerson, Someday’s owner. “I’m hoping that our landlord will understand with the rent. Any longer than a couple weeks I don’t really know, without some forgiveness, what we’re really going to be able to do.”

“We’re kind of worried that a lot of people are leaving the city. So who’s going to be left?” she said.

Someday has only been open for eight months. “That’s why this is kind of devastating, because we just really started catching our stride,” Rickerson said. She added, “I had to lay off my kitchen yesterday. That was really hard because we are so close.”

Elizabeth Stemmer, who teaches in Crown Heights and lives in Boerum Hill, was sitting around the bar’s corner from Curran. She said she thought Cuomo and de Blasio were doing the right thing by closing the bars.

“As a person in their 30s, I very much enjoy going out to the bars. But I’m also very much a fan of social distancing. I’m petrified of New York becoming the next Italy, the next Seattle. So I think this is the responsible thing to do. That being said, I fully believe in supporting my local businesses. I love this bar. The people at this bar, I want them to make it through this crisis, I want to support them in any way that I can in the most hygienic, responsible way that I can.”

She added, “It’s going to be great when we can come back, and we’re going to have the biggest party!” A new take on social distancing: canoeing the Gowanus Canal Coronavirus update: The Navy’s ‘floating hospital’ is on its way to boost city’s health care capacity