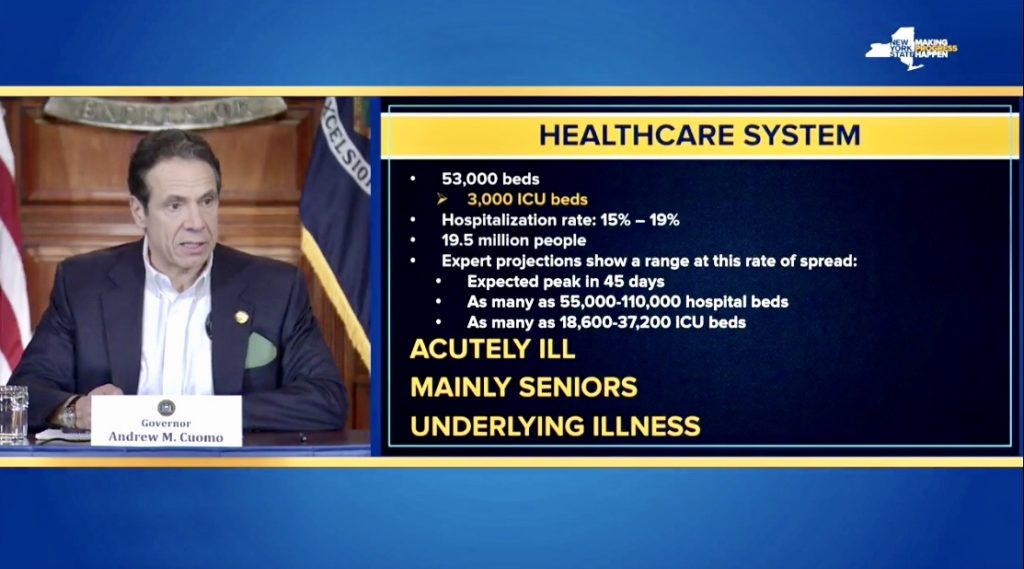 Gov. Andrew Cuomo said on Tuesday that the coronavirus outbreak is expected to peak in 45 days, and laid out his plan to build hospital capacity. Photo via New York State, livestream
Share this:

Gov. Andrew Cuomo told New Yorkers on Tuesday that “the buck stops on my desk” as he laid out the state’s plan, and to some extent, the region’s plan, for combatting the novel coronavirus.

Experts have predicted the COVID-19 outbreak will peak in 45 days, Cuomo said, setting an unprecedented deadline for creating thousands of new hospital beds to handle the expected influx of patients with acute respiratory illness.

Asked whether he would consider implementing a “shelter in place” order, like the one put into effect in six California counties last night, Cuomo said he’s “resistant to nothing.”

“Just yesterday we took very, very dramatic steps,” he said, referring to the statewide order to shutter restaurants, bars and entertainment venues. “The curve is not flattening to a level we can sustain. Which would suggest that we’re going to take even more efforts to flatten the curve. That’s what we’re exploring now. It is likely that we’re going to take more steps to slow the spread by reducing the density.”

Cuomo went on to say that before imposing a shelter in place order in New York, he would first shut down other non-essential workplaces where people congregate.

The governor called for national unity at this historic moment, saying, “We’re not Democrats, we’re not Republicans, we’re Americans at the end of the day.”

A health care system under duress

After years of cutbacks, there are only 53,000 hospital beds in the state, including just 3,000 of the all-important Intensive Care Unit beds, of which 80 percent are currently occupied.

With the state’s current hospitalization rate for people infected with the virus somewhere between 15 and 19 percent, Cuomo projected New York would need between 55,000 to 110,000 additional hospital beds to handle the outbreak, and of these, 18,600 to 37,200 must be ICU beds.

ICU beds come with ventilators and other equipment, and “ventilators are very hard to get,” Cuomo said, due to demand from other parts of the world battling the virus.

The state is taking two tacks to reduce the stress on its health care system. The first is to “flatten the curve” with “dramatic closings to reduce density,” Cuomo said.

“If we can’t reduce the flow, we need to reduce the spread,” of patients coming in over time, he said.

He said New York is coordinating restaurant, bar and business closings with nearby states to reduce the number of people traveling across state lines to crowd into nightspots and other venues.

The region will also be coordinating other measures in the future to maintain a uniform approach, the governor said.

Warning that the number of novel coronavirus cases would soon “crash like a wave” on hospitals lacking the capacity to handle them, Cuomo said the state is moving immediately to increase hospital surge capacity. The State Department of Health is suspending some regulations to allow existing hospitals to increase space. Hospitals are hiring more staff, and New York is embarking on an all-out effort to build temporary hospitals and health sites.

The state will organize the National Guard and is working with building unions and private developers to find existing facilities — such as college dormitories and former nursing homes — that can be converted to backup medical facilities. Some facilities will be built inside tents, such as a testing center debuting on Tuesday at the Brooklyn Hospital Center.

Cuomo has also called on the Trump administration to throw the full powers of the U.S. Army Corp of Engineers into converting SUNY university dorms and government facilities into hospitals.

Cuomo said these times “are a character test for all of us.”

He quoted Rudyard Kipling: “‘What did you do at that moment when all around you lost their heads?’ What does government do? It does what it’s supposed to do, better than before. It does not engage in politics, even at a moment in history that is hyper-political.”

So far 10,000 people have been tested in New York State, and roughly 1,300 have tested positive, an increase of 432 since the last figures reported. About 19 percent of those testing positive have required hospitalization, and 12 people have died.