A high-rise hotel will likely replace a Schermerhorn Street townhouse, unless this councilmember gets his way 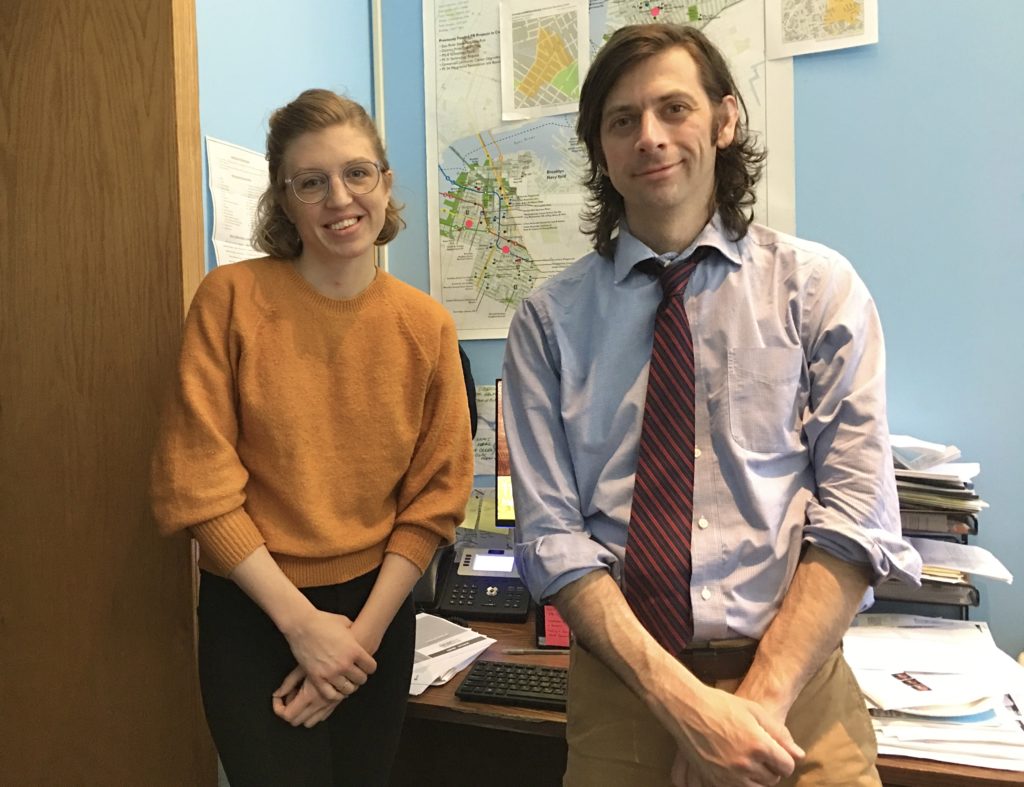 City Councilmember Stephen Levin is seen here with his Legislative Director Elizabeth Adams. This photo was taken a week before the City Council adopted a work-from-home policy because of the coronavirus. Photo: Lore Croghan/Brooklyn Eagle
Share this:

The new owner of a 1920s townhouse in Downtown Brooklyn is getting ready to tear it down and construct a hotel that’s likely to be a high-rise.

City Councilmember Stephen Levin is making an eleventh-hour effort to change the zoning in the area so the hotel could be at most 12 stories tall.

Property owner AWH Partners’ spokesperson told the Eagle the townhouse demolition will start soon. The site, which is on the Schermerhorn Street block between Boerum Place and Court Street, is just 33 feet wide and its current zoning allows a 26-story building to be constructed as-of-right.

That’s because upzoning was carried out in 2003 to enable Brooklyn Law School to build Feil Hall at nearby 205 State St. This big dormitory is the school’s main residence hall.

“In order to provide a rationale for Brooklyn Law School to not have a spot zoning, they swept up everyone as collateral damage, basically,” Levin said.

‘We should approach zoning in a rational way’

The area had just been rezoned in 2001, for less dense, less high-rise development than the 2003 zoning.

“My feeling on this is that we as a city generally should approach zoning in a rational way,” Levin told the Eagle. “And if we zoned something in 2001 as part of a broader comprehensive zoning in Downtown Brooklyn, then it was probably not the right thing to then undo that two years later.

“Now, what’s done is done,” he said. “But I think that there’s a compelling argument to be made that, even though there would be non-complying buildings, for example the Brooklyn Law School dormitory and others, the 2001 zoning was actually the correct zoning and it should go back to that.”

Rezoning is a time consuming undertaking. It requires a public input process known as a Uniform Land Use Review Procedure, or ULURP. If the City Council does initiate a downzoning effort, will it be too late to have an impact on the 88 Schermerhorn St. development?

“I would hope not, but I don’t know the answer to that,” Levin said.

The property owners could tear down the existing building and put in a new foundation, which would vest their current zoning, he said.

“We’re looking to meet with the building owner very soon,” said Elizabeth Adams, Levin’s legislative director. They’ve only had an initial phone conversation. (Adams is a candidate for Levin’s City Council seat, which he’s vacating in December 2021 because of term limits.)

Demolition could start ‘in the coming weeks’

A spokesperson for AWH Partners told the Eagle the developer is “exploring various designs for a hotel that would be permitted under current zoning” and hopes to start demolition “in the coming weeks.”

The spokesperson didn’t directly address a question about what the developer would do if the City Council does move forward with a downzoning application.

Levin told the Eagle he first looked into reversing the area’s zoning in 2015, when the previous property owners planned to construct a 27-story condo building. He talked to the Department of City Planning about it, but “it didn’t get a very enthusiastic response,” he recalled.

At that time, the idea was that the Downtown Brooklyn community would be the applicant in a ULURP filing, Levin said.

The City Council recently gained experience with this, Levin said — it was the co-applicant in the ULURP proceeding to close Rikers Island.

If you liked this story, read about community reaction to a rezoning effort in Vinegar Hill.