Construction begins on senior housing that will replace historic church 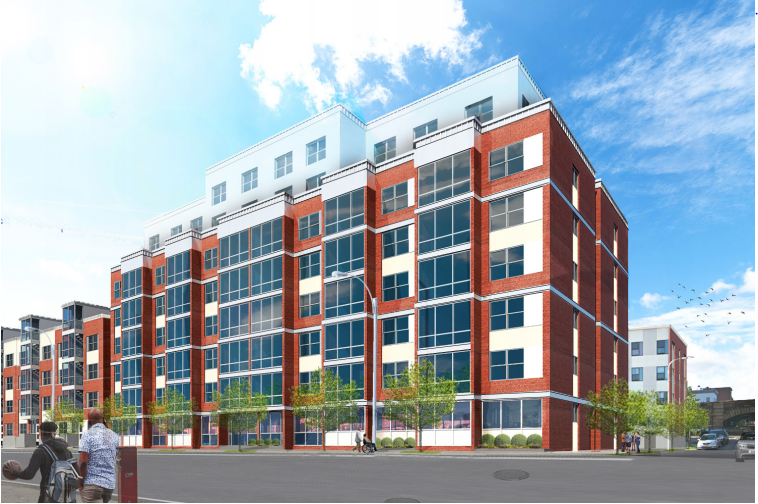 This is the design for Catholic Charities Loreto Apartments, a Brownsville affordable housing development for seniors. Rendering by RKTB Architects P.C.
Share this:

A low-income senior housing development is taking shape where a historic Brownsville church once stood.

Catholic Charities Brooklyn and Queens unveiled the design on Thursday for the eight-story, 135-unit apartment house it’s starting to construct on the site of Our Lady of Loreto, designed by RKTB Architects P.C.

The sleek brick-and-glass building, which will be called Catholic Charities Loreto Apartments, will have 81 units for formerly homeless seniors and boasts environmentally conscious design features, such as rooftop solar panels. The $48 million project’s construction is expected to take two years.

“You know, when you remember this particular site, you would always see the church from the train station. It has always been a beacon of light, a place of love and security. And it’s good to know that this particular site is going to continue to be a place of love, of comfort and security for some of our community’s most vulnerable, our seniors,” Karim told guests at the groundbreaking.

“It was hard to see the church go. But its blueprint will forever be here,” Karim later told the Brooklyn Eagle.

“As a good Catholic, I felt pretty bad that we had to tear down the church that was here. And I went to confession a few times for it — but I knew that it was for the right reason,” City Councilmember Rafael Espinal said at the groundbreaking.

The coalition’s members had tried unsuccessfully to get the church landmarked. They wanted it to be turned into a community cultural center.

The idea of making Catholic Charities Loreto Apartments project an environmentally sustainable affordable housing development for seniors and formerly homeless people was shaped by interfaith dialogue with Catholic and Buddhist leaders from Brooklyn, Chicago and Los Angeles, Bishop of Brooklyn Nicholas DiMarzio said at the groundbreaking.

It’s one of three such projects that will be built in the U. S. Other Catholic groups will construct the ones in Chicago and Los Angeles.

There will be further collaboration with the Buddhist community after Catholic Charities Loreto Apartments is built. Monks will lead yoga, tai chi and meditation programs at the property.

The 81 studio apartments for formerly homeless tenants are for people over the age of 55 who are frail or disabled and Medicare-eligible, she said. They can earn at most 60 percent of area median income, which is $44,820 per year for an individual, though they will likely make significantly less.

The maximum rent the formerly homeless tenants will pay will be 30 percent of whatever their income is, Swift said.

Tenants for these apartments will come to Catholic Charities Loreto Apartments through referrals from the city Department of Homeless Services, or be sent from nursing homes if they’re able to live independently with the help of supportive services, Swift said.

Onsite supportive services will include an on-call nurse, mental-health and substance-abuse counseling, help with the tasks of daily living, case management, exercise programs and nutrition classes.

Also, Catholic Charities Loreto Apartments will have 54 Affordable Independent Residences for Seniors. These units, which are for tenants aged 62 and older, will be a mix of studios and one-bedroom apartments, Swift said. AIRS is a New York City program that allows developers to add height and density to their projects when they include apartments for seniors.

The seniors housing site is adjacent to Catholic Charities Monsignor Anthony J. Barretta Apartments, a 64-unit low-income development for families on the site of Our Lady of Loreto’s demolished school, rectory and convent. It opened in 2013. RKTB Architects P.C. also designed the Barretta Apartments.

“It has been said that affordable housing is the biggest crisis facing New York City,” Monsignor Alfred LoPinto, Catholic Charities Brooklyn and Queens’ chief executive officer, said at the groundbreaking. “As one of the largest faith-based developers of affordable housing in the country, we understand how true this statement is.”