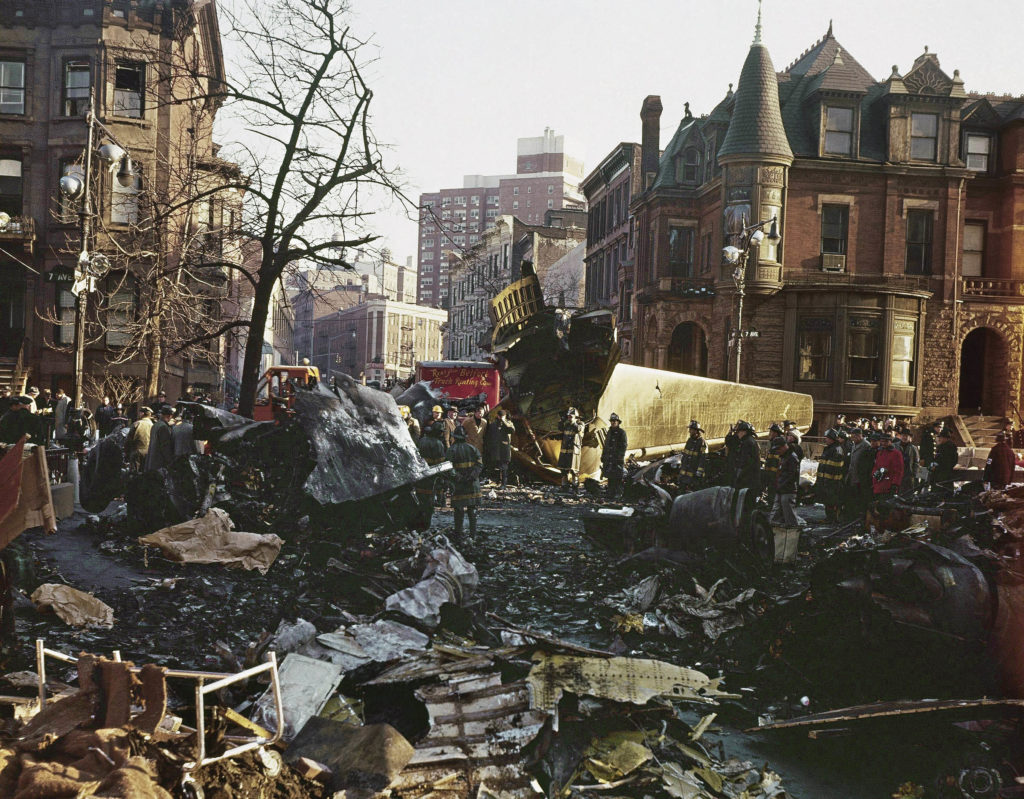 In this Dec. 17, 1960 file photo, the wreckage of a United airliner sits in the middle of 7th Avenue and Sterling place, the day after it crashed into the Park Slope section of Brooklyn following a midair collision with a TWA propeller plane one mile above New York City. Photo: AP
Share this:

On this day in 1960, a mid-air collision above the city sent the wreckage of a plane crashing through a Park Slope intersection.

The United Airlines flight struck a Trans World Airlines plane at a major airway intersection after experiencing a navigation system error. All 128 holiday travelers on both planes were killed, along with six bystanders, when the United flight careened through the intersection of Seventh Avenue and Sterling Place.

Jet fuel from the wreckage set 10 adjacent brownstones aflame, as well as a funeral home, a laundromat, a delicatessen and the nearby Pillar of Fire Church.

Accounts of the accident described bodies and wrapped Christmas gifts strewn among the rubble.

The United flight had been bound for Idlewild Airport, which would later become JFK. The TWA flight, which had been headed to LaGuardia, crashed in a Staten Island field.

The United flight’s data recorder showed that the plane had been 12 miles off course at the time of the collision, and that the flight’s captain had failed to follow instructions from air traffic control that told the plane to slow down.

The incident took place on the eve of the anniversary of the Wright brothers’ first successful powered flights in 1903. It was one of the earliest commercial airline disasters since passenger jet service’s popularization in the late 1950s.

Some buildings destroyed by the fire were rebuilt completely, but replacement brickwork is still visible at 123 Sterling Place. Newer brickwork near the top of 126 Sterling Place reveals where the United plane’s right wing cut through the building.

The crash left just one initial survivor. Eleven-year-old Stephen Baltz had been traveling from Illinois to visit family for Christmas in Yonkers. A snowbank extinguished his burning clothes, but Baltz died of pneumonia the next day from jet fuel fume inhalation at what is now NewYork-Presbyterian Hospital.

The hospital’s chapel houses a wall plaque that includes four dimes and five nickels that were in Blatz’s pocket during the crash. The plaque reads, “Our Tribute to a Brave Little Boy.”