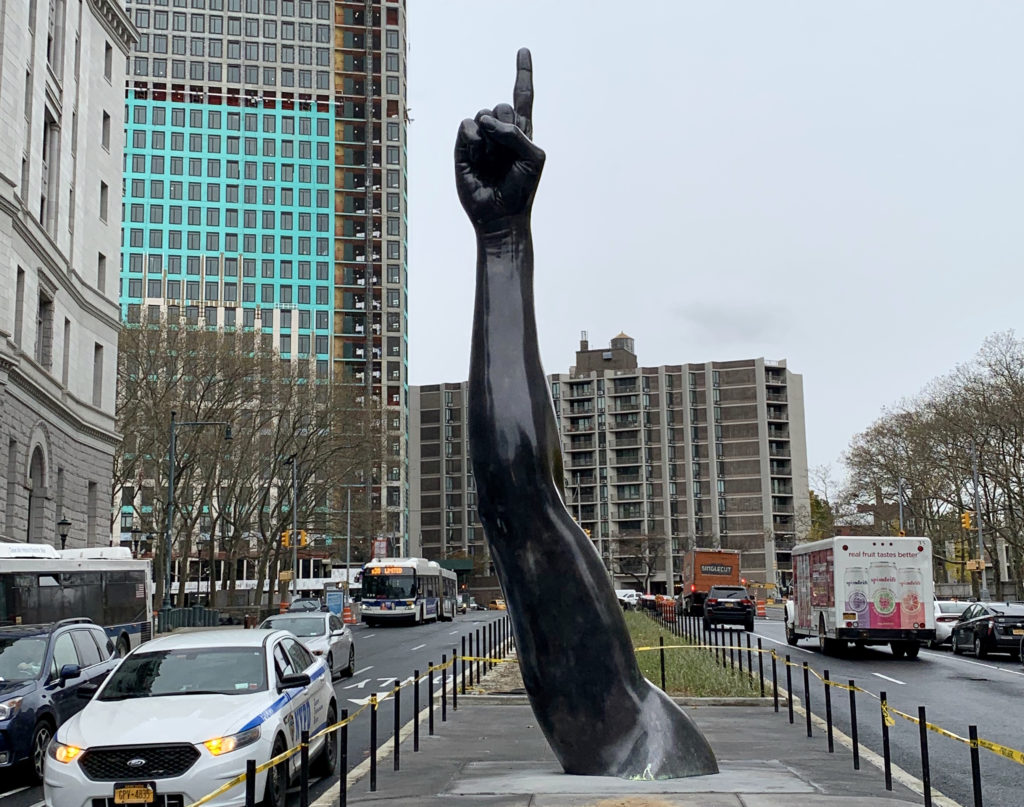 ‘Unity’ by Hank Willis Thomas, installed last week at Tillary and Adams streets in Downtown Brooklyn, has been generating a lot of buzz. Eagle photo by Mary Frost
Share this:

Brooklyn sculptor Hank Willis Thomas is scratching his head over recent claims that his striking new artwork, installed last week at Tillary and Adams streets in Downtown Brooklyn, has anything to do with Islamist symbolism or ISIS.

The 22 1/2-foot-high bronze arm, topped by a single pointing finger pointing to the sky, is called “Unity.” It has been capturing the imagination of motorists and pedestrians, some of whom stop to take selfies near the sculpture with their own hands extended.

“I tried, in ‘Unity,’ to give the feeling that you can be aspirational and be united, the values our country was founded on,” he said.

The city’s Cultural Affairs Department said in a tweet that the city’s newest work of permanent public art “echoes the Statue of Liberty’s iconic gesture & captures the unique spirit of Brooklyn as a place of uplift & ambition.” The city’s One Percent for Art program commissioned the work as part of the reconstruction of Tillary Street.

A brouhaha kicked off, however, when preservation activist Todd Fine was quoted by the New York Post on Sunday as saying that the work bore “a striking resemblance to the concept of Tawhid — the oneness of God — which has been co-opted as a signal by international terror group ISIS.”

“I am dumbfounded how this was allowed,” Fine tweeted.

Fine, president of the Washington Street Advocacy Group, who has in the past criticized the One Percent for Art program, told the Eagle, “I can’t think of any other core symbolism here besides the concept of Tawhid, or the Unity of God, in Islam. Both the piece’s name and its symbolism seem to point toward this.” Fine said he studies Arab-American literature at the CUNY Graduate Center.

One of the most amazing acts, I should say… I am dumbfounded how this was allowed… Muslims around the world will be in shock. Was @NYCulture aware of the symbolism? Does @NYCMayor know?

Thomas, who lives in Fort Greene and has a studio at the Brooklyn Navy Yard, says he was raised in Manhattan where he attended the Abyssinian Baptist Church.

“I don’t know anything about Islam,” he said.

Thomas pointed out that he has often depicted hands and arms in his artwork.

“I’ve always been interested in how a gesture can be interpreted in many ways. Most of us have hands and fingers and can relate to it when we see it. I’ve seen a lot of people mimic [the artwork],” he said.

Thomas said there were other inaccurate stories going around about ‘Unity.’

“Someone said the work was originally called ‘We’re Number One.’ That’s not even true! It started out being called ‘One,’ but I thought that was too singular. It was really inspired, mostly, by the Statue of Liberty. Unity and liberty are American values.”

Umar Tahir, an 18-year-old religious Muslim student at Fordham University, told the Eagle that he was “surprised when I learned it was specifically associated with Islam.”

“For me personally, the gesture is uplifting and inspiring and I have definitely never associated it with terrorism,” Tahir said, “And if the sculpture is referencing Islam, then I applaud the city for recognizing that the image is meaningful for Muslims around the world and that ISIS has wrongfully co-opted it. Of course, the sculpture is open to interpretation so I can’t judge what the artist’s intention was.”

Interpretation of an artwork is “always up to the viewer,” Thomas said. “I always have to relinquish my feelings. The meaning of a work changes over time. Hopefully, it will still be up 50 years from now and everything around it will change. So its meaning will change. Artwork exists on a different space-time continuum.”