November 14: ON THIS DAY in 1938, Britain protests Nazi attacks 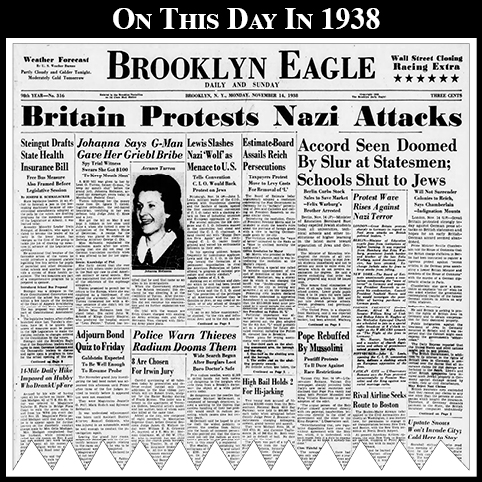 ON THIS DAY IN 1913, the Brooklyn Daily Eagle reported, “The Public Service Commission at its meeting today decided to amend the plans for the Montague street station of the new tunnel to Brooklyn, running from Court to Clinton street, so as to provide for an entrance with elevators at the Clinton street end of the station. This is a partial victory for residents of the Heights, who have been fighting to have the Commission establish a station entrance at Henry street, to bring it two blocks nearer the center of the Heights. The chief engineer was today ordered to make the necessary changes in this plan.”

ON THIS DAY IN 1938, the Eagle reported, “Berlin (AP) — Minister of Education Bernhard Rust today expelled Jewish students from all universities, technical schools and other institutions of higher learning in the latest move toward separation of Jews and Germans. The Minister of Education telegraphed the rectors of all universities ordering them to oust Jewish students immediately and not to permit any more to enter even for lectures which do not involve examination for degrees. He said a decree embodying that order was being prepared and would be issued soon. This means final elimination of Jews of all ages from the German school system. Lower grade pupils from 6 to 14 years old were taken from German schools in 1936 and put into Jewish private schools. Jewish professors had previously been ousted.”

ON THIS DAY IN 1944, the Eagle reported, “All Brooklyn members of the City Council except Mrs. Genevieve Earle, who declined to explain, today signed a resolution to be acted on at the next meeting to stamp the Council’s disapproval on any play or book written by Noel Coward, whose slur on Brooklyn boys in the armed forces is being hurled back at him a thousand-fold … In Washington, Representative Samuel Dickstein, Manhattan Democrat, announced he will ask Congress and the appropriate officials to prevent any further visits by Coward to the United States … Four Brooklyn boys who have fought through blazing fire and endless heat in the Southwest Pacific answered Noel Coward today. Stationed at the Brooklyn Naval Hospital, three marines recovering from wounds and a sailor recuperating from malaria spoke contemptuously of the actor’s lampooning ‘mournful little Brooklyn boys lying in tears’ in the hospital he visited. ‘He ought to volunteer to become a foreign correspondent so that he might see some of those Brooklyn boys in action,’ suggested Corp. Edward Mann of 704 Park Place.”

ON THIS DAY IN 1945, the Eagle reported, “Police prepared today to handle more than 20,000 persons in the vicinity of a stone-littered Bronx lot where 9-year-old Joseph Vitolo Jr. said the Virgin Mary had promised him ‘something wonderful’ would happen tonight when she appears to him for the 17th and final time. Police Inspector John Burke estimated fully 20,000 persons were at the lot, between Villa Ave. and the Grand Concourse and near Van Cortlandt Ave. East, last night. Many had mistakenly computed it as the night Joseph’s vision of the Virgin Mary had promised him, he said, that a well would appear on the stone ledge where the boy’s neighbors had erected a makeshift altar. The devout, many of them crippled, milled through the streets as Joseph prayed at an orange-crate altar between 7 and 8 p.m.”

ON THIS DAY IN 1948, the Eagle reported, “London, Nov. 13 (U.P.) — An empire paced the floor today, awaiting the birth of the prince or princess who will become second in line to its great throne. The baby, that of Princess Elizabeth and Prince Philip, Duke of Edinburgh, is expected this weekend. Buckingham Palace remained officially silent on the imminence of the birth, but the King and Queen canceled all weekend engagements and remained at the palace. The royal household was alerted and placed under the ‘command’ of Nurse Helen Rowe, the registered midwife who will attend the birth. Sir William Gilliatt, Elizabeth’s physician, was standing by, awaiting the summons to the palace to deliver the baby … British Broadcasting Corporation technicians stood by at the palace, ready to flash to the world the news that also will travel by telephone, cable, field gun and church bell.”