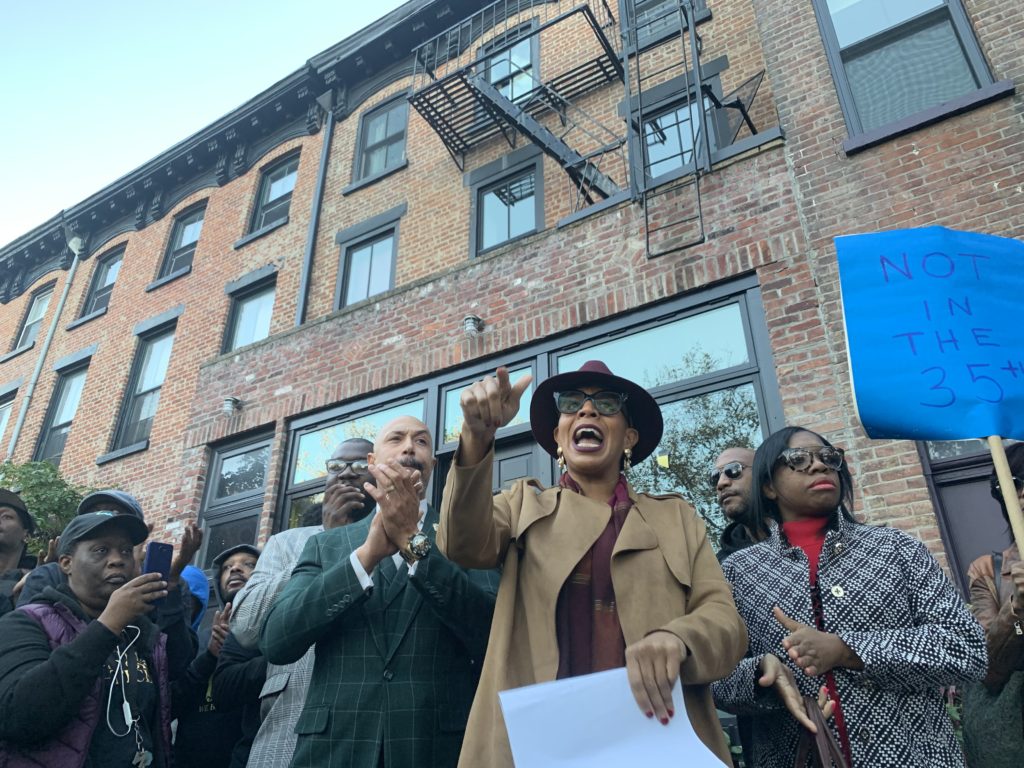 Councilmember Laurie Cumbo at a protest about racist Halloween imagery in Clnton Hill. Eagle photo by Noah Goldberg
Share this:

A Brooklyn woman resigned Friday from her job as co-director of a Bedford-Stuyvesant art studio just days after hanging Halloween decorations depicting what appeared to be black children hanging from nooses in the windows of her home across from a public elementary school.

The figures — hanging in the window of the Clinton Hill home belonging to ArtShack Brooklyn co-director Dany Rose — were installed for Halloween, and showed four people made of brown cardboard, two of them with nooses around their necks and another hanging upside-down with a rope tied to their leg. Rose’s home is directly across the street from elementary school P.S. 11.

Rose’s resignation comes just a day after protesters, politicians and civil rights advocates called for a boycott of ArtShack Thursday.

Rose’s resignation letter, posted to Instagram by ArtShack, does not mention the community outrage. “This organization has strong roots, and I will look forward to watching it grow and thrive in the future,” she wrote.

Chants of “shut it down” rang out on Thursday on Rose’s block as angry Clinton Hill and Bed-Stuy residents voiced their outrage over the decorations.

“ArtShack has got to go,” said Kirsten John Foy, a civil rights leader who has two sons enrolled at P.S. 11. “Not just right here on Waverly Avenue, but on Bedford Avenue too,” he said, referring to Artshack’s location on Bedford Avenue. “You have no place in our community espousing racism … You should feel thankful that this is the response you’re getting.”

More than 100 protesters gathered in the street and on the sidewalks outside Rose’s brick home on Waverly Avenue, where the remnants of the tape that held up the images were still on the windows.

In an Instagram post from the art studio’s page, Rose apologized, claiming the decorations were both a mistake and misunderstanding.

“The images were based on the horror movie Annabelle, but because they were made of brown kraft paper and hanging from nooses, they were deeply racially offensive,” Rose wrote. “I understand that ignorance is no excuse and apologies are not enough, but nonetheless I want to apologize sincerely to my neighbors and community.”

Rose said she took the display down after she was contacted by a parent from P.S. 11.

“I don’t think it was a mistake,” said Chenell Sheppard, who is black and has a 5-year-old son at P.S. 11. “Our school has both children of color and white children trying to learn next to each other. This also impacts the white kids who walk past it.”

A spokesperson for the city’s Department of Education told the Eagle, “The school community saw disturbing images and immediately reported them, and this issue is being resolved. Schools are safe havens, and there are school counselors available for any student or staff member who may need them.”

“I’m disappointed [my son] goes to school in New York City in 2019 and I have to explain to him at 5 what lynching is,” Sheppard said.