The Watchtower sign is getting replaced — but maybe not for good 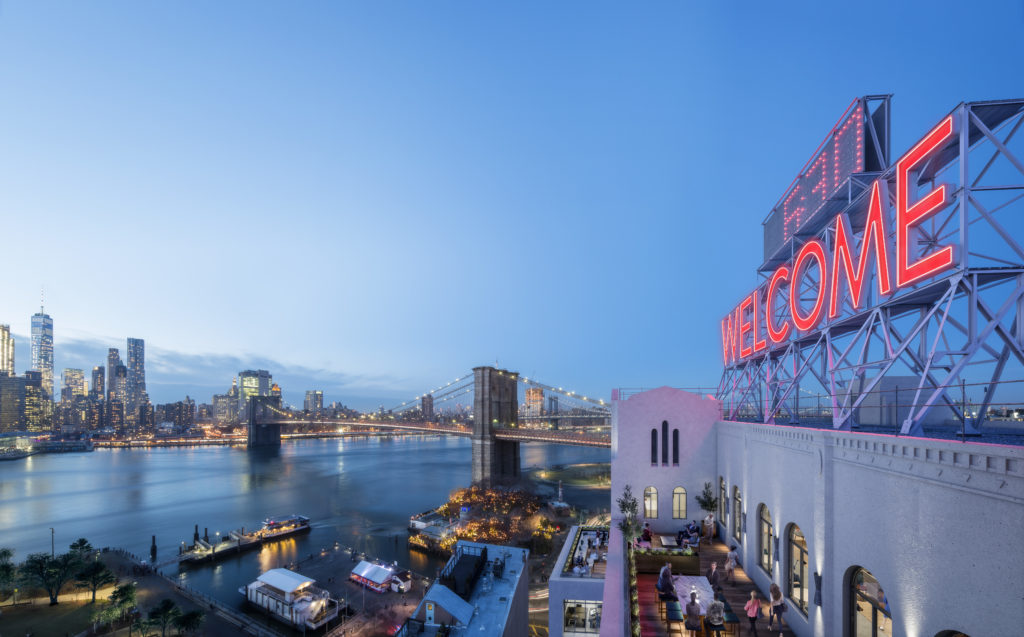 The owners of 30 Columbia Heights have decided to replace the iconic Watchtower sign with a “Welcome” sign — for now. Rendering courtesy of CIM Group/LIVWRK
Share this:

The void that Brooklyn Heights’ famous Watchtower sign left behind is going to be filled with a one-word message: “Welcome.”

The new red electric sign will be placed on the rooftop of Panorama at 30 Columbia Heights at the end of this month, the property owner announced on Friday. But keep an eye on the shiny “Welcome” sign. It might not be a permanent fixture of the Brooklyn skyline; it could be swapped out at any time and replaced with the name of a business that moves into Panorama.

Columbia Heights Associates, which is a joint venture of real estate firms CIM Group and LIVWRK, spent the past two years doing construction to turn the five-building former headquarters of the Jehovah’s Witnesses into a cutting-edge office campus. Even with the new sign moving forward, they are continuing to offer Panorama’s prospective tenants the option of having their name in the highly visible location, a spokesperson for Columbia Heights Associates confirmed to the Brooklyn Eagle.

“A Panorama flagship tenant will have the ability to replace the sign and use it as a major branding opportunity,” the spokesperson said.

“It would be an enormous asset for a tenant to have their name on the building,” Timothy King, managing partner of commercial real estate brokerage SVN | CPEX Real Estate, told the Eagle. A tenant that puts its name in lights on top of Panorama will obtain “an institutional branding you could almost say is invaluable,” King added.

Real estate-focused website New York YIMBY was the first media outlet to publish the news about the Welcome sign.

The religious group removed the Watchtower sign’s letters from the top of the building in December 2017 and put them in storage in upstate New York, where its world headquarters is now located. They left the sign’s framework intact and also left time and temperature signage on top of 30 Columbia Heights.

The Watchtower sign had lit up the skies over Brooklyn Heights since 1970. Before that, the previous owner of the property, E.R. Squibb & Sons, had its name on the lighted sign for several years.

Last year, the city Board of Standards and Appeals ruled that Columbia Heights Associates was allowed to replace the letters of the Watchtower sign.

The city Buildings Department unsuccessfully argued in hearings before the BSA that Squibb’s sign and the Watchtower’s sign hadn’t been legally erected and therefore Columbia Heights Associates didn’t have the right to have rooftop signage.