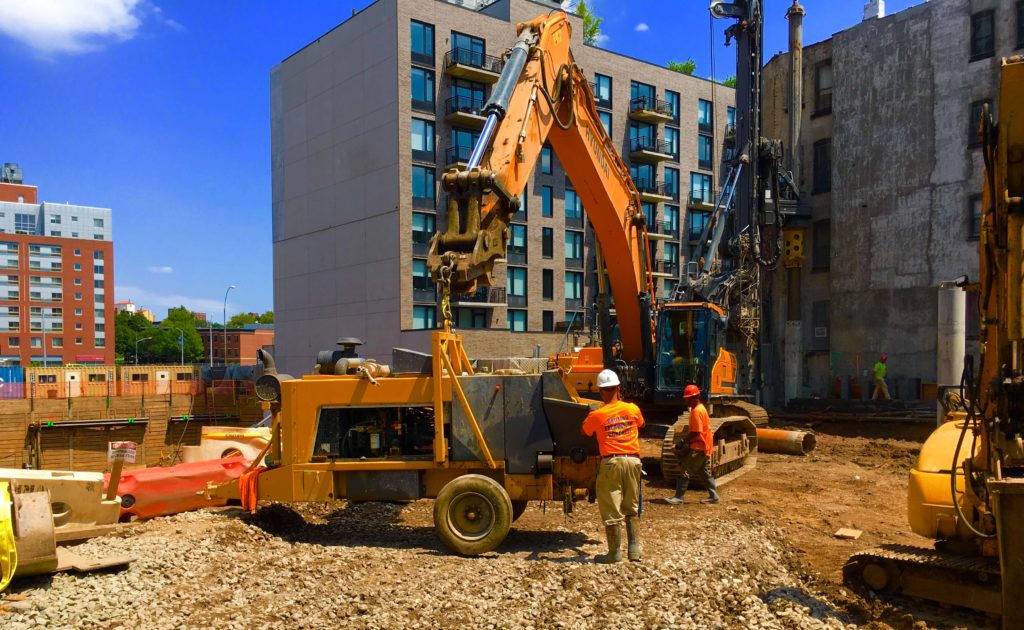 This is the Pacific Park site where an apartment tower and middle school are being built. Eagle photo by Lore Croghan
Share this:

Pacific Park’s new middle school will have more students than initially planned, adding to Prospect Heights residents’ worries about their kids safety as they go to and from school.

The public school will have 800 students, New York City School Construction Authority community liaison Tamar Smith said at a Pacific Park Quality of Life meeting on Tuesday night — up from an initial estimate of 640.

The school will be built at 664 Pacific St., just a block away from busy Barclays Center, the NYPD’s 78th Precinct Station and the FDNY Engine 219/Ladder 105 firehouse.

Drivers dropping off and picking up schoolchildren will find themselves vying for space on the streets with vehicles heading to and from the arena and the police and fire stations.

Smith said the occupancy date for Pacific Park’s middle school is expected to be September 2023. It had been 2022, she said.

The 2023 date is “anticipated” as opposed to “hard,” she said, because the School Construction Authority is building the middle school at the base of a private developer’s apartment tower. When the authority builds a stand-alone school, it has more control over the completion date.

The SCA is a public entity (separate from the Department of Education) that designs, builds and modernizes New York City schools.

Excavation and foundation work are ongoing at the 664 Pacific St. site and will continue through the end of this year, Pacific Park project manager Tobi Jaiyesimi said at the meeting.

In addition to classrooms, the school will have amenities including an art room, a music room, a library, science labs and project rooms, two gyms and a cafeteria, Smith said. There will be a large outdoor play area on an upstairs terrace and a small outdoor playground on ground level.

For the most part, middle schools don’t have bus service, she said. There will be no onsite parking spaces for teachers.

“It’s a tough place to put a school” because of the combined proximity of Barclays Center, the police station and the fire station, Robert Puca, a member of the North Prospect Heights Association, told Smith at the meeting.

“We open schools in neighborhoods across the city, including some of the most congested, probably in the world — in Manhattan, in Queens, in the Bronx, in every borough and every corner,” Smith said. “And we do always take safety into consideration. In fact, the safety of the kids is one of our top priorities.

“However, when you need a school in a community … we do our best to site a school in the spot where kids are.”

And a dense population of kids and families means there’s dense traffic, she said.

The school at Pacific Park was originally going to be located at another site in the 22-acre mega-development, which was originally called Atlantic Yards.

“There are huge safety issues,” Weinstein told the Brooklyn Eagle after the meeting. “Eight hundred kids are going to dump onto Sixth Avenue. It’s insanity to put a school there.”

After the hearing, Puca told the Eagle he wouldn’t want his child to attend school at that location because of the danger to pedestrians.

“This is a recipe for disaster,” he said. “When that first accident happens, it’s going to be a nightmare for the community.”

The exterior design for the apartment tower and school at Pacific Park’s Site B15 was first revealed in December 2015. Marvel Architects designed the 26-story market-rate rental apartment building.

As the Brooklyn Eagle reported at that time, the school will occupy 100,000 square feet of the building, on five floors of above-ground space and two floors in the basement.

The Brodsky Organization is the developer of the building.