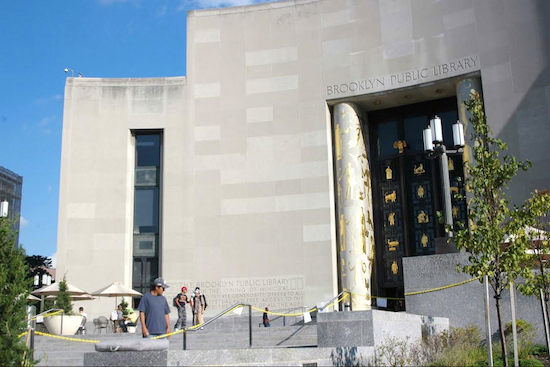 The city’s three public library systems — Brooklyn, Queens and New York — say that they need an additional $35 million in the upcoming budget. Instead, they are facing $11 million in cuts.

At a rally before Tuesday’s City Council budget hearing, library and city officials warned that a reduction in funding would lead to a loss of weekend service, fewer books, reduced programming and delayed repairs.

As one of the last great public institutions providing services to all, advocates also warned that democracy itself would take a hit.

“Our city’s public library systems need more funding to keep up with rising costs and demands,” said Councilmember Jimmy Van Bramer, chairperson of the Cultural Affairs and Libraries Committee. He called the cuts “undemocratic” at a time of such great need. “Libraries are where democracy thrives.”

Lack of library funding may indeed hit New York State in the pocketbook in years to come. For the first time in history, the U.S. Census Bureau will administer the census online. Libraries are expected to play a major role in helping people participate — they just won’t be receiving any extra funds to do the job.

This will “compromise [the library’s] ability to help New Yorkers during the census period or compromise other services,” David Woloch, Brooklyn Public Library’s executive vice president of external affairs, told the Brooklyn Eagle.

2020 Census participation is expected to be especially tricky

After the Trump administration added a citizenship question to next year’s census, the number of immigrants concerned that the bureau will share their data with law enforcement is expected to reduce the number of census respondents.

More than half of the people in Brooklyn, the Bronx and Queens live in neighborhoods classified as “hard to count,” according to CUNY’s HTC 2020 data map. In many census tracts in Brooklyn, fewer than 60 percent of residents even returned their census forms in 2010.

On top of this, a lack of federal funding has caused the Census Bureau to cancel field tests and delay cybersecurity assessments. Mistrust of the system is raising concerns about the government’s ability to keep respondents’ data private.

The U.S. General Accounting Office says it considers the census to be at “high risk” for failure.

“Without immediate, significant investment in complete count efforts, we stand to lose power in Washington and billions in federal funding over the next decade,” Mike Neppl, director of government relations for the New York Library Association said in a statement in December.

Libraries across the city say they need much more money for increased programming and to repair leaking roofs, broken air conditioners and other long-delayed maintenance.

The average NYC library is more than 60 years old. In Brooklyn, 18 library buildings are over 100 years old and many need serious upgrades.

“We need this funding to continue to accommodate the service levels we provide now — as costs continue to rise, we get asked to provide more and more services and we continue to expand our reach, including new branches like Adams Street and larger branches like Greenpoint,” Woloch said.

The de Blasio administration proposed what appears to be a slight cut — $387.1 million for the city’s libraries for 2020, slightly down from the $387.7 million in the Fiscal 2019 Adopted Budget. But what was proposed last year wasn’t actually adopted, advocates said, resulting in the $11 million in cuts.

“As of now we are slated to lose about $3 million in funding compared to last year, Woloch said. “If these reductions go forward we would expect to reduce collections, staffing and hours of service.”

“The three library systems asked for a regular annual funding stream to be included in the 10 year plan – and we did not receive it. This constrains our ability to plan capital projects, fund shortfalls, and address many of the outstanding infrastructure problems we face. Accordingly, we are now asking for $150 million in capital funding this year,” Woloch said. That breaks down to $50 million for each system.