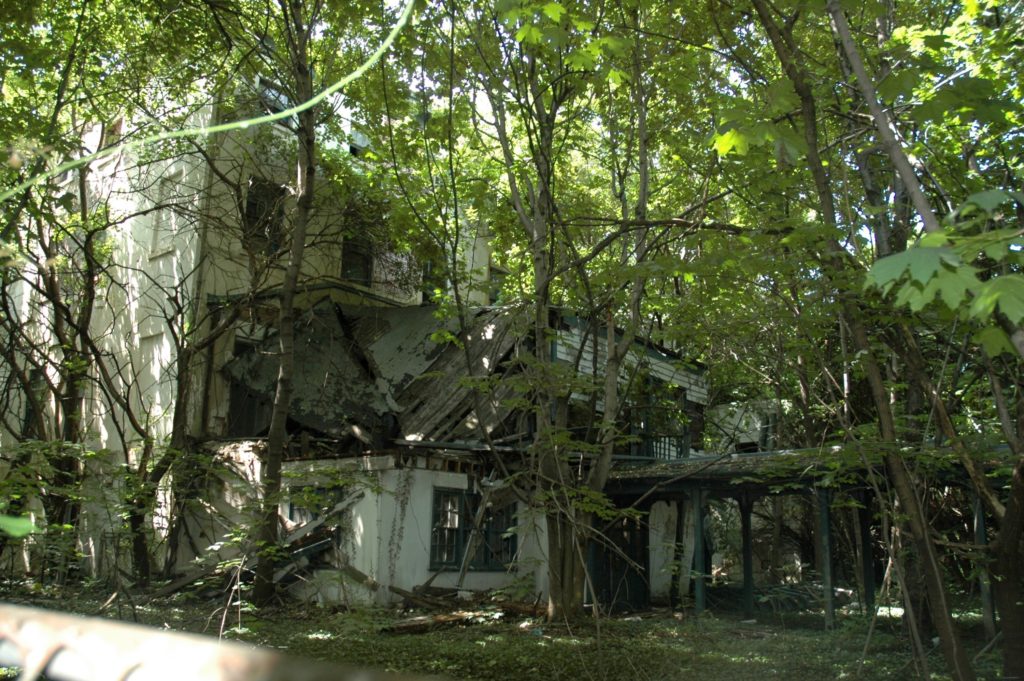 Their grandeur is evident despite caved-in roofs and rubble-strewn yards where trees grow jungle-wild.

Admiral’s Row homes in the Brooklyn Navy Yard were imbued with eerie beauty even when they were vacant and uncared for, a trove of 2005 Brooklyn Eagle photos reveals.

We pulled the pictures of the high-ranking Naval officers’ former homes out of our archives after getting word earlier this week that Wegmans Food Market will open on Oct. 27.

The much anticipated grocery store will occupy 74,000 square feet of mixed-use space in Building 212, which is under construction on a site where most of the Admiral’s Row houses have been torn down.

The now departed historic homes stood on Flushing Avenue. There’s still one left — Quarters B, which was constructed around 1872.

There are plans to preserve it and also to reconstruct a pre-Civil War building called the Timber Shed that was used to store ship masts back in the day.

Some of the Admiral’s Row homes were flat-out falling apart in 2005 when Sarah Ryley, who was then an Eagle reporter, snapped a series of photos.

A carpet of brick rubble surrounds an open archway of a decrepit house in one picture.

The Admiral’s Row houses were constructed between the 1860s and 1901. They have been vacant for four decades.

Another photo shows a squalid interior of a building with a nearly destroyed roof and broken windows.

But remnants of the genteel past remained at Admiral’s Row, the photos reveal.

A sternly worded sign on a weathered shed spells out the rules of etiquette for using a tennis court on the property.

“Normal tennis court courtesies will be observed at all times,” it says.

One house in the photos has a lovely trellis, half-choked by ivy, outside its entrance.

The grand houses were “soaked and rotted,” and renovating them was “not economically viable,” Andrew Kimball, then-president and CEO of the Brooklyn Navy Yard, said in a 2008 Eagle story by another writer, Amy Crawford.

The United States Navy operated the Brooklyn Navy Yard from 1801 to 1966. Francis Morrone’s “Architectural Guidebook to Brooklyn” says more than 100 ships were built there for the War of 1812.

The USS Arizona, destroyed in the 1941 Japanese attack on Pearl Harbor, had been built at the Brooklyn Navy Yard. In 1944, during the height of World War II, there were around 70,000 workers at the Navy Yard.