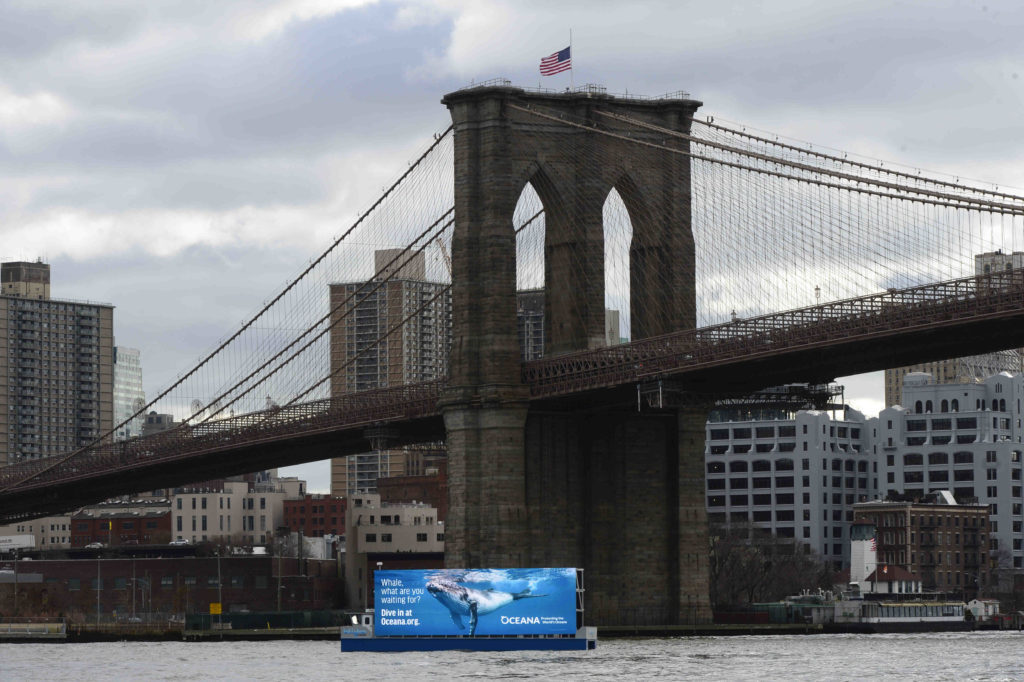 Update (3/27 at 11 a.m.): Mayor Bill de Blasio’s administration filed a suit against Ballyhoo Media in Manhattan Federal Court on Wednesday morning, seeking to ban the company from displaying advertising on any boat in the city’s waterways, according to The City. Ballyhoo failed to cease its unlawful operations, despite notification from the city’s Law Department, according to the mayor’s office.

Two city politicians are trying to stop a 60-foot-wide advertising barge operated by Ballyhoo Media from making its journey up and down the East River.

A bill slated for introduction on Thursday by Councilmembers Justin Brannan and Mark Levine would slap a $100,000 fine on Ballyhoo and other barge businesses — more than quadruple the current fine of $25,000 — for violating city zoning rules.

The boat and its 20-foot high, double-sided screen can be clearly seen from several roadways, including the BQE, Belt Parkway, FDR Drive and West Side Highway.

Politicians argue that the maximum fines, as they currently stand, pale in comparison to the profits earned by these companies and do nothing to deter the businesses from operating their floating ads.

“Not one constituent has come to me and said they’re going to Shore Road Park so they can see a billboard in the harbor.”

“Pricing of a 30-second spot in a two-minute loop on the boats is $55,000 in NYC,” a spokesperson for Pivot Media Ventures, a Ballyhoo affiliate, told Digiday.

Besides being a distraction to drivers on major highways, Brooklyn politicians say constituents are complaining.

“Often there are two points of view to an issue,” Brannan told the Brooklyn Eagle. “With these floating monstrosities, though, not one constituent has come to me and said they’re going to Shore Road Park so they can see a billboard in the harbor.

“What I have heard from just about everybody, though, is that they are ugly and actually pretty dangerous because they distract drivers on the Belt Parkway.”

Zachary Carter, corporation counsel for the New York City Law Department, sent a letter on Jan. 1 to Adam Shapiro, CEO and president of Ballyhoo, alerting him that he was breaking the law.

“There is sufficient cause to believe that Ballyhoo’s operations in New York City violate the Zoning Resolution,” Carter wrote. “Therefore, we are writing to provide Ballyhoo with an opportunity to demonstrate, no later than Jan. 16, 2019, how it intends to comply.”

Senior counsel Brian T. Horan, who co-signed the letter with Carter, did not respond to a request for comment asking how Ballyhoo replied or if the NYPD had levied any fines against the the Miami-based business.

At the time, Shapiro denied that his company was breaking any laws, and his barge has continued to roam the waters ever since. “Ballyhoo Media is legally operating based on all current zoning resolutions,” he told the Eagle. “We plan to work with the city to resolve the matter shortly.”

The vessel, which Levine labeled an “obnoxious eyesore,” has been seen traveling down the Brooklyn waterfront on the East River from Greenpoint to Bay Ridge, as well as along the Hudson River. Advertisers have included the Brooklyn Nets, Heineken and “The Grinch.”

“A majority of my district runs along the waterfront, and I hear firsthand from constituents about the negative impact these floating TV billboards have on the surrounding community,” Councilmember Stephen Levin, who cosponsored the bill, told the Eagle.

“The law is clear: These barges are in direct violation of NYC’s code, but they continue to flout regulation because their profits are so high. We need to increase fines to hold them accountable and bring needed relief to New Yorkers.”