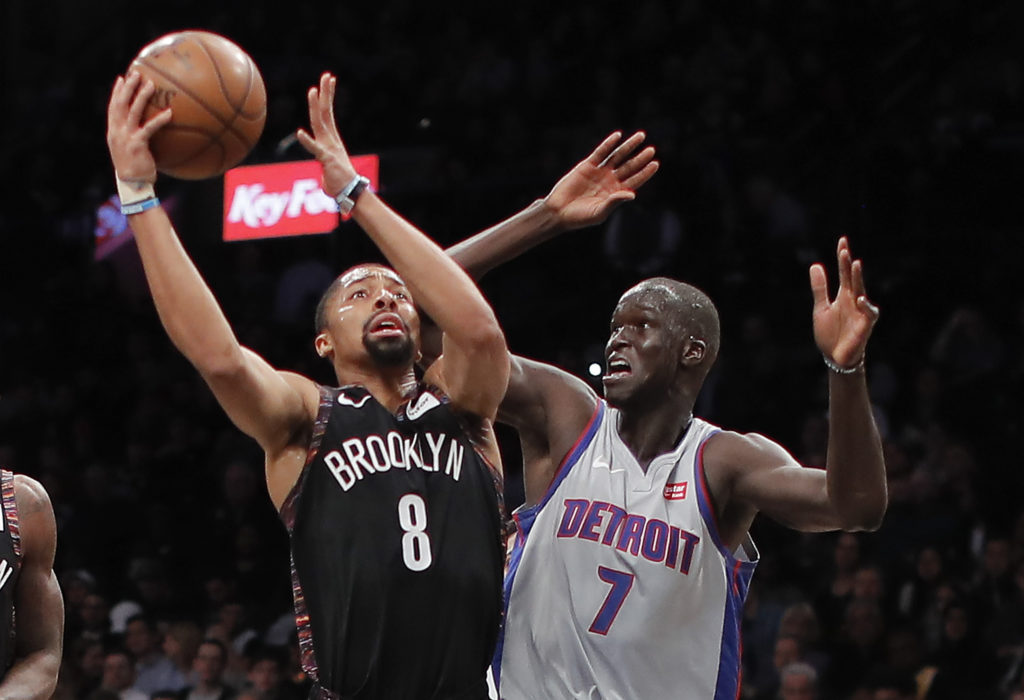 Spencer Dinwiddie and the rest of the Brooklyn Nets prepared for their seven-game road trip by dominating the Detroit Pistons from start to finish in their key Eastern Conference showdown Monday night at Barclays Center. AP Photo/Julie Jacobson

Spencer Dinwiddie admitted that he’d need to pack “a suitcase and a half” for the Nets’ upcoming seven-game road trip through three time zones.

Joe Harris added that he simply had to “empty his entire closet” for the elongated trek that will keep the team away from Brooklyn for almost three weeks.

Fortunately, Dinwiddie, Harris and the rest of their teammates will also be toting a four-game winning streak into the most challenging stretch of their turnaround season here in Downtown Brooklyn.

Dinwiddie poured in 19 points off the bench on Monday night to lead seven Nets players in double figures as Brooklyn bullied the visiting Detroit Pistons, 103-75, in front of a playoff-hungry, sellout crowd of 17,732 fans at the Barclays Center.

Knowing they needed a win to hold a potential tiebreaker over the Pistons in case both squads finished with the same record, the Nets (36-33) made Detroit look more like a team playing out the string on a lost season.

“They brought a tough mindset and a much more physical game,” admitted Pistons star Blake Griffin after being limited to 10 points on 1-of-10 shooting by a Nets defense that held Detroit to its lowest point total of the season.

Dinwiddie, who already holds the team record for most points off the bench (904) in a single season, was part of a collective team effort that thwarted the Pistons at virtually every turn during a game that boasted a “playoff atmosphere” but instead turned into a rout, with Brooklyn running out to a 26-point lead at halftime.

Rookie sensation Rodions Kurucs continued his strong all-around play in his new role as the Nets’ starting power forward, scoring 13 points – all in the first half – and picking up three steals, each of which resulted in a thunderous dunk on the other end of the floor.

Previously struggling sharp-shooter Allen Crabbe enjoyed a bounce-back performance with 14 points, knocking down 4-of-6 shots from 3-point range. Harris and Caris LeVert each had 12 points and Jarrett Allen and D’Angelo Russell chipped in 11 apiece for Brooklyn, which ended Detroit’s five-game win streak.

The victory didn’t just boost the Nets over the Pistons by a half game for the Eastern Conference’s No. 6 seed, it also gave Brooklyn some much-needed confidence heading into its daunting trek that begins Wednesday night in Oklahoma City and won’t end until March 28 in Philadelphia.

“Our guys attacked it,” noted Nets head coach Kenny Atkinson. “Sometimes when you’re not used to these big games, quote unquote, you might be on your heels a little, but I felt like we were the more aggressive team.

“That kind of says we weren’t afraid of the moment, that’s for sure,” he added. “I like how we attacked it. I like how we were the more aggressive team. Definitely a good sign for us if we have more of these games in the future.”

And they certainly will.

The only non-contending team on the list of seven opponents will be LeBron James and the Los Angeles Lakers, not exactly a walk in the park for a Brooklyn team that hasn’t spent more than four consecutive games away from the corners of Atlantic and Flatbush avenues this season.

While they got busy packing immediately after the statement win, the Nets didn’t forget to send a shout-out to their fans, who packed Barclays Center to the rafters Monday in what will be their last look at this playoff-hopeful team until March 30.

“I think our fans were amazing out there,” said Russell. “They kept the energy alive. We heard them. We felt it for sure.”