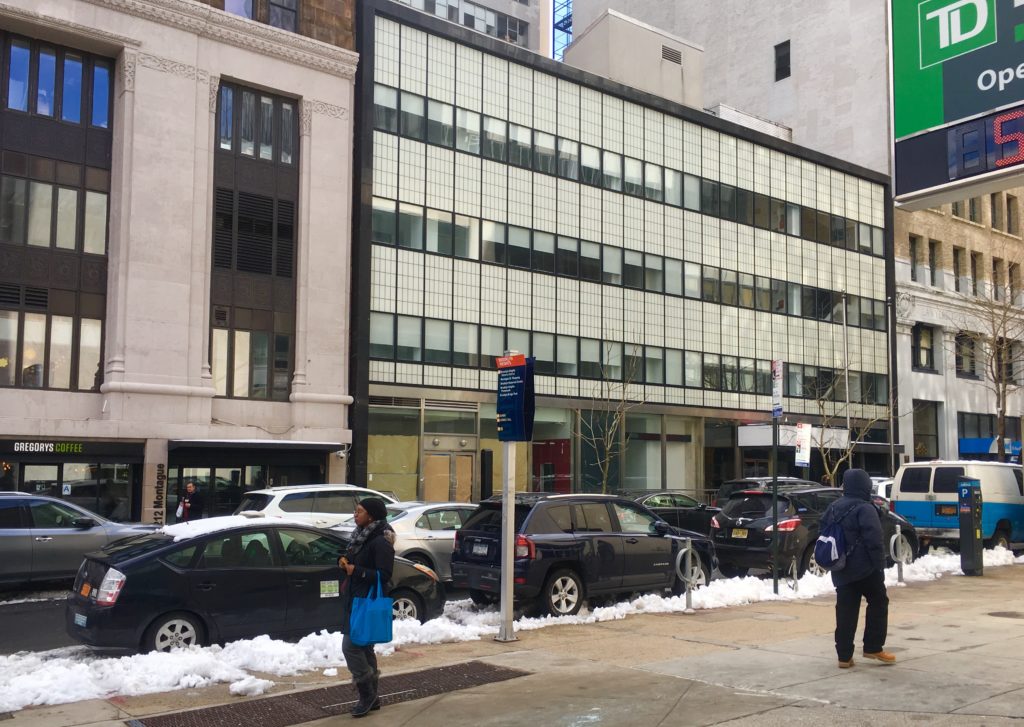 The second building from the left is 200 Montague St., a Modern-style landmark. Eagle photo by Lore Croghan
Share this:

Recently, the Landmarks Preservation Commission was presented with a proposal to demolish the 1959 bank building at 200 Montague St. and replace it with a new building. 200 Montague Street is a low-rise International Style structure, designed by Phillip Birnbaum, a prolific New York-based architect, whose façade was altered prior to its designation in 2011 as part of the Borough Hall Skyscraper Historic District.

The proposed replacement building, designed by Beyer Blinder Belle, a NYC-based firm noted for their preservation expertise, is much taller and its currently proposed façade draws stylistic influences from the late 19th- and early 20th-century commercial buildings in the area. Since the building is within the historic district, any alteration or development on the site requires LPC permission.

The thrust of the applicant’s argument for the proposal was that the existing 200 Montague St. building had been greatly altered from its original design, and the replacement building was more in keeping with the character of the surrounding historic district than the currently altered Modern building.

Essentially, they propose that the demolition of an altered building that is stylistically distinct from its neighbors in order to build something new is the most appropriate decision for the historic district. It is important to note the visual incongruity of the existing building with its neighbors, especially when contrasted with the proposed new development.

“To lose this building is to lose the opportunity to physically encounter history.”

Some public commenters have even questioned whether 200 Montague St. should be protected at all, as it is a Modern building in an area notable for its Classical Revival architecture. The common take on historic buildings is that they have to look “old,” which usually means Victorian, something with columns or something Charles Addams or Edward Gorey might draw.

People can have a hard time warming up to Modern buildings because they are so familiar, and familiarity breeds indifference, if not worse. Even though architecture has moved past Modernism as the dominant style, most new buildings are obvious descendants.

We live in a world built by Modernism and that blunts our perceptions with ubiquity. Even worse than being everywhere, Modernism is passé. “Vintage” or “ Historic” is special; “dated” is not. This has not helped the relative long-term fragility of modern building materials as opposed to traditional ones. Stone holds up to time and the elements better than glass and steel, and you can tell by looking.

Of course, the same can be — and was — said of Art Deco. In the 1960s, when the Landmarks Law was being written, liking Art Deco was regarded if not as apostasy, than at least peculiar in the extreme. Art Deco was considered old, fusty and gauche. It was thought to be showy, shallow and from your parent’s generation.

“It must not be brushed aside or Marie Kondo’d out of Brooklyn.”

Certain skyscrapers, like the Chrysler Building (1929) and the Empire State Building (1931), never fell entirely out of fashion — but even they were not designated as landmarks until 1978 and 1981, even though they were eligible for designation in 1965. With this kind of track record, is it any wonder that the 1959 Birnbaum building could be considered disposable?

However, 200 Montague St. was included in the historic district for more than just its aesthetics. As stated in the designation report:

“The city greatly increased its involvement in Downtown Brooklyn during the 1940s when the City Planning Commission — at the behest of Robert Moses and Borough President John Cashmore — developed a comprehensive Master Plan for the Brooklyn Civic Center and Downtown Area … An implicit goal of the master plan was to stimulate private investment in the area … In 1959-60 the Lafayette National Bank constructed a Modernist two-story building at 200 Montague Street designed by Philip Birnbaum.”

200 Montague St., altered as it may be, is a visible reminder of the city’s vision for Downtown Brooklyn in the mid-century. It’s a visitor from another time and a traveler from an unrealized future. It doesn’t fit in with its neighbors because it was built as something new, and its incongruity lends it significance.

Passing by the building, you notice its difference. You don’t need to know anything about architecture to see that it’s very different from the other buildings on the block. Awareness of that difference can spark questions about who built it and why. In that inquiry, you might learn about the development and communal history of the neighborhood, which can deepen your personal experience of the place by providing a context and contrast with the visceral actuality of being there.

To lose this building is to lose the opportunity to physically encounter history. It may not be a style which you like or even a history to be celebrated, but it happened. It exists and it must not be brushed aside or Marie Kondo’d out of Brooklyn.

Simeon Bankoff is the Executive Director of the Historic Districts Council, a position he has held since 2000. His work encompasses land use, zoning, affordable housing, and adaptive reuse, and, as a result, is at the forefront of New York City’s historic preservation movement.