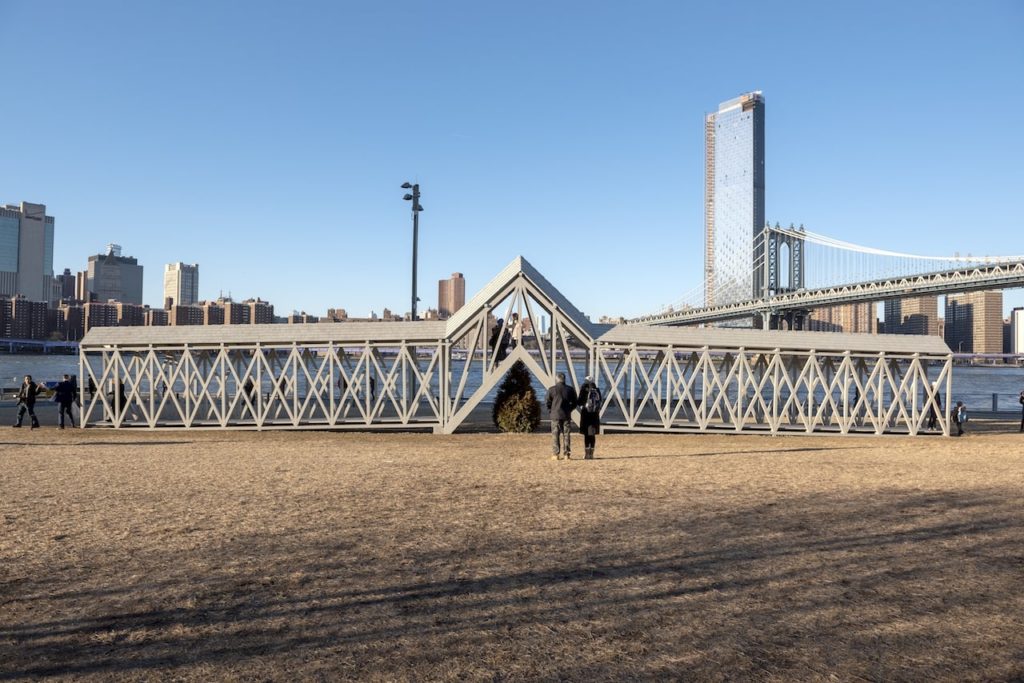 A tree grows in Brooklyn, and so too does a bridge.

Iranian artist Siah Armajani’s “Bridge Over Tree” is now on view at Brooklyn Bridge Park, marking the first time the installation has been staged since 1970.

The piece, commissioned by the Public Art Fund, coincides with the artist’s first major U.S. retrospective, opening at the Met Breuer on Wednesday and running through June 2. The sculpture is the sole outdoor component of the museum’s exhibition and will be on display through Sept. 29.

The artwork features a 91-foot-long walkway with a set of stairs that rise and fall over a single evergreen tree.

“Something Public Art Fund does a lot is commission artists to make new works, but we also have a strand in our program, which is more historical,” Nicholas Baume, director and chief curator of the organization, told the Brooklyn Eagle.

“There are occasions where we’re interested in contextualizing what is going on now with historical work,” he said. “Siah is still very much working today, but also has been a seminal figure in the development of public art.”

“Bridge Over Tree” is not the only historical overpass in the area — the artwork is located on the Empire Fulton Ferry Lawn between the Brooklyn and Manhattan bridges with the East River and the Manhattan skyline in the background.

“This nearly 50-year-old work is so fresh, so interesting, so before its time,” Baume said. “Just the poetry of this image of a bridge that goes nowhere, that has no function in a normal sense, but which is straddling a tree right in the middle of a lawn in between these two great bridges. It’s a very resonant and poetic image.”

“There are not many places in New York City where you can put a 90-foot-long sculpture,” he added. “The work looks amazing here; it’s really fortuitous. It’s almost as if it could have been conceived for this location.”

The versatile piece, which debuted in 1970 in Minnesota — where Armajani, 79, currently lives — is particularly pertinent in the modern era, Baume said, given the current political climate and rhetoric surrounding walls and borders.

“We’re having such a debate nationally, internationally about dividing people, about people belonging in one place and not the other, about seeing people as different and that they should be separated,” Baume said.

“The idea of a bridge is about creating relationships, creating connections, allowing for interactions and connection. On a philosophical level it carries resonance as a beautiful experience.”

The lone evergreen, Baume said, conveys the feeling of being alone — even when seemingly connected to the collective.

“There’s that sense of the irreducible nature of the individual, and the tree in some sense represents that, but also that idea of the individual being in dialogue, the idea of connection and of things coming together,” he said.

“There’s an interesting blend of the singular and the collective in this meeting of the solitary tree and the bridge that we’re invited to experience and walk through.”

In an era of social media and constant communication, Baume’s interpretation of the tree speaks to the timelessness of Armanjani’s piece, planting it firmly within the constructs of the 21st century — almost 50 years after its inception.

Public Art Fund has a history of bringing vibrant contemporary art to New York City through its free exhibitions. The nonprofit has installed pieces that complement and play off the surrounding urban environment.

The group has commissioned several prominent pieces in Brooklyn Bridge Park, including Erwin Wurm’s “Hot Dog Bus,” which debuted last June. Wurm’s installation featured a vintage Volkswagen Microbus that had been transformed into a bloated and bizarre-looking hot dog stand.

In May 2017, the organization brought Anish Kapoor’s “Descension,” a 26-foot-wide whirlpool, to Pier 1. A year earlier the group installed Martin Creed’s “Understanding,” a 25-foot-tall, rotating neon sculpture, at Pier 6.

“Bridge Over Tree” will be on display at Brooklyn Bridge Park’s Fulton Ferry Lawn from Feb. 20 through Sept. 29.