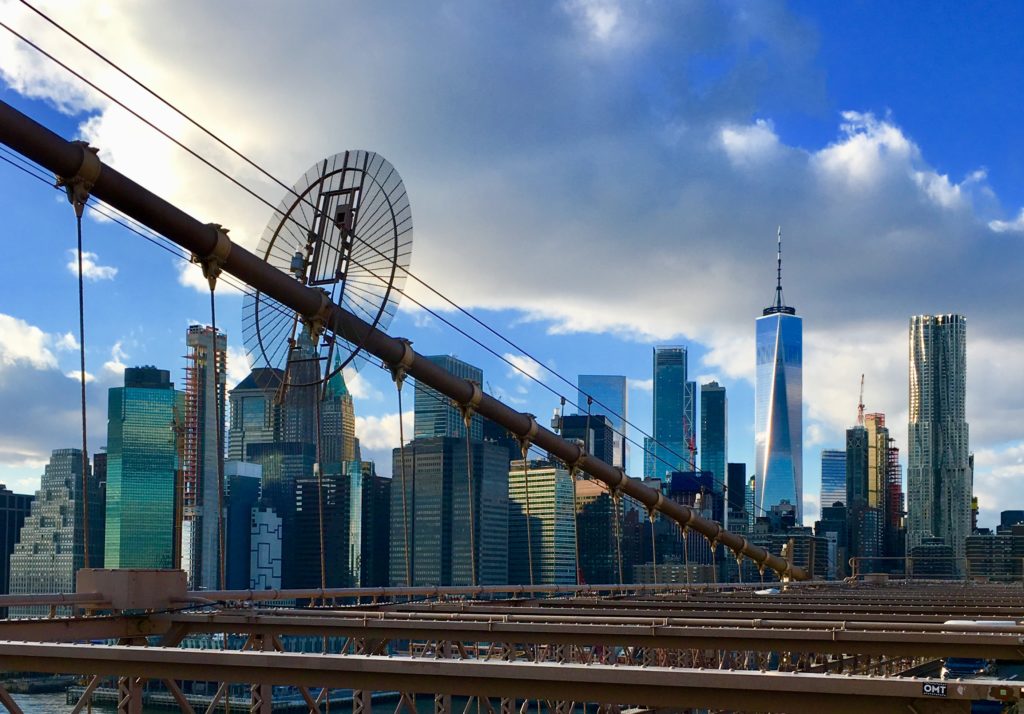 Brooklyn Bridge visitors get an epic view of the Manhattan skyline and the World Trade Center. Eagle photos by Lore Croghan
Share this:

You can walk across the Brooklyn Bridge again without fear of getting caught in a crush of humanity.

Now that Christmas and New Year’s vacationers have left our city, the walkway on the famous East River span is no longer dangerously crowded.

We strolled over the beloved bridge on sunny Sunday, Jan. 6. The temperature was a relatively mild 48 degrees. It was an ideal winter afternoon for bridge walking.

There were lots of people on the promenade that pedestrians and cyclists share — but plenty of breathing room.

As usual, numerous pedestrians ignored the markings on the bike lane and strolled and posed for photos on the cyclists’ side of the promenade.

The bikers we saw carefully and respectfully made their way around the folks on foot.

People smiled and had a great time.

The situation was scarily different back on Dec. 29, when the city was full of vacationers.

So many visitors crowded onto the Brooklyn Bridge that they wound up in a motionless mass for a good long while.

Police cut off pedestrian access to the bridge for a short time that day, Gothamist reported.

The photos folks tweeted from the normally scenic span were disturbing — with wall-to-wall people squeezed between the fence enclosing the promenade.

Fortunately, nobody panicked and started a stampede.

Horribly, that’s what happened in May 1883, the week after the Brooklyn Bridge opened.

A front-page article in the May 31, 1883 Brooklyn Daily Eagle tells the harrowing story of a stampede on the bridge that killed a dozen pedestrians. Hundreds more were injured.

We found the article in the Brooklyn Public Library’s online archives, which you can access through its Brooklyn Newsstand Portal.

The disaster occurred on Decoration Day — which is what Memorial Day was originally called.

In the 19th century, the focus of Decoration Day was graveside commemorations of dead Civil War soldiers.

According to the 1883 Eagle story, many pedestrians on the bridge during the disaster were returning home to Manhattan after visits to Brooklyn cemeteries.

The carnage began on a crowded staircase on the Manhattan side of the bridge. A woman holding a child fainted and fell, and a man fell on top of her.

People who couldn’t see what had happened “became panic stricken with the idea that the bridge had broken,” the story says.

Among the deceased was Margaret Sullivan, age 15, who “fell under the feet of the struggling throng and was taken out dead” because her father failed to save her, the Eagle story says.

He had handed over her younger sister Kate to somebody else, and Kate survived.

A surgeon at Chambers Street Hospital, where the dead were taken, said most apparently suffocated or succumbed to internal injuries.

Now, back to the present day.

The Brooklyn Bridge has been a city landmark since 1967.

It is the borough’s Number 1 tourist attraction.

It is arguably Brooklyn’s most beautiful structure.

As the first bridge to connect Brooklyn and Manhattan, its historic importance is huge.

Its granite towers’ Gothic arches are iconic and Instagram-worthy.

The 1.1-mile bridge needs to be a safe place for pedestrians and bike riders — every day of the year.

It needs to be safe even when crowds swell in late December because people from all over the world come to our city to celebrate New Year’s Eve.

Pedestrians need more room on the bridge. So do cyclists.

We’re ardently hoping the city decides to expand the bridge promenade, which would be a step in the right direction.

A city Department of Transportation report about the promenade published in December 2017 recommended a two-year inspection of bridge cables to figure out if they can bear the extra weight of a larger promenade.

A Transportation Department spokesperson cited in Gothamist’s story about the Dec. 29 bridge overcrowding said the inspection is expected to start this year. Should tourists pay to cross the Brooklyn Bridge?