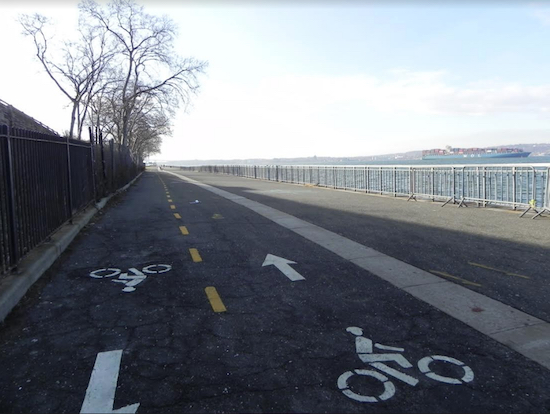 Following two "dooring" accidents, one of which was fatal, cyclist advocates are proposing a new safety measure for drivers. Eagle file photo by Paula Katinas
Share this:

In the Netherlands, it’s common practice when exiting a car to perform a twisting maneuver called the Dutch Reach. Transportation safety advocates on this side of the Atlantic Ocean are hoping it catches on here.

In the wake of two “dooring” crashes in Brooklyn, in which bike riders were struck by car doors flung open by drivers who didn’t look to see if anyone was coming, advocates are pushing the Dutch Reach as a way to reduce the risk of death and injury.

Here’s the Dutch Reach in a nutshell: Instead of using your near arm to open a car door, you use your opposite arm. That simple change of habit forces you to swivel your body and in doing so, you can look in the car’s mirror to see if a bicyclist is approaching. The maneuver was developed in the Netherlands decades ago and has become common practice in that country.

Michael L. Charney, a retired doctor who founded an organization called the Dutch Reach Project, said the act of having to reach across to open the car door reduces the chances that you will fling the door open in a hurry.

Dooring has become disturbingly common, according to Charney, an avid biker who lives in Cambridge, Massachusetts.

“I personally have not been physically injured by a dooring. But every week or so I have to evade, swerve, slow, shout, whatever to avoid a ‘near doored experience.’ And most every serious urban cyclist has a story to tell,” Charney told the Brooklyn Eagle in an email. “Since starting this effort many people have told me stories of their own doorings or of friends or family who have been injured, some seriously or with lifelong disabilities, physical or neurological.”

Transportation Alternatives, a leading safety cyclist and pedestrian advocacy organization in New York, has endorsed the Dutch Reach.
But the group’s leaders cautioned that it’s not a cure-all.

“It’s a great practice. But you are asking individuals to change their behavior, something that takes time. What the city really needs is more protected bike lanes,” Transportation Alternatives Communications Director Joe Cutrufo told the Eagle.

Protected bike lanes are designated areas on city streets separated from vehicular traffic by large barriers like planters or posts.

“It’s up to the city to make public policy to take spaces away from cars and install protected bike lanes. It’s up to individuals to keep a look out for people on bikes,” Cutrufo said.

Talk of the Dutch Reach has come about in the wake of two recent “dooring” crashes in Brooklyn.

On New Year’s Day, a 26-year-old bagel shop worker was killed while riding an electric bike on Third Avenue near 28th Street. He collided with the door of a parked taxi cab whose driver opened the door. The victim was knocked into the path of oncoming traffic and was struck by a 2013 Nissan driven by a 53-year-old man, police said.

Another “dooring” incident took place on Jan. 6 when a 57-year-old man riding his bike on Avenue I near East 2nd Street collided with the door of a parked car that had been opened at that same moment by the vehicle’s driver.

Protected bike lanes are the key to safety for bike riders, Cutrufo said. An estimated 86,000 New Yorkers commute to work or school on bikes. A DOT study found that one million residents ride a bike at least once a month.

New York has 6,000 miles of streets but only 118 miles of protected bike lanes, according to Transportation Alternatives.

Meanwhile, Charney isn’t giving up. He has written letters to Mayor Bill de Blasio, members of the City Council, the Department of Transportation (DOT) and the borough presidents, requesting that they endorse the Dutch Reach.

The Dutch Reach Project is pushing for a public awareness campaign that would include window decals, electronic traffic signs, stickers on parking meters and lessons in driver’s education classes.