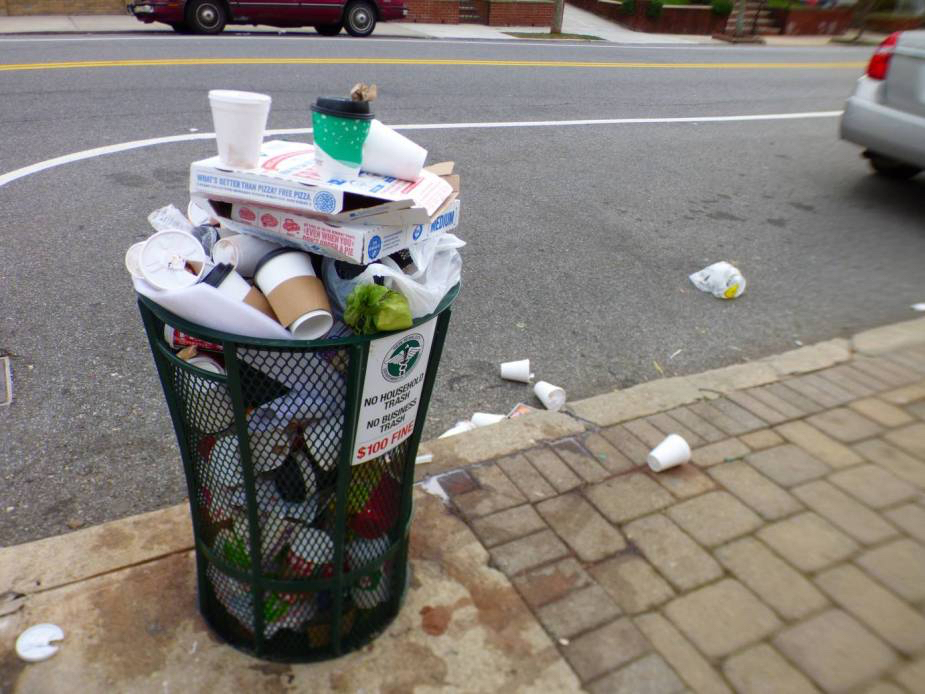 When the sun comes up and the tourists have gone home after seeing the Dyker Heights Christmas Lights Display, the streets of the neighborhood are filled with sights like this: an overflowing garbage cans. Photo by Tom Hilton
Share this:

Fight Back Bay Ridge is fighting back against garbage in Dyker Heights.

Leaders of the grassroots organization have stepped up to volunteer to fan put across their neighboring community of Dyker Heights over the next two weekends to pick up trash tossed by tourists who come to view the famous Dyker Heights Christmas lights display.

Sally McMahon, co-founder of Fight Back Bay Ridge, said group member Stephen Pickering came up with the idea for the garbage cleanup and that other members enthusiastically signed up for the mission.

“I remember bringing my children to see the Dyker lights when they were young and how delighted they were. It was a family tradition. It’s grown tremendously and has now brought problems for the homeowners and the neighborhood. So many people are not picking up after themselves. The trash is becoming overwhelming,” McMahon told the Brooklyn Eagle in an email.

“While planning to visit the Dyker lights for the first time with my family, I came across some articles describing the sanitation challenges faced by the residents. Why not grab a trash bag and help out our neighbors while enjoying the festivities? So I pitched it at a FBBR meeting and there was a really enthusiastic response,” Pickering said.

“Fight Back Bay Ridge is collaborative action group and we are working towards community organizing and civic engagement for the betterment of our neighborhood. So we decided to help out our neighbors,” McMahon said. “We organized a clean up at Dyker Lights to support the homeowners who work so hard to make the neighborhood beautiful. They shouldn’t have to clean up after tourists on their own. They bring joy to so many people and this is our way of giving back.”

In recent weeks, Dyker Heights residents have complained to local officials about overflowing trash cans and litter on the sidewalks and streets. Along with the tourists, vendors descend into the neighborhood to sell ice cream, candy, hot chocolate and other treats from their food trucks. People purchase food items from vendors and then toss the containers on the sidewalks when they are done, residents said.

Thousands of people visit the neighborhood every year during the holiday season to view the spectacular Christmas lights and figures homeowners display on their front lawns.

The Fight Back Bay Ridge cleanup comes on the heels of Councilmember Justin Brannan’s effort to convince the Department of Sanitation to place more trash cans on the sidewalks and to conduct more frequent collections of trash from the cans.

Brannan, a Democrat who represents Dyker Heights, Bay Ridge and parts of Bensonhurst, said he’s delighted that Fight Back Bay Ridge is pitching in.

“This is just another example of the long tradition we have in Bay Ridge and Dyker Heights of civic minded groups and individuals helping their neighbors for the betterment of our community,” Brannan told the Eagle.

Brannan urged others to “give them a hand and pick up any stray litter they might encounter.”