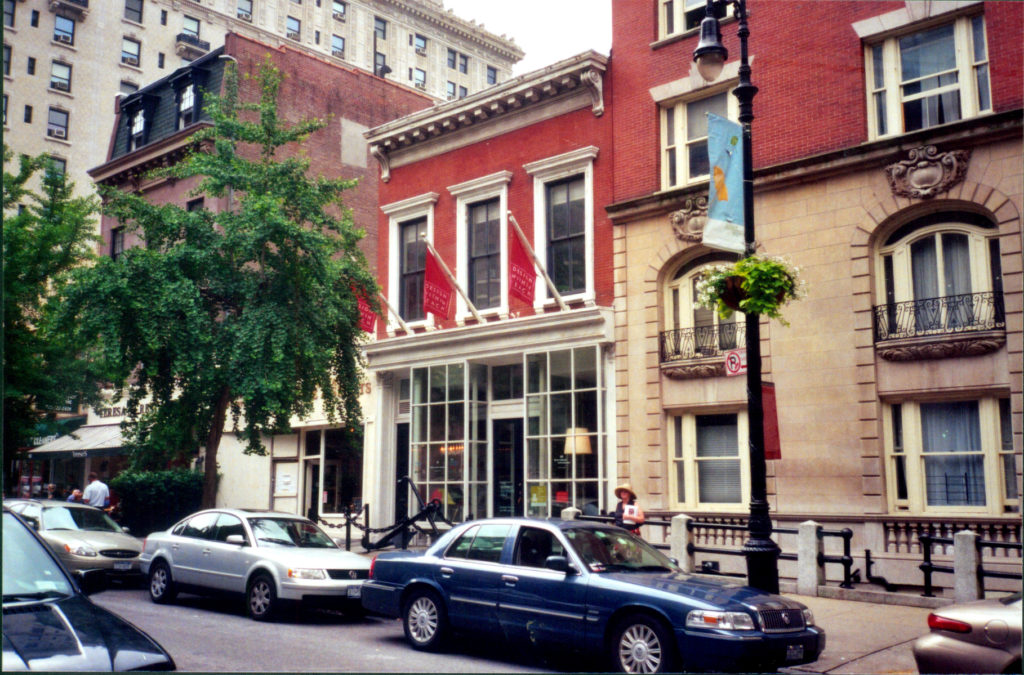 The new home of the popular Brooklyn Cat Café, at 76 Montague St. in Brooklyn Heights, will be ready for its soft opening this Friday. Here it is as it appeared in 2010. Eagle photo by Henrick Krogius
Share this:

It’s going to be a verrry soft opening.

The adorable Brooklyn Cat Cafe is getting ready for a soft (and fluffy) opening at its new Montague Street home at noon on Saturday, Dec. 8.

Their former cafe on Atlantic Avenue (see video of the action here) is shuttered and the kitties are helping to pack for the move to the much bigger space, formerly the Friend of a Farmer restaurant at 76 Montague St., between Montague Terrace and Hicks Street.

The non-profit Cat Cafe is a place to have a snack, play board games and relax surrounded by adoptable rescue cats. It’s the only cafe in the city run by a non-profit animal rescue organization, Brooklyn Bridge Animal Welfare Coalition (BBAWC).

“We’ll initially be feeling out the new space,” Rachel Foster, who helps run the cat cafe with Executive Director Anne Levin and Manager Julia Rosenfeld, told the Brooklyn Heights Press on Tuesday. Workers and volunteers are putting the finishing touches on the interior, which has retained the Vermont farmhouse look designed by the restaurant’s previous tenant.

The cafe is operated by cat-loving volunteers and rescuers who take shifts, Foster said. In this way, income from the cafe (visitors pay $7 for a half hour) goes directly for cat medicine and care, food, and rent.

“People come into to relax and have fun with the cats and kitten. It’s a harmonious and positive space in a time of polarization,” she said.

“Cats make people feel calm. People come in for a variety of reasons — to celebrate occasions, to grieve losses, even as a first dates activity. They often bring kids.”

The cats are all “super friendly,” she added, and they’re all up for adoption — except for Newt, the cafe’s mascot.

After two-and-a-half successful years on Atlantic Avenue, the cafe is broadening its mission, Foster said. The larger space will have more room for events and programs, like birthday parties and cats-to-mats yoga.

“We’ll have a lot more community programming -working with children and seniors, and education around animal rescue and care,” she said. “We’re really want to continue to partner with the community.” The café also will be a great resource for the community, as volunteers there “do a huge number of referrals of cafe visitors to the local community, like where to eat and what to do.”

Until the group obtains their food license, however, patrons will make due with pre-packaged snacks and drinks.

“That’s one reason why we’re having the formal launch in the new year,” she said. “We have to put a few pieces in place still.”

The cat cafe concept has been amazingly successful. Roughly 950 cat adoptions took place at the former cafe on Atlantic Avenue, and there were more than 50,000 visits, Foster said. “We hope to expand that.”

The all-volunteer structure and increased programming should go a long way towards paying the Montague Street rent. The 2,321-foot ground floor space in the building, owned by Jim Daniels and Harvey Elgart (who also owns Cobble Hill Cinemas), was running about $125 per square foot in 2014. A nearby space at 150 Montague St. is currently asking roughly $154 per square foot for rent for the first floor and $51 for the second floor.

“It will be a challenge; we’ll have to get grants, use the back space to generate income and we’ll sell merchandise, and throw parties – all for the benefit of the rescue operation” Foster said.

Locals may recall that a historic ship’s anchor sat for decades in front of the site. It was placed there in 1981 when Heights resident Wolf Spille bought the building and ran his ship brokerage firm from that address. The anchor was removed in 2015 and is being stored by Spille pending its possible installation elsewhere in Brooklyn Heights.

Invested in Brooklyn, Celebrated for Work in Human Trafficking

“We are all really invested in the Brooklyn community and beyond,” she said.

Foster and her husband Alain Kodsi opened the first ground up domestic violence shelter in the country where battered women are allowed to bring their pets.

“We’re very invested in animal-human connection and the impact of these relationships.”

Foster is the Managing Director of the New Abolitionists, an anti-trafficking project, as well as being a co-founder of World Without Exploitation a national anti-trafficking coalition. She has been an advocate at the Tompkins County Task Force for Battered Women and Sanctuary for Families and an attorney and board officer at Brooklyn Legal Services. In 2012 she received the New Yorkers Who Make a Difference Award from United Neighborhood Houses for her work representing disenfranchised New Yorkers.

Coalition Against Trafficking in Women is honoring Foster and her husband on Dec. 10 for their outstanding commitment to justice and equality for women and girls in New York and beyond.