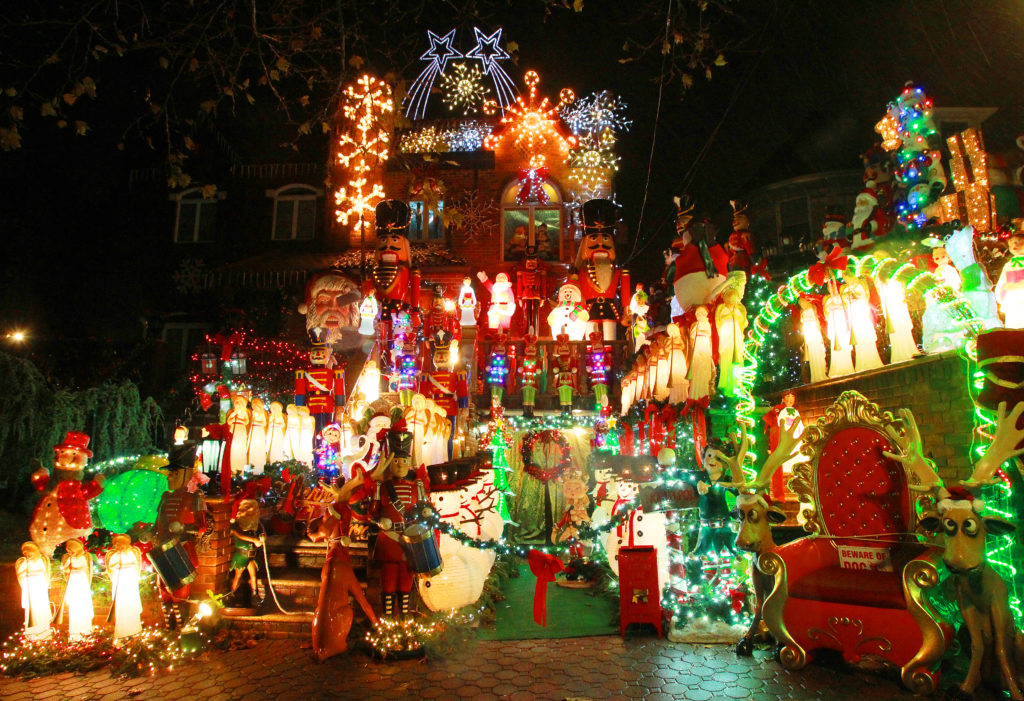 The houses in Dyker Heights are already alight for the holidays. Photos by Steve Solomonson
Share this:

All is merry and bright and ahead of schedule in Dyker Heights.

The small south Brooklyn nabe — lauded as “Con Ed’s warmest heartthrob” and the “undisputed capital of Christmas pageantry” by the New York Times — has begun to deck its halls with this season’s round of larger-than-life holiday displays that, neighbors say, only get bigger and brighter each year.

According to local resident Renea Gargiulo, lights – which typically make their debut Thanksgiving weekend – were starting to be hung this year as early as mid-November.

“Everyone started decorating early in the main area,” said Gargiulo, who started the Dyker Heights Christmas Lights Facebook page “on a whim” five years ago. “The rest of the houses should be lit by Dec. 1.” A yearly staple since sometime in the late ‘80s – though no residents are really sure of when the lights sparked such a buzz – the decorative, dazzling and sometimes over-the-top lights recruit visitors from neighboring communities along with travelers from other states and even countries (some of them even utilizing ticketed tour buses).

Many of those admirers keep up with the festivities via Gargiulo’s page, which as of this season has more than 17,000 followers.

“It’s been doing phenomenal,” said the Dyker native of the Facebook page. “I keep getting more and more people liking the page from around the world. They always have great things to say after they’ve visited.”

Since its creation half a decade ago, Gargiulo said, her page has become a go-to for information and live-time updates on the annual event. She said she most often has to reiterate to out-of-towners that Dyker Heights is just your regular neighborhood.

“They think it’s an amusement park with admission and that there are bathrooms,” she laughed, “so it’s just a constant updating of information.” Gargiulo stressed that her intention with the page is to “support the community at large.”

“I don’t make any money for running this page,” she went on. “It’s not a business for me. It’s just something that I do in my spare time because I love the tradition so much.”

Gargiulo isn’t alone. The tried-and-true tradition draws packed-to-the-gills crowds each year. However, as can be expected, the growing displays do come with their fair share of criticism – much of it sparked by the congestion.

To address concerns, the Dyker Heights Civic Association (DHCA) has partnered with the New York City Police Department (and, most notably, the 68th Precinct) to come up with a detailed safety plan that includes traffic enforcement to keep the tour buses and private cars moving as well as enforcement by the New York City Department of Health to crack down on unlicensed vendors selling cider and hot chocolate on the streets.

Working with Community Board 10 District Manager Josephine Beckmann, DHCA President Fran Vella-Marrone is also seeking a crackdown on homeowners who lease space in their driveways to the food vendors in violation of city health regulations. In previous years, the proliferation of food vendors has led to a sharp increase in litter on local streets, according to Vella-Marrone, who has made it clear that she – and the partnering civic groups – are in no way against the holiday spectacle.

“We’re not against the Christmas lights display. We’re not trying to shut it down. I couldn’t shut it down even if I wanted to. These are private homeowners doing something on their private property. But we want to make it safe and enjoyable for everyone,” she told this newspaper.

Arguments aside, the lights can be seen now through early January, with the area from 10th Avenue to 12th Avenue across the 80s particularly dramatically lit.

When asked if she, herself still loved the lights, Gargiulo didn’t hesitate.

“I can’t live without them,” she said. “Each year it brings such great energy and Christmas spirit to the community and to my family because it’s something that’s been a part of our lives for so long.”

Still, she is hopeful that more can be done to ease congestion.

“I really feel like this is the year where there’s going to be some serious action taken to get some support for the people that live in the area,” Gargiulo said. “It’s just too good of a tradition not to.”