Walk with us from Coney Island to Sheepshead Bay How we long for a swim in the ocean on Coney Island Beach. But the water won’t be warm again until June.

We’re too chicken to join the intrepid Coney Island Polar Bear Club, whose members swim in the sea every Sunday from November through April.

The club’s membership is closed at this moment, its website says. Nevertheless, brave souls can now sign up for the group’s New Year’s Day Coney Island Polar Bear Plunge.

We miss the fun summertime stuff on terra firma as well — especially the famous Wonder Wheel, which has stopped spinning until mid-April.

The only way for us to alleviate them is to scour the weather reports and find a sunny day for a good long walk.

Blue skies bring a strong measure of charm to the Coney Island Boardwalk even when the weather’s chilly.

We miss the Sheepshead Bay shoreline too. The offbeat allure of Emmons Avenue sticks in our mind long after summer has fled.

The other day when we were pining for surf, sand and seagulls, we decided to see the Coney Island and Sheepshead Bay shorelines during a single stroll. It was a great way to shake off autumnal ennui.

It’s possible to walk from the Coney Art Walls on Stillwell Avenue to Sheepshead Bay’s Stella Maris Bait and Tackle in one afternoon — despite the fact that Daylight Saving Time is over and it’s dead dark around 5 p.m. Which way to the Dip-the-Dip?

We took photos to show you — to tide you over until the next time the sun’s out and you have time to take this stroll yourself.

Of course we made a beeline for the landmarked Wonder Wheel.

This piece of living history opened on Memorial Day in 1920.

The inventor originally called it the Dip-the-Dip, the Wonder Wheel’s website reveals.

It has 16 swinging cars — and eight stationary cars, which make it possible for people who are afraid of heights to ride it without panicking.

The Vourderis family has owned the 150-foot-tall Wonder Wheel since 1983.

Another Boardwalk icon, the Parachute Jump, is landmarked, too. The 262-foot-tall “Eiffel Tower of Brooklyn,” which is the steel tower’s nickname, has been out of service since 1965. But it’s lovely to look at. Which way to the shark tanks?

The city designated the Riegelmann Boardwalk, which is its formal name, as a scenic landmark earlier this year.

The designation is a long-overdue honor for the famous 2.7-mile walkway, which opened in 1923. But it does not give the city Landmarks Preservation Commission the power to stop the city Parks Department from replacing the wood planks of the fabled promenade with plastic slats and concrete. Oy vey.

Another eye-catching sight we passed on our Boardwalk stroll was the New York Aquarium building, which opened last summer. The $158 million, 57,000-square-foot aquarium expansion houses an exhibition called Ocean Wonders: Sharks! which nearly sidetracked us. What could be more alluring than sharks? Eighteen types of sharks and rays live there.

But we wanted to stay outdoors in the sunshine. So we headed down the Boardwalk to Brighton Beach. There, coat-clad people ate lunch outdoors at Cafe Volna and Tatiana, the popular Russian restaurants.

Other folks walked adorable dogs or sat, chatting, on benches. After reaching the Boardwalk’s end, we wound our way through the streets of Brighton Beach to Corbin Place. There, the sun lit up the facade of Scheuer House of Manhattan Beach, which provides affordable housing for seniors. In a couple minutes, we were at the edge of Sheepshead Bay — meaning the body of water, which had swans swimming in it — and the neighborhood called Sheepshead Bay.

Both were named after a local fish, Kenneth Jackson and John Manbeck’s book “The Neighborhoods of Brooklyn” says.

Have you ever seen a picture of a sheepshead fish? It has teeth that bizarrely look like they belong in a human being’s mouth.

A boulevard with a bait shop

There’s so much to see on Emmons Avenue, which runs along the edge of the bay. 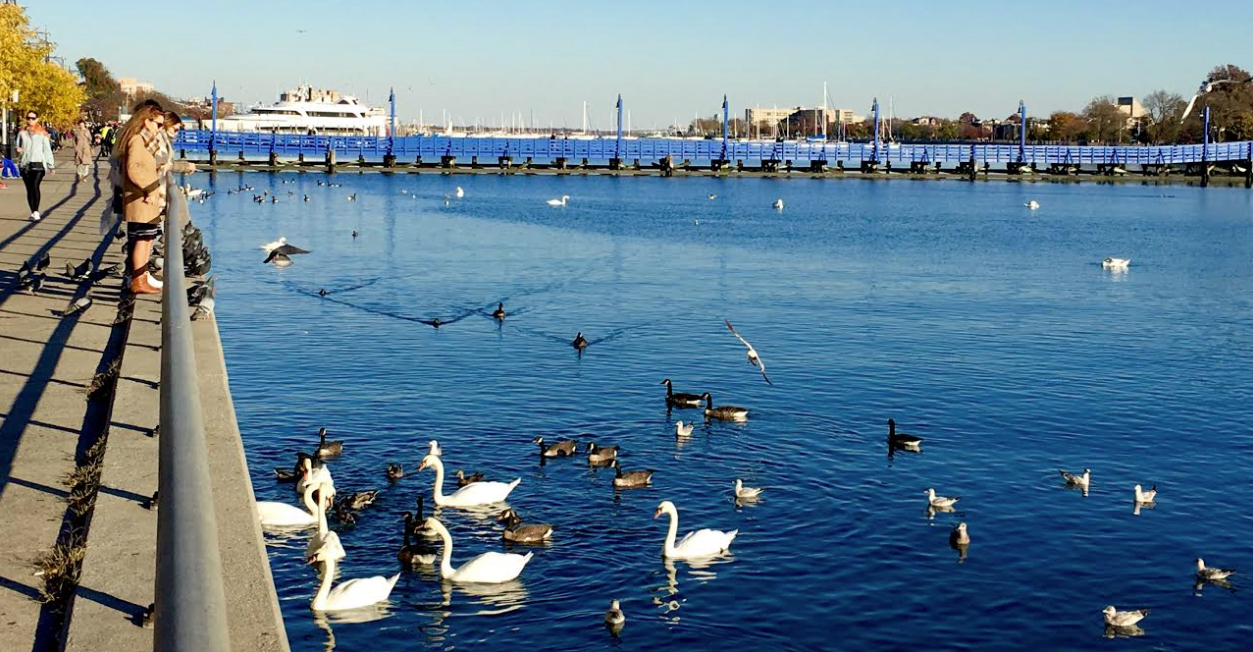 Here’s a factoid that evokes Depression-era New York: The city Department of Ports and Trade was in charge of Sheepshead Bay Piers after their construction in 1936.

The boats docked behind Stella Maris Bait and Tackle are very picturesque, too.

The shop at 2702 Emmons Ave., which is one of Brooklyn’s niftiest long-time businesses, has been in existence since 1947.