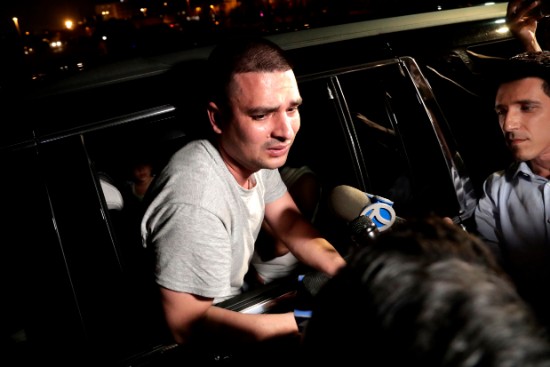 Pablo Villavicencio leans out of an SUV while talking to reporters after being released from the Hudson County Correctional Facility on July 24, 2018, in Kearny, N.J. Villvicencio was arrested on Friday after an alleged physical altercation with his wife. AP Photo/Julio Cortez

The undocumented immigrant who became a cause celebre this summer after being detained by ICE agents while delivering pizza to the Fort Hamilton Army Base in Bay Ridge was arrested and charged with a misdemeanor stemming from an incident in his Long Island home on Friday, authorities said.

Pablo Villavicencio, 35, is due back in court on Tuesday to face a charge of criminal mischief in the fourth degree.

Villavicencio allegedly pushed his wife against a wall during a dispute in their Hempstead home on Friday afternoon. Villavicencio also grabbed his wife’s cell phone in an apparent attempt to prevent her from calling 911, authorities said.

He was arraigned in court on Saturday. Bail was set at $500, according to the Gothamist.

It’s not clear if the arrest will have any impact on Villavicencio’s fight against deportation. That fight has been in limbo since the U.S. Justice Department dropped an appeal it had filed over whether he could remain in the U.S. while seeking permanent legal status.

Villavicencio, a native of Ecuador, made national news on June 1, when he was detained by ICE agents while delivering pizza to Fort Hamilton Army Base.

The unusual circumstances of his arrest led immigration rights advocates and Democratic lawmakers to rally to his side.

The Legal Aid Society took up his case and fought for his freedom. Villavicencio has lived in the U.S. for 10 years.

U.S. District Judge Paul Crotty ordered him freed two months after he was taken into custody.

The Legal Aid Society issued a statement in the wake of Friday’s arrest.

“The past several months, including Pablo’s detention and threats of imminent deportation, have been traumatic for the Villavicencio family. We are hopeful that this matter will be resolved and that Pablo will secure valid status with the continued assistance of our counsel,” the statement read.

Prior to Friday’s arrest, Villavicencio had no criminal record, authorities said.