Brooklyn DA Eric Gonzalez (pictured) announced today that a Brooklyn man has been indicted for the 2005 murder of his girlfriend. Eagle file photo by Rob Abruzzese
Share this:

A Brooklyn judge remanded a Bedford-Stuyvesant man to Rikers Island for the 2005 murder of his 22-year-old girlfriend.

Julius Esquilin was arraigned by Brooklyn Supreme Court Justice Danny Chun in a second-degree murder, second-degree criminal possession of a weapon and endangering the welfare of a child indictment on Tuesday.

Esquilin, 36, is accused of shooting Desiree Cofield in the head during a verbal dispute that began on the ground floor of the Greene Avenue apartment building they lived in, continuing to the top floor of the brownstone.

“The victim in this case was a young mother of two little girls who was allegedly taken from them by this defendant,” said Brooklyn District Attorney Eric Gonzalez in a press release.

A neighbor called 911 after Esquilin allegedly bellowed through the walls, “I know you heard that; call the police.”

When police and ambulance arrived, they found Cofield’s body on a couch with a single gunshot wound to the head and Esquilin “acting aggressively,” prosecutors said.

Police recovered a note allegedly written by Esquilin that said, “Even if I am gone, I still love all of my daughters and my big mouth baby mother, Julius.”

The couple, who had a history of domestic violence incidents, shared a child in common.

Yet, Esquilin was not arrested for Cofield’s murder until prosecutors recently conducted a thorough reinvestigation of the case that resulted in enough evidence to file charges, according to a law enforcement source.

The murder weapon was not recovered, prosecutors said.

If convicted, Esquilin faces up to 25 years to life in prison. 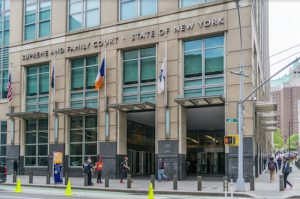