A genuine ace may be growing right here in Brooklyn as Cyclones right-hander Jaison Vilera continued his New York-Penn League dominance at Tri-City on Tuesday night. Photo courtesy of Brooklyn Cyclones
Share this:

While rumors abound that several members of the New York Mets’ vaunted starting rotation may be up for grabs at the July 31 trade deadline, there is a young pitcher on the rise within the organization right here in Brooklyn.

Cyclones right-hander Jaison Vilera might not be Jacob deGrom, Noah Syndergaard, Zach Wheeler or Steven Matz just yet, but the 21-year-old Venezuelan is starting to flash the type of dominance that projects him to be a future ace for the parent club.

Vilera, who won the organization’s Sterling Award last year as the top player on the Rookie-level Gulf Coast League Mets, extended his ongoing scoreless innings streak to 16 Tuesday night with a dazzling seven-inning stint at Tri-City.

As deGrom was making his National League All-Star appearance in front of a packed ballpark in our nation’s capital with millions more watching on television, Vilera was calmly taming the ValleyCats in front of 3,502 fans at Joseph L. Bruno Stadium in Troy, N.Y.

He yielded just two hits and a walk while striking out a season high-tying nine over seven flawless frames as Brooklyn cruised to a 5-0 victory, its fifth win in the past six games, two of which have come via Vilera’s penchant for stifling the opposition.

Vilera was economical as well as virtually unhittable, throwing 56 of his 86 pitches for strikes on a night he would get all the support he needed in the top of the first inning, when Wagner LaGrange delivered an RBI single to open the scoring and end Tri-City’s chances of beating the resurgent Baby Bums (17-14).

It was the third consecutive start in which Vilera went at least seven innings. He also tossed seven shutout frames at Aberdeen last Thursday, limiting the IronBirds to three hits while registering nine strikeouts against only one walk.

He has issued 10 walks while striking out 43 over his first 33 1/3 innings as a Cyclone, giving second-year manager Edgardo Alfonzo a true stopper and ace every fifth day in the rotation.

“The pitching staff looks much better than last year and that will be huge for us early in the season,” Alfonzo noted before Vilera gave up a run on two hits over four innings in his season debut against Hudson Valley on June 18 at MCU Park.

The hard-throwing kid from Caracas has yielded only three earned runs over 29 1/3 innings since, suffering his only loss of the year in a 2-1 setback to Aberdeen here on Coney Island back on July 5.

Even in that losing effort, Vilera surrendered two runs on five hits with two walks and eight strikeouts over seven strong frames, giving up a two-run double in the top of the fifth to mark the last time an opponent dented home plate against him.

Though he is still a few years away from impacting the Mets’ starting rotation, Vilera is likely headed to the New York-Penn League All-Star Game next month. His 1.86 ERA ranks second on the 14-team circuit among all qualifying starters and his 0.78 WHIP is third overall.

Last year he easily qualified for the GCL All-Stars after finishing second in the league in ERA and second in WHIP at 0.96. He also led the league with 56 strikeouts.

Before beginning his Minor League journey stateside, Vilera was just as dominant in the Dominican Summer League in 2016, going 4-0 with an 0.59 ERA in six appearances, including four starts, for the DSL Mets.

His cumulative numbers since joining the Mets’ organization as a non-drafted free agent as a teenager are just as startling.

Brooklyn fans interested in seeing a potential future ace for a Mets organization that is seriously considering dealing off some of its current studs can see Vilera back at MCU Park this weekend when the Cyclones host Lowell.

This, That and the Other Thing: Catcher Hayden Senger made his Cyclones debut as a defensive replacement for starting backstop Nick Meyer in the fifth inning Tuesday night at Tri-City. The Mets’ 24th-round pick out of the University of Miami in last month’s MLB Draft was hit by a pitch in his first at-bat and singled home his first professional run in the top of the ninth to cap the scoring for Brooklyn … Relievers Tommy Wilson and Ryley Gilliam finished off Vilera’s gem by tossing a scoreless inning apiece to close out Tuesday’s win, lowering the team’s bullpen ERA to an impressive 1.43 through the first 31 games of the 76-game campaign. 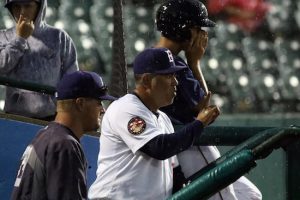