The Kings County Housing Court Bar Association (KCHCBA) honored five during its annual luncheon at Brooklyn Law School on Thursday where it honored five including its own president of 17 years Michael Rosenthal.

The luncheon was once again at Brooklyn Law School after being in Rocco’s Tacos for the last couple of years. It was the association’s largest-ever crowd for the annual event as judges, attorneys and court employees showed up in large numbers to support Rosenthal as well as the other honorees Hon. Jean Schneider, citywide supervising judge of the Housing Court; Hon. Heela Capell, Tanya Faye and late Court Officer Ben Fitzgerald.

Before Rosenthal was honored, he was introduced by Charles Wasserman and Stafford Liss. Wasserman explained how Rosenthal grew the bar association and its influence by encouraging attorneys from all organizations with all types of views to join so it wasn’t simply a “landlord’s bar association.”

“Michael encouraged monthly meetings, encouraged guest speakers who were clerks, administrators and judges from Housing, Civil and Supreme Court,” Wasserman said. “Mike encouraged meetings with judges and opened a dialogue that no other borough has ever seen before or comes close to with its attorneys. He made Brooklyn a friendly place and we can all agree that Mike has taken the bar association to another level.” Rosenthal spoke about taking over the association 17 years ago from previous President Harvey Lustig and some of the challenges it faced then. He talked about getting the Housing Court to remove daily and time consuming calendar calls, and helping attorneys to get secure passes into courthouses.

“There are going to be challenges ahead,” Rosenthal said. “The changes that are occurring —  some of which are good, some of which I don’t feel are good — we’ll see how they play out. I don’t take a back seat and if I think something is not working, I make my voice heard.” “You all know that these are interesting times in the Housing Court,” Judge Schneider said. “The good thing about an organization like this is that it creates a pathway for communication. We don’t all agree with each other all the time, but we talk. You talk and through our communication and feedback, I think the institutions we care about become better.”

Before Hon. Bruce E. Scheckowitz introduced Hon. Heela Capell, Rosenthal joked that she had been nominated prior to her being appointed to the bench. Judge Capell explained that she is proud of her work as a court attorney and was glad to be recognized.

Tanya Faye thanked Judge Schneider and Judge Anthony Cannataro, the administrative judge for the NYC Civil Court, for recently implementing a program that made her part flow more smoothly. She joked that thanks to them, she finally feels like an expeditor.

“When I first found out I was getting an award as an expeditor I was kind of confused because just the week before a litigant yelled at me, ‘What do you mean you’re an expeditor? We don’t go anywhere,’” Faye joked. “He sat there all day and didn’t see a judge and I thought, ‘he’s right.’ I promised him that next time they would come in we would have a new system and he wouldn’t have to sit here and stare at me all day and it worked out that way.” The most emotional portion of the luncheon came when Court Officers Cathy Clifford and Lt. Tawya Young presented an award to Maryann Fitzgerald, the wife of the late Court Officer Ben Fitzgerald who died last October.

“If Ben were here, this was not his thing,” Young said while shaking her head. “He would totally shy away from the attention. He didn’t even want us to make a fuss about his birthday.

“Ben showed me that if you have the ability to help someone in need, you should. He wasn’t just a supervisor or a colleague, he was family. He was uncle Ben. My hope is that I continue to live out his legacy and pass it on to staff that come in the future — this job is about professionalism and serving the public and that we should always maintain that human element of what we do and who we serve.” 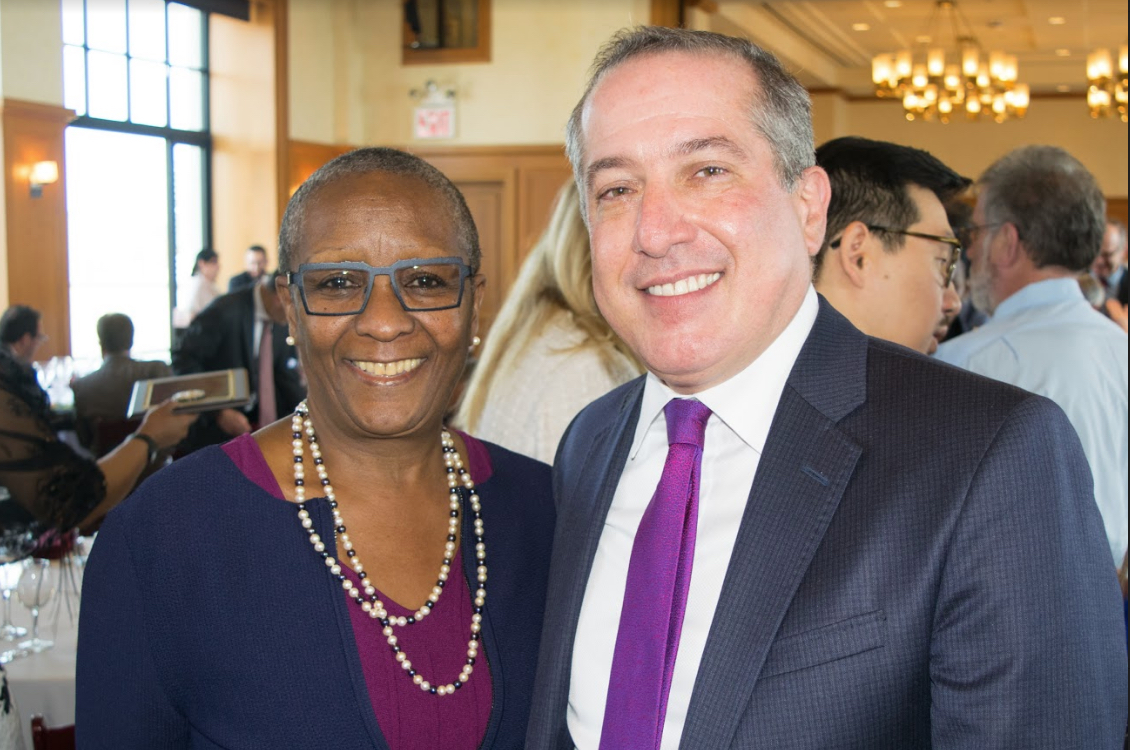